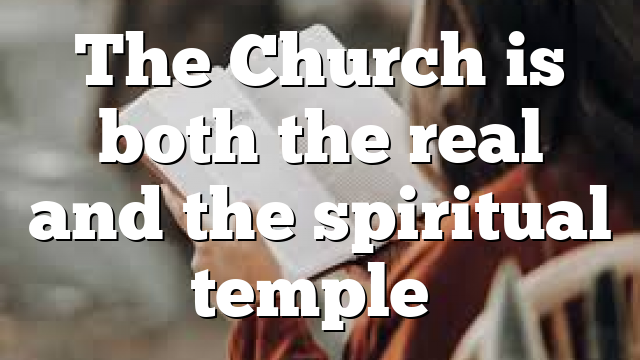 The Church is both the real and the spiritual temple of God. The physical temple which was in the physical city of Jerusalem was just a mere shadow of the Church

It’s the spiritual temple (that’s the Church) that the Bible Prophecy was speaking about in Rev. 11:1-2. And, to the fulfillment of that prophecy, the members of the Church has been divided into two groups, namely :the Inner and the Outer Courts, Israel and Judah, the living in Christ and the dead in Christ etc.

The backslidden members of the Church are the Outer Court, the spiritual tribe of Judah, the dead in Christ, the waste places of Zion etc. God has separated the Holy Spirit from these bereaved Christians and have temporarily handed them over to be humiliated and ridiculed by the unbelievers.

The absence of the Holy Spirit in the lives of these afflicted Christians has caused them to return like dogs to their former sinful vomits. They have been forced to return to lifestyles more sinful than the ones from which they were previously delivered. The departure of the Holy Spirit, has caused the demons that used to possess these backsliders to reinforce and return in sevenfold, thereby making their lives more miserable than before.

These backslidden Christians have been the worst hits in the Great Tribulation, which has been going on for decades now. They are the ancient ruins and the former devastations of Jerusalem that must be rebuild. They are the dead in Christ and the beheaded saints, billed to be resurrected in these last days.

No devil can close any door opened by God

No devil can close any door opened by God to you. Devil can only raise adversaries and oppositions to resist your breakthroughs.The provision is…