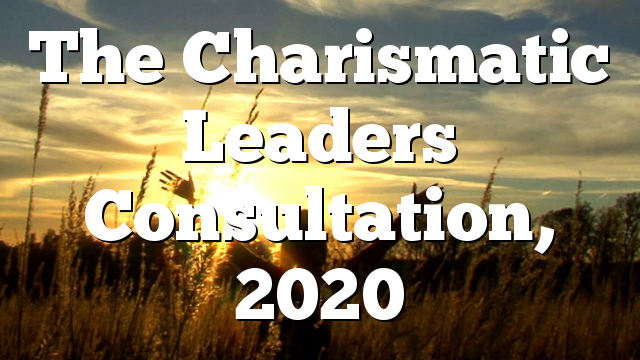 This years Charismatic Leaders Fellowship Conference, now called “consultation,” (CLC) was held in Augusta Georgis, February 24-27. Yearly, this group of Charismatic leaders meets to discuss news and issues about the world-wide Pentecostal/charismatic movement. The group was originally founded in 1970 by Dennis Bennett, of Nine O’Clock in the Morning[1] fame, to discuss and work out controversies within the new Charismatic Renewal.

The meeting’s location was at the Alleluia Covenant Community School. Coincidently, several of the presentations at the consultation were about covenant communities. Covenant communities are fairly new to the Church, and are attempt to follow the example of the Jerusalem Christian community depicted in Acts.[2] For reasons unclear, Early Christianity followed the model of Jewish monasticism for which there is no New Testament model or mention,[3] and bypassed the covenant community described in Acts. Most covenant communities are ecumenical, as is Alleluia. Alleluia is predominantly Catholic, but led by a Methodist layman, Mr. Bob Garrett. In recent years he has gained an international renown for his leadership in furthering Christian and Spirit-filled ecumenism.

Like the Jerusalem Christian community of described in Acts, covenant communities are groupings of families, sometimes with attached singles, that bind together with certain rules to further their Christian life and holiness. An interesting example of this; Alleluia teens are not allowed to date as couples, but frequently go out as a group for sport events, field trips, etc. This provided plenty of opportunities for budding romances – but avoids the awkwardness and dangers of couple dating. (Do I hear the moans of anxious parents for similar rules in their churches?)

Covenant families live in close proximity, and this assists not only in prayer time together, but mutual help in such thing as baby-sitting and home schooling. Families worship together during the week but go to their denominational churches on Sunday.[4] All of this makes life more socially engaging than normal, and more importantly, assists in avoiding much of the corrosive secularism of contemporary society.[5] One of the benefits of having the CLC meet at the Alleluia Community is that on can observe some of these dynamics in action.

The members of the CLC who came to Augusta came from the United Sates and many parts of the world. We were all hosted by the families of the Alleluia community, which eliminated hotel charges, but most felt that is it a real delight to live for a few days within a covenant community. My host this year was a local Lutheran pastor, the Rev. Mike Freed and his lovely wife Vera. Rev. Freed is an elder of Alleluia as well as an active pastor to nearby Ascension Lutheran Church. I came one day early and had the pleasure of attending his Sunday service and ministering healing at the end of the service.

This year’s CLC had several issues on the table. One was, coincidently, a presentation and description of several world-wide networks of covenant communities. A presentation was given by members of the Work of Christ Covenant Community of Lansing, Michigan, one of the first ever birthed from the Charismatic Renewal, This community sprouted other communities under the name “Sword of the Spirit” which now have ninety- three communities in forty-three countries in Asia, the South Pacific, Latin America and Europe.[6] These communities are self-governing, but under similar covenant rules. Seventy percent of its members are Roman Catholic, with 5% Oriental Catholic (Coptic) and the rest Protestant.

Another network of communities talked represented at the consultation was the “European Network of Communities,” ENC. The Polish communities within the ENC have grown greatly by the use of the Alpha Course, first developed in England.

But covenant communities was not the only topic of this year’s CLC. A very informative session was given by David Mahan on the LGBTQ movement and its agenda. It was both eye-opening, and depressing. David exhorted Church leaders to take more active stands against the LGBTQ agenda, especially in schools. It was suggested that one effective way for Christians to contend against it is to run for local school boards. These are elected into office most often by a mere handful of voters who care enough to vote on the issue – a great and “actionable” insight. (My own opinion is that it will take a next coming great revival to cancel the myths and damage of the LGBT successes.

Another session was dedicated to youth ministry. Within this Mrs. Karol Sobczyk from Poland gave a wonderful and emotion filled presentation on youth ministry in that country. All members, especially us “elders” were touched by her enthusiasm and humility. (pic of young woman in black dress)

Yet another session was dedicated to the rise of spiritual direction. This ancient Christian discipline is well known among Catholics, but is now spreading among Protestants with much good fruit. The CLC group as given a detailed presentation of the local spiritual direction school operating out of the Alleluia Community – led by an Evangelical couple.[7] The director of another group, “At His Feet Ministries” Arizona, described their tweaks on spiritual direction, and again, it is layman led and Evangelical in orientation.[8]

The Italian Catholic deacon, Matteo Calisi, who is the Vatican coordinator for the Catholic Charismatic Renewal, filled us in on the goings on of CHARIS, the Vatican charismatic coordinating agency. I reported on CHARIS last year, to whit, that the Pope intends that all Catholics be Baptized in the Spirit. He reported that the Pope’ letter to the Bishops on this topic was largely unknown and bottled up in the Vatican Curia – the Vatican’s administrative agency which is made up of very traditional clergy. Many members of the Curia are hoping Pope Francis will soon die and the “charismatic threat” pas away.

PRAY that the Pope’s letter be quickly released and acted on. Imaine what the world would be like if a majority of Catholics were Spirit-filled. Now only about 12% are, mostly in Africa and Brazil.

One of the high points of the CLC consultation was ministry time by Pastor John Arnott, of Catch the Fire Church, formerly the Toronto Airport Vineyard, were a strong revival broke out in 1990s. His ministry time with us was powerful and many of the participants “fell under the power” as he laid hands on them. I was strongly touched by his ministry, but did not quite hit the carpet, and discovered that in the following week I was newly energized in my writing ministry – I had been down in the dumps from difficult circumstances in my life.

This year I did not give a formal presentation, but was invited to give a three minute talk on my newly published work, Aging Gracefully With the Graces of Healing Prayer, (Lexington: Emeth, 2019) which I gladly obliged. Last year several members of the CLC asked me to bring a few card stock models for their kids and grandkids, as I had done four years ago. I obliged also in this “sacrificial” ministry of model building and delighted in giving them away, to both the CLC members and to the staff of the Alleluia school where I deposited a fine model of the Hubble telescope and another of the Di Vinci flying machine.

All in all this was one of the finest and most informative CLC meetings I have ever attended, and I believe many others felt the same way.

[1] (Plainfield: Logos International, 1970). This may be considered the seminal work of the Charismatic Renewal.

[2] They are not original to the modern era. Count Zinzendorf of Saxony (Germany) established a covenant community on his family estate in 1722, called Herrnhut. Most were Moravian Protestants, but the community was open to all denominations. From Hernhut the world’s first Protestant missionaries were launched.

[3] The Essenes, who must have been well known to all of the New Testament writers, and the more philosophical Therapeutae, of the Egyptian Jewish community.

[5] Under the rubric of separating from (anti-Christian) secular society, much attention has bee given to the book by Rod Dreher, The Benedict Option: A Strategy for Christians in a Post-Christian Nation (New Your: Sentinel, 2018).

PASTOR is in COURT for ‘Satanic Islam’ sermon