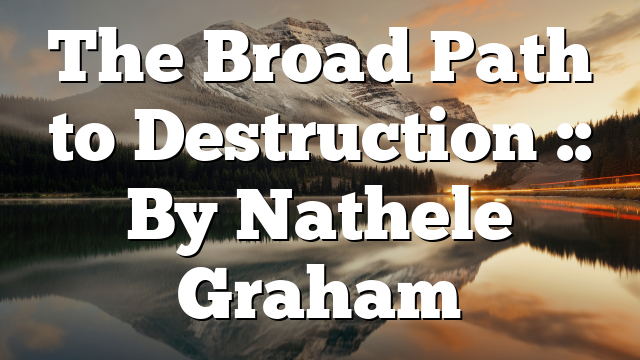 It’s very easy for most people to find the broad path that leads to destruction. It’s a well-beaten path and clearly the way many feet have traveled. You don’t need GPS to get the directions to that path; just follow the crowd. Watch movies that promote violence, sexual promiscuity, and other sinful acts, and you’re on your way. You can also find the directions in secular music that glorifies the ways of the world. If you’re tempted by sin, instead of asking a well-grounded Christian for directions, ask a worldly person and you’ll get directions to the broad path that leads to destruction. Scripture will not guide you to that road but will guide you to the strait gate that leads to life eternal. Keep Jesus’ words in your heart and follow Him on the path to the strait gate.

Not long before He was going to offer Himself as the final sacrifice for our salvation, Jesus had a talk with His disciples. He told them He was going to prepare a place for them (and us). The disciples had followed Him for three years, but they still weren’t clear about what was about to happen.

They were confused by Jesus’ words, and it was Thomas who asked Jesus how to find the way He spoke about rather than asking Peter or Matthew, who were as confused as he was.

Jesus will never lead us astray. “Jesus saith unto him, I am the way, the truth, and the life: no man cometh unto the Father, but by me” (John 14:6). We need to take heed to these words seriously. Faith in Jesus is the only way to find eternal life.

The Sermon on the Mount holds many lessons taught by Jesus, and we need to pay attention to His words. After stating that the path to eternal life is found by following the “strait and narrow path,” He warned against false prophets.

“Beware of false prophets, which come to you in sheep’s clothing, but inwardly they are ravening wolves” (Matthew 7:15).

False prophets have always led people down the broad way to destruction. God is very serious about not following false prophets and what their punishment will be.

“But the prophet, which shall presume to speak a word in my name, which I have not commanded him to speak, or that shall speak in the name of other gods, even that prophet shall die” (Deuteronomy 18:20).

That’s pretty serious. Thank God for His grace and mercy through Jesus. It’s very important not to allow yourself to be swayed by the teachings of the false prophets of today who write books with new ideas and many pastor mega-churches. Scripture is God’s word and His truth. Just because someone writes a book doesn’t make them a true follower of Christ. Today there are many authors and leaders of mega-churches who promote the “prosperity gospel,” which isn’t found within the words of Scripture.

“As ye have therefore received Christ Jesus the Lord, so walk ye in him: rooted and built up in him, and stablished in the faith, as ye have been taught, abounding therein with thanksgiving. Beware lest any man spoil you through philosophy and vain deceit, after the tradition of men, after the rudiments of the world, and not after Christ” (Colossians 2:6-8).

Purpose-driven, kingdom now, replacement theology, name-it-and-claim-it, and other false teachings will lead along the broad way to destruction. New Age ideas aren’t found in Scripture, nor is contemplative prayer or Yoga. The only way to protect yourself from these lies is to study truth. God’s truth is found in Scripture.

When we think of following the path of destruction, quite often we think of those who live a destructive lifestyle filled with illegal drugs, drunkenness, promiscuous lifestyles, and other such activities. We are moving quickly to the end of time, and Satan and his minions are becoming more noticeable in their attempts to destroy humanity. Satan can cause many conflicts in our minds and make sin seem acceptable. We can’t expect people of the world to follow God’s truth, but for people who have professed Christ as their Saviour, sin isn’t acceptable. Confusion comes when we deviate from Scriptural truth and compromise God’s word.

It’s a sign of the times that many pastors don’t view sin as a problem but teach user-friendly sermons that don’t make the pew-sitters uncomfortable. There are even pastors who are “transgender,” which is an abomination that openly mocks God. There’s no way they can be trusted to preach God’s truth while embracing a life of sin. If we stand firm in the Lord, we won’t be detoured off of the strait and narrow path that God desires us to follow. We are in a spiritual battle.

“For though we walk in the flesh, we do not war after the flesh: (for the weapons of our warfare are not carnal, but mighty through God to the pulling down of strong holds;) casting down imaginations, and every high thing that exalteth itself against the knowledge of God, and bringing into captivity every thought to the obedience of Christ; and having in a readiness to revenge all disobedience, when your obedience is fulfilled” (2 Corinthians 10:3-6).

As Christians, we need to use God’s truth as a filter for our thoughts, words, and actions. We need to conform ourselves to God rather than trying to conform God to our sinful ways. If you aren’t strong in your Christian walk, you can be easily beguiled by Satan’s lies. He has had centuries upon centuries of watching humanity and becoming familiar with our weaknesses. His lies to humanity began in the Garden of Eden.

God had given Adam one rule: “And the LORD God commanded the man, saying, Of every tree of the garden thou mayest freely eat: but of the tree of the knowledge of good and evil, thou shalt not eat of it: for in the day that thou eatest thereof thou shalt surely die” (Genesis 2:16-17).

God gave this command to Adam prior to Eve being created. It was up to Adam to be sure that Eve understood and followed God’s word. Some time after Eve was taken out from Adam, she had a conversation with Satan, which is always a bad idea. He appeared to her in the form of a serpent. Satan lied to Eve, who believed his lies instead of God’s truth. God said don’t eat the fruit of the tree of knowledge of good and evil because you will die.

“And the serpent said unto the woman, Ye shall not surely die: for God doth know that in the day ye eat thereof, then your eyes shall be opened, and ye shall be as gods, knowing good and evil” (Genesis 3:4-5).

The broad road that leads to destruction was open for travel. Satan twists God’s truth into a ball of confusion, and those who have no grounding in God’s truth are easily detoured to the broad way of destruction. Satan lied, Eve believed him, Adam joined in sin, and Paradise was lost. Adam and Eve did not become like gods. God was right (as always). Death entered creation. Adam and Eve didn’t drop dead immediately, but their sin separated them from God, and the death they experienced was soul death. Ever since that time, anyone with no faith in the Messiah faces eternal death. Satan will always lead a person to sin and the broad road to destruction. Study God’s word in order to stay on the path that Jesus walks.

The broad road to destruction may come by someone knocking on your door and presenting you with Mormon or Jehovah’s Witness lies. Beware, and don’t be deceived.

“But I fear, lest by any means, as the serpent beguiled Eve through his subtilty, so your minds should be corrupted from the simplicity that is in Christ. For if he that cometh preacheth another Jesus, whom we have not preached, or if ye receive another spirit, which ye have not received, or another gospel, which ye have not accepted, ye might well bear with him… For such are false apostles, deceitful workers, transforming themselves into the apostles of Christ” (2 Corinthians 11:3-4 & 13).

Many have been led astray by these nice-looking and very sincere people who earnestly are deceived. Sadly, they desire to deceive others. Study Scripture and don’t waiver from following Christ along the strait and narrow path. If anyone preaches a different Gospel than the truth found in Scripture, don’t listen to them. Their lies are from Satan.

“And no marvel; for Satan himself is transformed into an angel of light. Therefore it is no great thing if his ministers also be transformed as the ministers of righteousness; whose end shall be according to their works” (2 Corinthians 11:14-15).

Keep your mind and heart on Jesus, and don’t be deceived.

When we come to a true faith in the death, burial, and resurrection of Jesus Christ, our life should reflect that faith. We will continue to sin, but we have the assurance that confessing our sin to Jesus will bring forgiveness.

“If we confess our sins, he is faithful and just to forgive us our sins, and to cleanse us from all unrighteousness” (1 John 1:9).

What a blessing. If we confess our sin to Jesus, He forgives. When we turn away from the broad way that leads to destruction and follow Jesus on the strait and narrow road that leads to eternal life, we have Christ’s assurance that He will forgive us.

As we near the Rapture, the days will become more and more wicked as the world embraces Satan’s lies. As this happens, Christians need to become more sure in our walk on the strait and narrow path – not following false prophets, the latest fad, or any doctrine of demons. Christ is our example, and we need to follow Him closely and avoid the broad path that leads to destruction.

God bless you all,

All original scripture is “theopneustos,” God-breathed.

The post The Broad Path to Destruction :: By Nathele Graham appeared first on Rapture Ready.

J.P. Moreland, A Simple Guide to Experience Miracles: Instruction and Inspiration for Living Supernaturally in Christ (Grand Rapids, MI: Zondervan Reflective, 2021), 274 pages, ISBN 9780310124191. Why is a firm conviction in the ongoing reality, power, and love of God necessary for biblical Christianity? In this book, J. P. Moreland successfully presents principles, arguments, and […]