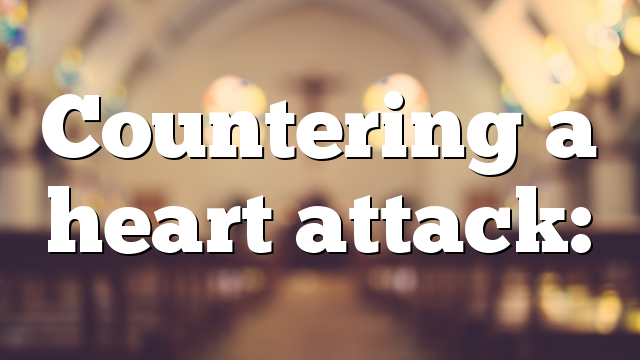 In this posting I wish to give the reader guidelines on how to pray for a person experiencing a heart attack. As we age, and our friends age with us (what an amazing coincidence!) we are more likely to find ourselves in a place where a heart attack is happening.

First, let me begin by recounting an incident that happened to Carolyn and me about thirty years ago. It occurred shortly after Carolyn and I had completed a course on the Hunter’s method of command prayer. Carolyn and I were at her son’s wedding in Baltimore. He had invited his favorite professor from his college days to attend. When the elderly gentlemen got near the church he began having chest pains and he sat down at a brick ledge just to the side of the church. As Carolyn and I approached someone had called 911 and a policeman was already there. The policeman was in communication with the ambulance on his radio. As he monitored the professor’s vital signs he said to the ambulance medic, “Hurry up, he needs help right now.”

Carolyn and I immediately started to pray for the professor. Carolyn prayed in tongues, and I paced back and forth, a few feet from the scene, praying aloud, but not shouting, “I rebuke the spirit of death from this place. I speak to the heart, and command you to be well, repaired and restored in Jesus’ name.” Carolyn varied between tongues and command prayer. We continued in that vein for several minutes.

The policeman again said on the radio in an irritated voice, “If you guys don’t get here in a few minutes, he’s gone.” (The dialogue is approximate, this happened 30 years ago, but not exaggerated in any way.)

Carolyn and I continued praying and commanding healing in Jesus’ name. I placed my hand on the professor’s shoulder and continued praying out loud. The man was unconscious and it did not occur to me to ask the policeman for permission to lay hands on the person for prayer. He knew we were praying, and seemed to appreciate the fact. When the ambulance finally showed up, it had been delayed by a traffic accident along the route, we prayed for wisdom for the medics and the doctors at the hospital.

Then we went in to the service, which proceeded with just a brief delay. Most of the participants did not know about the drama that had just occurred at the side of the church. Several hours later at the reception Michael got word from his professor that he was doing well. The blood work showed he had a major heart attack, but his heart was beating strong and normally, as if he had not had one.  PTL! (This account is found in Carolyn’s book, Watching God Work: If there are slight variations in the vocabulary and description, well, it is just like the synoptic Gospels!)[1]

Several years ago, as I was putting the finishing touches, Agnes Sanford and her Companions, I reread Mrs. Sanford’s classic, The Healing Light (1947). I had forgotten that there she described the healing of a person dying from a heart attack. It gives a wonderful account of Mrs. Sanford’s “combined” healing technique of gentle command healing, graced visualization, mental prayer, and the laying on of hands.

The incident occurred about 1945. Mr. Williams, her next-door neighbor, was a cessationist and did not believe in healing prayer. He suffered from rheumatic fever and had a damaged and weak heart. One night he returned from work at point of death, and his children rushed over and begged Agnes to come and pray. She found Mr. Williams slumped on a chair in living room, his heart beating furiously and erratically. She went over:

As soon as my hands were firmly on his heart, I felt quiet, serene, in control. Forgetting the heart, I fixed my mind on the presence of Our Lord and invited Him to enter and use me. Then, Mr. Williams being quite unconscious, I talked informally to his heart, assuring it quietly that the power of God was at this moment re-creating it and it need labor no longer. Finally, I pictured the heart perfect, blessings it continuously in the name of the Lord and giving thanks that it was being recreated in perfection. Soon I could feel the hearts beats becoming more quiet and regular. I could even feel that strange inner shifting that reports the rebuilding of flesh and tissue.”[2]

When the doctors next examined him they were astounded that it had gone from grossly swollen to normal size and rhythm. Now of course, my actions and Mrs. Sanford’s were not identical, but let me offer some guidelines:

Lastly, I am reminded that the standard Red Cross First Aid course includes actions taken for a heart attack victim.  Of course calling 911 is the first step. This is followed by chest compressions and infused breathing, which most person are now familiar with. How would these actions be combined with healing/command prayer, especially if there is only you and the heart attack victim in the room? I would do the prayers after I made a quick call to 911 and as I was doing the chest compressions? I have not had the opportunity to try it. Perhaps, “one, two, three, “heart be healed in Jesus’ name”… six, seven eight, “spirit of death be gone”… The key element is to do all that is medically possible while concurrently inserting prayer.

Order at: www.voe.org This is without doubt the most power-packed and informative resource released by Perry Stone in years! He and Bill Cloud combined…