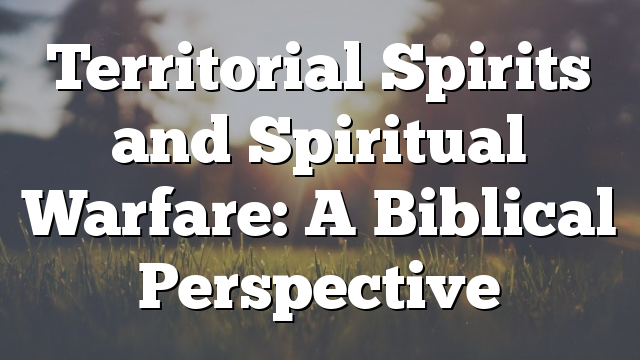 Larry Lea’s first highly publicized spiritual warfare event at Candlestick Park in 1990 had as one of its goals the expulsion of “territorial spirits” from San Francisco. Going beyond the idea that specific demons are given responsibility in the oppression of individuals, the doctrine of “territorial spirits” maintains that demons are also over geographical areas, as well as national, ethnic or tribal, religious, and even generational groups. According to this view it is necessary for Christians to identify these spirits and expel them.

The acceptance of such a doctrine may have a profound effect on the evangelistic tactics and strategy of a ministry. Larry Lea invested millions of dollars in this belief. But there are many other examples that can be cited. Brazilian evangelicals mobilized a national movement and petitioned President Fernando Collor de Mello to remove a day of national homage to a religious statue, saying that their nation is under a curse because of institution­alized idolatry to the demon behind the idol. In a Brazilian book on spiritual warfare, Gilbert Pickering wrote of a personal encounter with a demon that oppressed an Amazonian tribe, and how his victory over the spirit led to successfully evangelizing them (this is not an uncommon episode among trib­al missionaries). An unnamed (for obvious reasons) expert in Muslim evangelism gives a detailed account in private conversations of how he believes that Islamic rituals came from Islam’s founder’s occult experience with a powerful demon. His opinion is that the demon uses these rituals to shackle its adherents in spiritual darkness. A Chris­tian man (who overcame the temptation) on one occasion felt a tremendous sexual lust toward a baby for no appar­ent reason. He later discovered that his great-grandfather was a voracious child molester who abused his own granddaughters. He renounced the sin of his predecessors at a prayer meeting designed for the breaking of generational curses. Frank Peretti dramatized a scene where a slithery demon of lust accompanied a temptress who unsuccessfully tried to bring down the morals of a dedicated pastor.

I was first exposed to the idea of ter­ritorial spirits ten years before Larry Lea’s meeting when some well-mean­ing Christians called a weekly prayer meeting to “bind Satan from the San Francisco Bay Area and bring godliness to public life through spiritual warfare.” I was impressed by their concern over the rise of non-Christian influence over the region. They were meeting to estab­lish godliness in the school systems, regional politics, the media, and to dethrone the spirit of homosexuality from its capital city, San Francisco. I was happy to accept an invitation to participate with them, but I was very disturbed by the time left the meeting. I had assumed its purpose was for intercessory prayer, but the hour was spent instead rebuking Satan from all of the above areas by addressing him directly and “binding” him verbally. The thought struck me, “This group spends more time talking to Satan than to God!” Since then, this style of spiritual warfare has proliferated while the school systems, politics, media, and especially the homosexual movement have gone much further away from the goals of that prayer meeting.

Is there really a demon of homosexu­ality over San Francisco? Does a demon regulate the teaching of Islam? Does a spirit of sexual abuse victimize succes­sive generations of a family line? Is there a specific demon of adultery in womanizers or a spirit of alcohol (demonic, not distilled!) in alcoholics?

The Bible calls drunkenness and sexual immorality “works of the flesh” in Galatians 5:19-22 (NASB). Colossians 3:1-10 instructs us to “lay aside” such deeds as part of the corrupt “old self” that was crucified with Christ. We are never told to deal with such behaviors by exorcising the “spirit of lust” or the “spirit of alcohol.”

Now, Jesus did attribute the homici­dal motive of His opponents to their association with their “father, the devil” (John 8:44, NIV). John also said that “Cain belonged to the evil one and murdered his brother” (1 John 3:12, NIV). Paul wrote Timothy that those who oppose the Lord’s servant are in “the trap of the devil, who has taken them captive to do his will” (2 Tim. 2:26, NIV). Certainly, then, demonic influence is involved in the choice to sin, and if a person repeatedly chooses sin he or she becomes a slave of the Devil. But this is not the same as saying that certain behaviors are the works of certain spirits, or that those behaviors are eliminated by rebuking such spirits. We become slaves of sin by choosing sin, and we only become free of sin when — by God’s grace — we choose obedience to God. Thus, “the devil made me do it” is no excuse for sin.

What about corporate demonization over regions, nations, cities, ethnic groups, and generations of families? First, we must acknowledge that there is some biblical evidence forterritorial spirits. Jesus called Satan the “prince of this world” (John 12:31) while Paul named him “the prince of the power of the air” (Eph. 2:2) and “the god of this world” (2 Cor. 4:4). “He leads the whole world astray” together with his angels (Rev. 12:9, NIV).

A strong argument for regional demonization can be found in the three-week delay of the angelic messenger to Daniel who was opposed by “the Prince of Persia” (Dan. 10:12-13). This is understood by many scholars to mean an evil spiritual prince over the Persian nation, race, and land. Two classic references to satanic domination over earthly kingdoms are those attrib­uted to Satan when Isaiah and Ezekiel are addressing the kings of Babylon and Tyre (lsa. 14:12-14; Ezek. 28:12-16). An interesting case of diabolic attachment to a geographic location is found in the “Legion” (Mark 5:1-20) begging Jesus not to send them out of the region. The glorified Lord called Pergamum the place where “Satan’s throne is” (Rev. 2:13, KJV). Jesus also spoke concerning the religious life of Smyrna, identifying the synagogue there as belonging to Satan (Rev. 2:9-10).

Interpretations of such passages may vary among sincere Christians, but one thing is certain: belief in territorial spirits should not be considered aberrant, as is, for example, the health and wealth gospel. The issue should never become a point of division among brothers and sisters in Christ.

But what about generational spirits? There are five explicit references in the Old Testament which promise that God will visit the fathers’ sins upon the chil­dren with punishment (Lev. 26:39; Jer. 32:18), even to the fourth generation (Exod. 20:5; 34:7; Num. 14:18). As a result of the sin of his father Ham, Canaan’s descendants were cursed by Noah, and Jacob feared a curse from Isaac over his family line (Gen. 9:25; 27:12). To support the doctrine of generational spirits one must infer that the visitation of punishment and the fulfill­ment of the curse consist in a demonic presence visited upon succeeding gen­erations as a result of sin. This also is not an aberrant doctrine, but it does require an interpretive leap. Some evi­dence may exist in the fact that after Samuel’s curse upon Saul “an evil spirit” (1 Sam. 18:10) tormented Saul. But this Scripture does not make conclusive an argument for a demon becoming attached to a cursed generation.

Where teachers of these doctrines depart from Scripture more definitely is in the practice of trying to expel these spirits. The Bible does show Jesus and Paul verbally rebuking demons which physically possessed individuals. Each of these individuals was freed, and, like the Gadarene, was found to be “in his right mind” after the expulsion.

It is important to note, however, that neither Jesus nor the disciples ever ver­bally rebuked (or taught others to do so) national, ethnic, behavioral, or generational demons. The Bay Area demons have been thoroughly rebuked but the region is still not in its “right mind,” while materialism, immorality, and irreverence are common behavior.

Verbally binding the enemy is also employed in attacking invisible spirit thugs of the dark world. One pastor I’m aware of opened every service say­ing, “Satan, I bind you from hindering this gathering in Jesus’ name.” A broth­er in Christ with good intentions is subtly led astray when Satan is the first one he speaks to in a service of wor­ship to God.

Such “binding” is based on scriptures that were never meant to be applied as a formula of verbal rebuke. While Jesus did say the strong man must be bound in Matthew 12:29, this happens by the arrival of God’s more powerful kingdom. This metaphor in no way instructs believers to change the world through verbal rebuke.

In Matthew 16:19 and 18:18 Jesus speaks of believers having authority to bind which affects both heaven and earth. In 18:19 church discipline (deal­ing with professing Christians) is the subject of binding and loosing, not spir­itual warfare (dealing with the demonic realm). In verse 20 this is done by agreeing in prayer to God, not talking to Satan.

The Lord did say, however, that there is a conflict of kingdoms (Matt. 12:22-30). Paul instructs the Ephesian church about spiritual warfare against the schemes of a dark celestial hierarchy composed of “the devil,” “rulers,” “authorities,” “powers of this dark world,” and “spiritual forces of evil” (Eph. 6:12, NIV). (Perhaps territorial spirits are included in this list.)

To fight this war, Paul tells believers to “stand” against them in God’s power using His armor (Eph. 6:11, 14). The weapons he lists for battle are: honesty, righteousness, witnessing, assurance of salvation, belief in God, and proficien­cy in the Scriptures. But wait, isn’t this simply obedient Christian living? Where’s the mystical mumbo jumbo — the direct encounter with the supernatural? It would appear that Christians who effectively live out their faith assault satanic oppression of a society with an onslaught that verbal rebukes cannot approach.

After describing the Christian’s spiri­tual armor Paul then emphasizes the importance of prayer. It is instructive to examine the nature of that prayer. He first requests prayer “in the Spirit on all occasions with all kinds of prayers and requests” (Eph. 6:18). Victory over a demonic hierarchy involves persistence in talking to God. Then he follows by requesting prayer for “all the saints.” By praying for one another, Christians bat­tle demons. In the next two verses, Paul requests prayer twice for himself as a missionary. Prayer empowers the preaching of the gospel.

Maybe this is what happened in Northampton, Massachusetts where a monument states that there Jonathan Edwards encountered the Devil and defeated him. In Ireland, Patrick encountered the druid witches, and the Celts recognized God’s power as supe­rior. History notes that following both events, multitudes turned to Jesus Christ These men spent considerable time with God, but I’ve never seen any record of their talking to the Devil. Bib­lically and historically, then, spiritual battles are won by living for God and talking to Him in earnest intercession rather than by talking to Satan.

Eric Villanueva is a cross-cultural mis­sionary and graduate of Gordon-Conwell Theological Seminary.

The Anti-Christ will come from Syria. (Finis J. Dake)

The Anti-Christ will come from Syria. (Finis J. Dake)