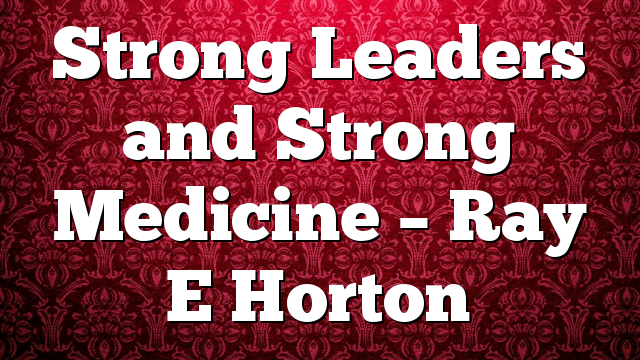 Strong Leaders Can Be Like Strong Medicine – by Ray E Horton

Strong leaders are often like strong medicine, sometimes helpful but usually producing bad side effects. I thought of this after hearing about what a friend experienced in a church. Before I come across too negative, let me say that I’ve grown much under strong leaders who love the Lord and won’t compromise the Word, who are willing to exhort, but are also humble. But they are few and far between.

Both strong medicine and strong leaders are usually invasive and arrogant, and a little too much of either can be harmful, or even kill you. Over the years I have seen believers spiritually decimated by controlling leaders. These leaders are usually talented and seemingly have it all together, so they have a hard time seeing or believing the harm they cause, nor relate to the people they are supposed to leading.

These leaders are usually talented and seemingly have it all together, so they have a hard time seeing or believing the harm they cause, nor relate to the people they are supposed to leading.

In a church setting, eventually, some of them crash, since they are really operating out of fear disguised as faith, and they are insecure. Or they are brought down to a point where they cry out in prayer and can hear Gods voice, and gradually grow to become the pastoral, relational servants that they were called to be in the first place.

How did Jesus lead? He washed the disciple’s feet!

How did Jesus lead? He washed the disciple’s feet! He wants to do that through those who lead in the church even today. God does not so much need people in leadership who can get things done, as He needs shepherds for the flock.

The people may appear to follow controlling leaders, thinking they are supposed to, but underneath they resent them, and the church will have a revolving door except for the few loyal people with the faith to believe prayer can change things.

On the other hand, people will follow those who obviously love them. And it will be a more honest, loyal following who will be teachable and grow strong in the Lord, not because they are pushed to, but because they want to.

You know, in medicine, that prevention is best. It’s the same in the church. Good nutrition comes from eating reasonable amounts of gently-acting nutrients on a regular basis and drinking lots of water. Good pastors and leaders don’t force-feed their sheep, but consistently make the food of the Word of God available and applicable, and they don’t ration the water but allow the water of the Spirit to flow freely to touch the lives of the people.

If you have been hurt by a controlling leader, just remember that their way is not Gods way, so do not be condemned and resentful. Rather, forgive, see that they have a need, and pray for them. If God has planted you there, you have the grace to pray and see it through. If He has not, best move on before you become a problem yourself.

Is prophesying falsely okay or a sin?

Is prophesying falsely okay or a sin? Have you ever heard anyone use this verse to justify the idea that false prophesying is okay…