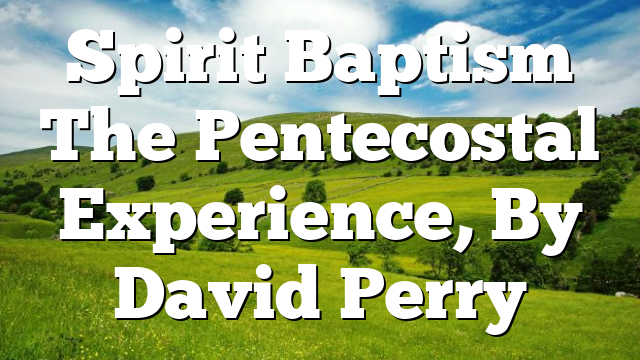 It is most appropriate that a scholarly examination of the Pentecostal experi- ence of Spirit baptism (SB) would begin with pastoral and confessional con- cerns. If SB and the attending experience of speaking in tongues are (and for some scholars this is arguable) the salient features of Pentecostalism, and if an increasing number of self-proclaimed Pentecostals do not profess to having been baptized in the Spirit, much less to having spoken in tongues, then how does the theologian account for the continued primacy of place of this doc- trine? Further, if the doctrine of initial evidence arose in a context of polemic, and if that context is no longer a dominant one, are the doctrine and polemic needed or desirable? These questions are further complicated for the theolo- gian who has indeed experienced SB in a decidedly Pentecostal way with the accompanying experience of speaking in tongues—at the age of five, no less— and for whom the experience has continued to have significance. The answers for one such scholar, David Perry (Vice-President for Academics at Alphacru- cis College in Sydney, Australia), were to be sought in his doctoral work at Australian Catholic University; his research findings are the substance of this important study. As he writes in the Preface, “What I did want was to discover for myself whether there was a theological substance to the experience of Spirit baptism, and whether this could provide a rationale for maintaining Spirit bap- tism as a focus of Pentecostalism” (x).

After a critical assessment of the work of Pentecostal scholars, it is Perry’s view that these approaches and methodologies have not moved the discus- sion sufficiently forward because they have primarily focused on exegesis and doctrinal analysis. Perry’s own critical investigation of this distinctive Pente- costal doctrine, then, begins with a search for meaning. This quest leads him to the analysis of Bernard Lonergan and his functional approach to mean- ing.

In chapter two, Perry examines religious experience and meaning, acknowl- edging the subjective nature of such an investigation. Nevertheless, he main- tains, with James K.A. Smith, that knowledge is the product of both internal and external experiences and he denies the inferiority of internal ones over and against those that are external. He also maintains, importantly, that experience precedes critical reflection and “carries elemental meaning” (72–73).Therefore, experience is valid as a source of doctrine. Experiences are, however, culturally (therefore, ecclesiastically) conditioned. Perry then explicates Lonergan’s four functions of meaning. In each of the chapters that follow, SB is examined in light of these four.

The longest chapter in the text is the one in which the cognitive meaning of SB is explored. Perry suggests that this function is important because of its relationship to truthfulness but is also the function leaving Pentecostals most open to criticism by scholars in other traditions. Though the process of cogni- tion begins with experience, it culminates in judgment. And it is those judg- ments that must be examined. An analysis of common assertions made about SBby those within the tradition leads to a discussion of three critical aspects of the doctrine: subsequence, enduement with power as purpose, and initial evi- dence. Perry boldly claims—and I would agree—“the end result is often a doc- trine that fails to capture the richness of the lived experience or to reflect the true essence of the experience” (101). Perry continues in the search for cognitive meaning by assessing sources—experience and Scripture. This involves mea- suring Pentecostal claims (in testimonies) against those of the biblical texts. In particular, he examines changes in affect as well as phenomena delineated in these testimonies. I found this to be insightful as a scholar doing similar work because the claims that he sees emerging from testimonies are similar to, but also different from, those I have examined. This analysis concludes that SB is “an experience of the Holy Spirit” and that, at least, the associated phe- nomena have resonance with scripture. As he states it, these “characteristics are what one might expect to observe when the human spirit encounters the Spirit of God” (131). Perry then moves to consider what this experience in the Spirit actually means, examining the language of “baptism,” in particular. He goes on to assert that beyond equipping for ministry, the cognitive meaning lies in the “revelational and transformational encounter with the Spirit” (147). Drawing upon Augustine and Catholic sources, Perry concludes that this expe- rience may be understood “as the procession of love, the Holy Spirit poured out into our hearts from the Father and the Son” (149).

In the next chapter, consideration is given to the effective meaning of SBfor Pentecostals. If this is an experience of the Holy Spirit, what is its effect? To assess this, Perry explores the relationship between SB and eschatology. Perry

asserts that claims that Pentecostalism simply emerged in a period of escha- tological fervor—claims such as those made by Steven J. Land and D. William Faupel—diminish the actual contributions, the effects, of the experience on those who were, and are, active participants. For Perry, SB and eschatology are mutually reinforcing theological themes. Critical to this chapter’s discussion is the shifting eschatology, and waning of eschatological fervor, within the Pente- costal tradition over time. Perry’s examination of early Pentecostal testimonies, brings him to propose (with others) that there is a prevalence of claims of affec- tive change resulting from the experience leading him to conclude that SB is a baptism of divine love. Importantly, Perry emphasizes that divine love is not disconnected from mission and social action; in fact, it provides the disposi- tional change making such possible. Empowerment, then needs to be broad- ened as a concept. In proposingan effectivemeaning forSB, Perry has suggested ways in whichSBmay find meaning for Pentecostals in a variety of contexts in the 21st century.

The third function of meaning assessed is that of constitutive meaning. How doesSBgive meaning to Pentecostal communities; how does it constitute them? Given the communal nature of Pentecostalism, and its inherent bias against individualism and tribalism, this may be one of the more important considerations of this study. He examines how this has happened historically and in ecclesiological studies, concluding as have many, that there is a real need for work in the area of Pentecostal ecclesiology. Unfortunately, this chapter is less developed and less evidence is offered for this constitutive function of SB. This is not to say that I disagree with his premise; there is just much more to be said!

Finally, communicative meaning is assessed and this, obviously, leads to a consideration of the phenomenon of speaking in tongues and how meaning is conveyed through that experience. This chapter also explores how Pente- costalism is inherently a narrative theology. These claims about communica- tive meaning are examined through case studies of various ecumenical dia- logues. Perry concludes with a suggested reworking and re-visioning of doctri- nal statements regarding SB. Clearly, this isn’t an enviable task as it is unlikely that all will be satisfied with the outcome. While I believe Perry gets at what is necessary in such a needed revision, I am left wanting, especially since his statement doesn’t account for signs as inherent to the experience. I find this curious given the attention devoted to phenomena in the rest of the book.

As I often conclude after reading new Pentecostal theological proposals, the scholars would have been well-served by readingWesley, who, of course, under- stood salvation as a journey of the grace-filled (Spirit-filled) life, inclusive of sanctification as an experience of perfect love. Early Wesleyan-Pentecostals,

such as Joseph H. King, certainly expressed an understanding of SBthat would resonate in many ways with Perry’s. That said, this valuable work has moved us much further down the road in our attempt as confessional theologians to revi- sion this hallmark experience. For us, as Perry admits, this is an ongoing task. I would add, for Pentecostal scholars it cannot be otherwise!

Jill Austin: A prophetess by providence

I still remember the night that I ended up in the house of the prophetess by providence. I believe in impartation. Do you? Phil…