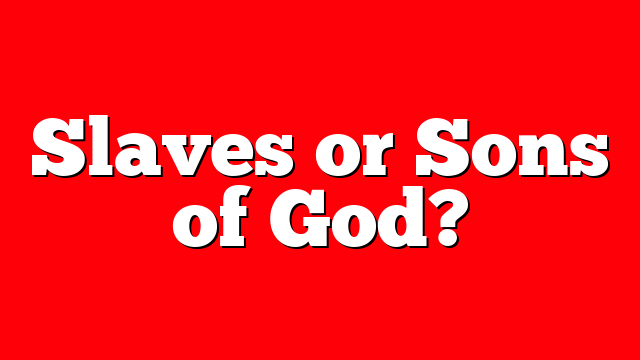 WHAT DOES IT MEAN WHEN CALLED “SLAVES OF GOD”?
Ray E Horton

So, what does it mean to be “slaves of righteousness” and “slaves of God”? After all, didn’t Jesus call us “sons of God”

So, what does it mean to be “slaves of righteousness” and “slaves of God”? After all, didn’t Jesus call us “sons of God“:

So, it is clearly established that the Lord doesn’t see us as “slaves” but rather, “sons.” We have His gift of righteousness. The idea of being a slave is more our attitude of humility, submitting to and drawing on His righteousness within, yielding to allow Him to have His way and to live in and through us.

Willing to Be His Father’s Slave

The story of the prodigal son comes to mind. It is a beautiful example of what we are discussing. When he had lost all his inheritance and was starving, he decided to go home to his father and say “…I have sinned against heaven and before you, and I am no longer worthy to be called your son. Make me like one of your hired servants” (Luke 15:18-19).

He was submitted, willing to be his father’s slave or servant. But his father didn’t see him that way. He restored him to full sonship. He celebrated the boy’s return, “for this MY SON was dead and is alive again; he was lost and is found…” (vs. 24).

We are sons of God, so let us walk in the fullness of that sonship knowing who we are in Christ and acting like it as we carry on the mission. But let us do so yielded to Him with humble hearts, letting go of our own way and saying, like Jesus taught in the Lord’s Prayer, and cried out in the garden of Gethsemane, “Your will be done.”

The Terms Demon, Unclean Spirit, and Evil Spirit in the New Testament

In the New Testament we find three separate terms that are used as complete synonyms: demons, evil spirits and unclean spirits. Some obvious examples…