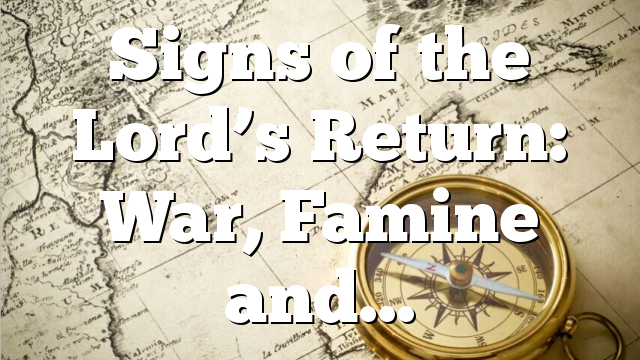 The Signs of the Lord’s Return (2): War, Famine and Earthquake Occur Frequently
🎬 https://youtu.be/K0uyh2IH72w
It says in Matthew chapter 24, verses 6 to 8: “And you shall hear of wars and rumors of wars: see that you be not troubled: for all these things must come to pass, but the end is not yet. For nation shall rise against nation, and kingdom against kingdom: and there shall be famines, and pestilences, and earthquakes, in divers places. All these are the beginning of sorrows.”
The disasters that have occurred across the world in recent years have been growing more and more severe and, to man’s horror, earthquakes, tsunamis, floods, droughts, wildfires, famine and outbreaks of disease occur frequently and are widespread; the world is in a changeable and turbulent state, and war, violent acts, regional conflicts and terrorist attacks happen frequently and continue to escalate. For example, in April 2015, 16 states in the US discovered that they had the avian flu virus, and experts indicated that this was the worst outbreak of avian flu in the US in 30 years. On April 25, 2015, an earthquake registering 8.1 on the Richter scale occurred in central Nepal, resulting in the deaths of around 9,000 people, with 22,000 injured. From November 2015 to July 2016, Paris, Brussels and then Nice experienced multiple terrorist attacks, which caused the deaths of at least 200 people, with over 700 injured. In April 2016, India experienced its worst drought for 40 years, which caused more than 300 million people to struggle to find enough water to drink. At daybreak on April 1, 2017, floods and landslides caused by heavy rain hit Mocoa, Colombia, killing at least 316 people and injuring 332, with 103 people missing. This was the third weather-related disaster in Colombia’s history and is considered the worst disaster ever to hit Mocoa. On September 28, 2018, a powerful earthquake measuring 7.5 magnitude hit Indonesia, triggering a tsunami of about 6 meters and causing the deaths of at least 2200 people, with 5000 missing. This made it the deadliest earthquake worldwide in 2018. In June 2019, heatwave seared Europe, with temperatures reaching 40C–45C in many areas, and a lot of European countries broke their all-time heat records. A meteorologist even said, “Hell is coming.” It is precisely the frequency of these disasters that serves as a reminder to mankind from God, and from them we can see that this biblical prophecy has long been fulfilled.
God’s words say: “In speaking of the last days, this refers to a separate age, one in which Jesus said you will surely encounter disaster, and encounter earthquakes, famines, and plagues, which will show that this is a new age, and is no longer the old Age of Grace” (“The Vision of God’s Work (3)” in The Word Appears in the Flesh).
“All disasters will befall one after another; all nations and all places will experience disasters—plague, famine, flood, drought and earthquakes are everywhere. These disasters do not just happen in one or two places, nor will they be over within one or two days, but instead they will extend over a greater and greater area, and the disasters will become more and more severe. During this time all manner of insect plagues will arise in succession, and the phenomenon of cannibalism will occur in all places. This is My judgment on all nations and peoples” (“Chapter 65” in The Word Appears in the Flesh).
“The time really can brook no delay. All manner of plagues will run rampant, opening their ferocious, bloody mouths to devour you all like a flood. My sons! The time has come! There is no more room for pondering. The only way out that will bring you under My protection is to come back before Me” (“Chapter 14” in The Word Appears in the Flesh).
To Be Continued …

Holiness, which is also the perfection of God is the Righteousness, love and power of God

Holiness, which is also the perfection of God is the Righteousness, love and power of God. Holiness has a structure, which is the righteousness….