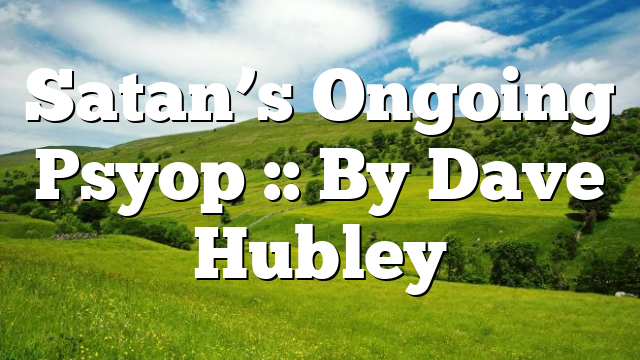 (There is a special message at the end of this article for those who might happen to read this and do not have Jesus in their life and are looking for peace and a way to better understand the present-day insanity and confusion.)

It is a condensed form of the two words: Psychological Operation. It is most commonly associated with military operations, but as we will see, it is not limited to that application.

A “psyop” is a deliberate campaign intended to deceive, confuse and misdirect. It is normally aimed at a specific, targeted audience; however: In this case, that audience is every living, breathing soul in the world (including all the deceived supporters of global governance).

It employs outright lies, half-truths, omissions and propaganda to create an atmosphere of fear, hatred and disunity: to divide and conquer.

It is and has been working quite well for centuries. I would also point out that it is increasing in its effectiveness daily.

I am not a pastor or a preacher. I have no education beyond high school and the school of hard knocks, which we have all attended on occasion. I don’t profess to fully understand how Satan and/or his minions actually execute their promulgation of this deceit and evil in the minds of humans, but it is obvious that they are succeeding in it. The increase in occult practices, Satan worship, and the general degradation of human conduct are adequate proof of that success, in my estimation.

My beloved and very solid Pastor made a point one Sunday that, I believe, could not be more accurate. He said, “Satan has a very small toolbox.” He has been using the same small assortment of “psyops” tools since Adam and Eve were deceived. They still work just as effectively today.

Let’s have a look at some of the lies that he repeatedly employs to deceive and manipulate. (This is by no means a complete list):

Perhaps you may have a different view of some of what I might say. That is not a problem as far as I am concerned; however, there can be no compromise on what God has established by His own Authority to be the requirements for Salvation and Eternal Life, which is complete trust in Jesus Christ and His death, burial and resurrection.

In Him and Him alone, God has determined to be the way, the Truth and the Life for all who will believe in Him.

Very Important: I believe that God loves all His creation without exception and holds all people equally important in His eyes. However, He is also Holy, Righteous and Perfect, and He has made clear in His Word, the Bible, that He will hold every single person individually accountable for their actions. God does not do psyops. He will do what He says, and it will be based on absolute Truth.

For the purpose of simplifying, I am establishing three general categories of people who I believe most reflect the population of the world and who represent the “primary” objects of Satan’s attention.

1) Genuine Christian Believers (Possessors): These are all who have come before the One True God under His terms and by the Truth of Jesus Christ. They possess Eternal Life and will not be condemned (John 5:24).

Satan’s hatred is most strongly focused on this group, and he will continue to attempt to put rats in our heads. He hates us because we belong to Jesus Christ. Put on your armor and stand firm. The gates of hell will not prevail against the True church (Matthew 16:18).

2) People who profess (Professors) to be Christians but have not really received Christ on God’s terms. This is the category to which Satan devotes the least amount of time.

I believe the ESV translation of God’s Word describes this best:

“For the time is coming when people will not endure sound teaching, but having itching ears they will accumulate for themselves teachers to suit their own passions” (2 Timothy 4:3).

This category contains almost as many “excuses” as category 3.

3) Unsaved People: These are, unfortunately, the vast majority of the world’s population. They are from many nations (ethnic groups, races), tribes and cultures. They may hold to many different religions or have no belief system at all. They trust in almost anything, any person (including themselves), or any ritual or religious rite except the God of the Bible.

While Satan has a very limited number of tactics that he can employ, he is far from stupid. He knows that if he were to attack Jesus directly, it would undermine his goal.

Instead, he employs subterfuge. “Now the serpent was more crafty than any beast of the field that the LORD God had made. And he said to the woman, “Did God really say, ‘You must not eat from any tree in the garden’?” (Genesis 3:1).

He knew full well what God had directed but used the same deception then that he uses today.

He also knows that it is not necessary for him to promote any particular “religion” or other “belief system” or “unbelief system” that lost people have put their faith in. He only needs to divert or deflect people (or keep them diverted or deflected) from the only One who actually is the Way, the Truth and the Life.

He also provided the one and only alternative to Satan’s psyop:

It is wonderful to point out that in all the different races and ethnic groups, there are true believers in and followers of Jesus Christ who have repented and received Salvation from God through His Son, Jesus Christ. God has made it clear that His Salvation is for ALL who will believe:

“And they sang a new song: “Worthy are You to take the scroll and open its seals, because You were slain, and by Your blood You purchased for God those from every tribe and tongue and people and nation” (Revelation 5:9). Emphasis added by me.

And now for the crux of this article.

There are many people, organizations, “churches,” etc., who claim to offer you truth. So many so that the very word “truth” starts to be a burden to your ears because you have heard it so many times, and it has ceased to mean anything or turned to bitterness in its unreality.

Nevertheless, there is and always has been only ONE version of the Truth.

Truth is reality from God’s perspective.

If you truly seek in your heart and soul to know this Truth, the only Truth, I would direct you to its Author and Finisher. The Living and Eternal Creator has made these promises to any and all who sincerely want this Truth and will seek and accept it from Him.

The above verse is from the Old Testament, but as with all God’s Word related to Salvation, it applies to all people through all ages. No exclusions. No exceptions.

This is from the New Testament:

And this, one of my very favorites from the Lord Jesus Himself in the final book of the Word of God:

“Behold, I stand at the door and knock. If anyone hears My voice and opens the door, I will come in to him and dine with him, and he with Me” Revelation 3:20). Joyfully underlined for emphasis by me.

I hope that, if you have read this far, you will seek the Truth of God yourself by directly and respectfully asking Him. I don’t know how He will answer you; it may be through a person or event. He knows the hearts of all people who earnestly seek Him.

I do know this: If you are sincere, He WILL answer you.

“The grass withers, the flower fades, But the word of our God stands forever” (Isaiah 40:8).

For anyone who may read this article and has not trusted in Jesus Christ and therefore has no hope or peace in your life:

It requires that you come before God on His terms.

And, what are His terms according to His Word?

God has made it absolutely clear that there is no one who comes before Him, under His terms, that will be refused.

If you put all your trust for salvation in Jesus, and Him only, you can follow that prayer up by simply saying, “Thank you, Father God, for hearing my prayer and saving me,” because we can trust Him to keep His Word. He always has. He always will.

John 5:24: Truly, Truly, I say to you that he who hears My words and believes the One who sent Me has eternal life and will not be condemned. He has crossed from death to life.”

There are no answers and there is no hope in the world by governments, organizations, politics or politicians. There are only lies and deception. But you can have the Truth and the peace you seek.

Understanding Your Authority in Christ

Pastor Shane Brown gives a sermon teaching from the pulpit about the authority of the believer. (Audio Only) http://www.prayerfaithministry.com Facebook Comments