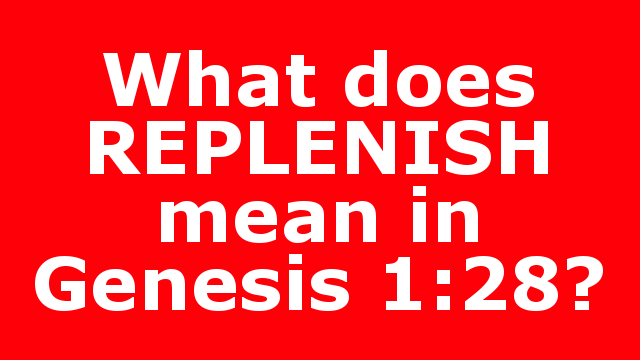 Question: Genesis 1:28 (KJV) in the King James Version (KJV) contains the expression ‘replenish the earth’. Some have used this translation to support the ‘gap theory’, also known as the ‘Ruin-Reconstruction theory’, which involves the necessity for God to re-fill the earth after a pre-Adamic race had perished as a result of a so-called ‘Lucifer’s flood’. Is this interpretation correct?

We have seen that Latin re- originally meant ‘again’ but then developed new overtones. Before the Bible was translated, repleo, the word that gave us ‘replenish’, normally meant just ‘fill’. Here are some examples from Latin authors:

There’s another English word that comes from repleo. It is ‘replete’. We can say ‘I am replete’, using a politer word than ‘full up’ with food. It doesn’t mean ‘full again’.

Now as to the Hebrew word itself: it is male’, the simple verb ‘fill’. (Strong’s concordance No. 4390.) In its various forms it occurs 306 times in the Old Testament. Only seven times does the KJV translate it as ‘replenish’, but 195 times ‘fill’, ‘filled’ or ‘full’.

THE VOICE OF JESUS

THE VOICE OF JESUS   The first perspective of the problem is the command of Christ to “make disciples.” Jesus commanded the disciples in…