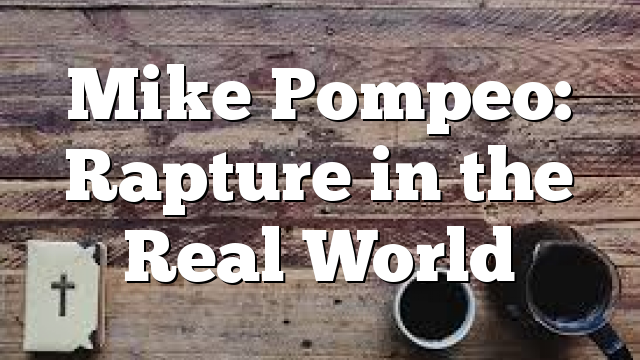 JERUSALEM — When Secretary of State Mike Pompeo sat down for an interview with the Christian Broadcasting Network in a hotel in Jerusalem earlier this month, he made a remark that was perhaps the most revelatory of any in his nearly one year in office.

Mr. Pompeo talks about the rapture. “We will continue to fight these battles,” he said at a “God and Country Rally” in 2015, because there is a “never-ending struggle” until “the rapture.” “Be part of it,” he said at the meeting, at the Summit church in Wichita, Kan. “Be in the fight.”

An evangelical Christian, Mr. Pompeo had just returned from tours of the Church of the Holy Sepulcher, built on the ground where Jesus is said to have been crucified and buried, and of tunnels beneath the Western Wall, by the holiest site in Judaism. The interviewer posed a question around a biblical tale about a queen who saved Jews from slaughter by a Persian official: Did Mr. Pompeo think President Trump had been “raised for such a time as this, just like Queen Esther, to help save the Jewish people from the Iranian menace?”

Both profess to be pro-Israel for example. Each enthusiastically backed the decision to move the US embassy from Tel Aviv to Jerusalem last year. Each also subscribes to the Christian Zionist belief that the rapture will only come once the Jews have all regrouped in the Holy Land. At which point, they, along with the rest of the unrighteous, will be smitten by a vengeful God. It’s pretty hard to argue that the embassy move advanced prospects for Arab-Israeli peace.

‘Brought to Jesus’: the evangelical grip on the Trump administration

“As a Christian, I certainly believe that’s possible,” Mr. Pompeo said. “It was remarkable — so we were down in the tunnels where we could see 3,000 years ago, and 2,000 years ago, if I have the history just right — to see the remarkable history of the faith in this place, and the work that our administration’s done, to make sure that this democracy in the Middle East, that this Jewish state, remains. I am confident that the Lord is at work here.”

Studies show that white evangelicals are much more likely than other Americans to believe that Israel fulfills a biblical prophecy. Known asChristian Zionists, they believe God promised the land to the Jews, and that the gathering of Jews in Israel is foretold in the prophecy of the rapture — the ascent of Christians into the kingdom of God. In November, Mr. Pompeo told a reporter for The New York Times Magazine that the Bible “informs everything I do.” The reporter noticed an open Bible in his office, with a Swiss Army knife marking his place at the end of the book of Queen Esther.

[Jesus told them His disciples:] “This is what is written: The Messiah will suffer and rise from the dead on the third day, and…