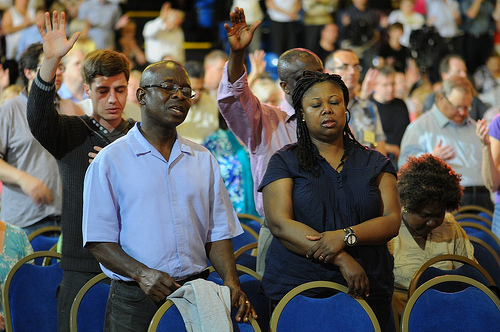 In one country I have lived in, parents would have their children write out prayers to a dead saint that the Roman Catholics venerate and tell the children of the saints powers that seemed rather magical. Some of the parents didn’t even believe that the dead saint had these powers, but convinced their children of it anyway.

Have any of you seen this? What do you think of it?

Levi Allen Goff [09/29/2015 10:02 PM]
Ofcoarse, the vindication of Mary is one of such. Catholics claim lots of wonderful things about this, even the burning of candles to receive blessings. But we know better. Truth be told, something as simple as a “Hail Mary” is drastic error.

If the Pope is claiming to step up for what seems is good so often, why doesn’t he correct this?

Link Hudson [09/29/2015 10:22 PM]
Levi Allen Goff, my mom’s memory is a bit fuzzy about it, and she doesn’t remember if this was my older who sister who said this, or some other child and she heard it, but a girl was devastated when her Christian parents told her there was no Santa Claus, and she asked,

My parents did not try to convince me or my brother about the Santa Clause stories. They told us it was ‘make believe.’

Our little children trust us. As parents, how can we tell them stories about a magic fat man and try to make them believe it with the same mouth that we tell them the holy Gospel of Jesus Christ with, and try to convince them to beleive it?

Link Hudson [09/29/2015 10:30 PM]
I little intellectual humor: At the Council of Nicea, it is said that Nicholas hit Arius in the face as he expounded is Christology. And to this day, the Jehovah’s Witness organization does not celebrate Christmas.

Link Hudson [09/29/2015 10:48 PM]
I don’t know why we’d consider Nicholas to be a bad guy if people have taken his name and mixed it with Norse Mythology and the English idea of Father Christmas to create a legend. It’s not his fault.

Levi Allen Goff [09/29/2015 11:01 PM]
I just finished reading on him. He seems like a solid figure that instead of being revered as a Man of God that was turned into a religious relic, literally…

Link Hudson [09/29/2015 11:05 PM]
Levi Allen Goff, I read a story that he was on a boat to Mysia and that there was a storm, and that he went on storm and either prayed or did something like ‘peace be still’ and the storm stopped. Then he went to Mysia, where the bishop had died, and asked where the church met and walked in, after the elders had received a prophecy or word of knowledge that the next man to walk in was to be the next bishop. He was supposed to have been rich and given away his fortune by doing such things as throwing money into poor family’s homes who otherwise would have been tempted to sell their daughters into slavery because they did not have money for dowries, and that the money once fell in a sock drying by the fire.

He also negotiated a lower tax rate with the emporer for Mysia, so he was well loved for that.

I believe after reading about him that his faith was indeed backed by his works. A trait I consider to be the mark of a true Christian, or faithful follower of Christ.

Levi Allen Goff [09/29/2015 11:24 PM]
I had to lookup Orthodoxy. I understand it is an element that built up the Church. So, as to explain its meaning, why is it important in our faith today?

Candace Laughinghouse [09/30/2015 12:52 AM]
The oldest book was found in the Ethiopian Coptic church. That’s as orthodox as you can get. I know how people tend to forget Africa is the birthplace of much of christianity. The idea of reverencing the ancestors is not demonic.

John Kissinger [09/30/2015 12:54 AM]
#WHATEVER [not to say something stronger for the language of all your posts here being not only misleading but strongly misguided]

Timothy Carter [09/30/2015 1:29 AM]
Lies it is lies lies lies just like Santa Claus. We should never teach our children to believe in Santa Claus. Just as we should not teach our children to believe in Peter Pan.I Papa Smurf did not die on the cross for them. We should not get their hopes up that Harry Potter is going to return in the clouds and take them out of this world and to the home called heaven. We should not let them believe that My Little Pony can actually fly around or the Care Bears can come to their rescue. You read this and you think old Timothy you’re being silly. I am NOT being silly. the moment you tell your child that Santa Claus is real or you allow them to watch a movie on television that says Santa Claus is real without you correcting them and explaining to them that Santa Claus is a lie from this culture. He is just a figment of someone’s imagination they lie to deceive people to get the attention off of Jesus Christ then you are telling them that everybody’s imagination is more important than Jesus Christ. and that is part of why the world is in the shape it is today why almost everybody in the Millennium age group struggles with their identity crisis and wonders ‘why everyone doesn’t buy into my imagination because I am right.’ we need to start lifting Christ up in our families.Period .

Link Hudson [09/30/2015 1:30 AM]
Clearly, this culture of Americans teaching kids about Santa Claus goes back to veneration of St. Nicholas. Dutch Catholics promoted it in New York. Some ‘Orthodox’ groups write prayers to saints.

It’s easy to be against Christians in some other country have synchretistic practices, but not in our country.

John Kissinger [09/30/2015 1:35 PM]
provocative post as usual by the OP – I do not know a single Pentecostal praying to saints. If you are in a church where they worship Santa instead of Jesus – get out of there and find a good church today…

Link Hudson [09/30/2015 4:21 PM]
John Kissinger If they do it it is at home. I’m not sure where you live. In the US, a lot of parents convince their children that Santa, otherwise known as St. Nicholas, rides in a magic sled pulled by magic reindeer, and brings their Christmas presents into the house and puts them under the Christmas tree. Santa is presented as having near omniscience. “He knows when you are sleeping.” In schools and other venues, children will sing songs about Santa and not Jesus at Christmas time.

Peyton Gurley [09/30/2015 5:18 PM]
I don’t believe orthodoxy has any bearing on God’s Word. It’s just a way for people to back up their heretical teachings. If orthodoxy mattered, we should all be Catholic.

The Current Push For Gold Is in the Bible Too!

by Jason Conley There is a growing concern about the future collapse of currency that potentially could happen at any moment. World banks across…