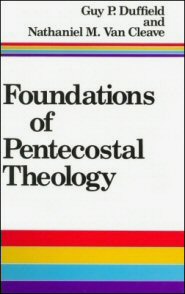 Not sure what some of the posts here have to do with Pentecostal theology. Too important a title for a group to be used for unrelated issues, in my opinion.

Ricky Grimsley [02/24/2016 7:40 PM]
Please bless us with a great hypothesis to discuss. I havent seen your name before. Must have missed them in the 400 comment discussion on open-theism.

John Conger [02/24/2016 8:33 PM]
I’ve heard several people say that. My question is “what does that mean”? Lets just reiterate over and over what the mainstream chriches teach? Never question or bring up scriptural problems with traditions and long held views?

So, what then do you consider to be exclusively Pentecostal Theology within the Bible?

And, what, if anything, outside of the Bible do you feel is Pentecostal Theology?

And, what parts of the Bible do you consider not to be Pentecostal Theology?

Charles Page [02/26/2016 4:36 PM]
Actually any Christian theological discussion not from a Pentecostal context has departed from the Biblical base.

Terry Wiles [02/28/2016 5:15 PM]
Classical Pentecostals were never interested in ecumenical dialogues. They were interested in preaching the gospel with the unction and power of the Holy Spirit.

That was true first century and 20th century.

Rickey Matthews [02/29/2016 8:50 AM]
Hey everyone i would like to talk about acts 2:38 i think everone knows what it says about going to heaven. Christopher,alan,ricky,john,tom,
Wolfgang,enoch,brent,jesse,charles,jim,and at lease terry wiles, get deep with the word please O please thanks

Karen Lucas [03/01/2016 10:09 PM]
Terry Wiles, I can speak for the classical pentecostal leaders who started the International Pentecostal Holiness Church and say that there were certainly well educated men among them from various christian traditions who also enjoyed preaching under the unction and power of the Holy Spirit. In addition to preaching, they spent the majority of their years focussing on, writing about and teaching doctrine – G.F. Taylor wrote the first defense of Azusa Theology and was educated at UNC Chapel Hill. J. H. King was seminary educated. The writings of B. H. Irwin prove he was very well read in Christian Theology. A.B. Crumpled was also very intelligent and made a good effort to unite quite a few denominations, Quakers included. The Holiness tradition is, by definition, ecumenical. The original goal was to create a safe place for subscribers to holiness (from across the spectrum of the christian faith) to safely meet and worship God as they chose. They were, from the beginning, working towards unity.

My earlier point was simply that classical Pentecostals fully unified behind pursuing the lost that Jesus came to save and the unction or power to do that which comes from the One who baptized them in the Holy Spirit in such a way that they were endued (clothed) with the power from on high.

We know not why good people have to die

We know not why good people have to die, but we do know we must tell their story… #ourCOG