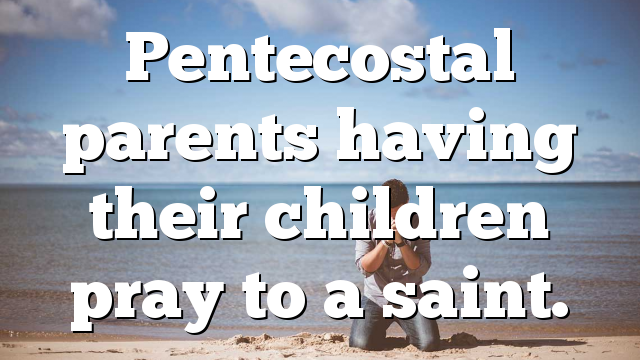 Pentecostal parents having their children pray to a saint?

It is a common practice for children in the United States to write letters to a deceased saint and ask him for presents. The saint is St. Nicholas. Why are Protestants against praying to saints, but allow their children to do so? Do you know of any Pentecostals who have their kids write letters to St. Nicholas?

What about Pentecostals lying to their children, telling them that a magic fat man flies around the world in a sleigh pulled by reindeer, visits every house comes down the chimney and leaves gifts for all the children in the world and eats the cookies they leave for him? With the same mouth, they tell their children about a Man who fed 5000 men, not counting women with children, with five loaves and two fish, who healed the sick, died on a cross and rose from the dead.

There was a little girl whose parents went to a Pentecostal church. Like many other parents, they had lied to their daughter about Santa Claus. Finally, they told her that Santa Claus was ‘make believe.’ The little girl cried and said, “Is Jesus real?”

That shook my mother. She had told my older sister the lie about Santa, but not me or my younger brother. I cannot remember my mother ever lying to me. I still had a good time even though I knew Santa Claus was just ‘make believe’ like MIckie Mouse and Aquaman.

Doesn’t lying to children about Santa Claus, the Easter Bunny, and a spirit from pagan mythology (fairy) who takes their teeth undermine a parent’s credibility when it comes to teeaching children the word of God.

Can we get every church to start praying for these men?

Can we get every church to start praying for these men? Everyone share this. How to stop ISIS??? Pray. Here is a list of…