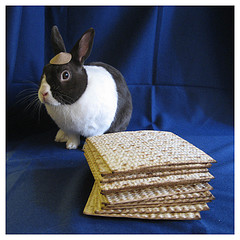 Reprinted with permission of the Jewish Theological Seminary.

The frequent overlapping of Easter and Passover–of the Christian Holy Week with our eight-day celebration of Passover–merits attention. Unlike the yoking of Christmas and Hanukkah, Easter and Passover are festivals of equal gravity. Side by side they bring to light the deep structures of both religions.

Destined to Coincide First, their inviolable matrix is spring. In each case, the calendar is adjusted to ensure that the holiday is celebrated early in the spring. For the church, which believed that the resurrection took place on a Sunday, the First Council of Nicaea in 325 determined that Easter should always fall on the first Sunday after the first full moon following the vernal equinox. In consequence, Easter remained without a fixed date but proximate to the full moon, which coincided with the start of Passover on the 15th of Nissan.

easter and passoverBy the same token, the rabbis understood the verse “You go free on this day, in the month of Aviv” (Exodus 13:4) to restrict Passover to early spring–that is in a transitional month when the winter rains end and the weather turns mild. The word “Aviv” actually means fresh ears of barley.

Moreover, since the Torah had stipulated that the month in which the exodus from Egypt occurred should mark the start of a new year (Exodus 12:2), the end of the prior year was subject to periodic extension in order to keep the Jewish lunar calendar in sync with the solar year. Thus, if the barley in the fields or the fruit on the trees had not ripened sufficiently for bringing the omer [the first barley sheaf, which was donated to the Temple] or the first fruits to the Temple, the arrival of Passover could be delayed by declaring a leap year and doubling the final month of Adar (Tosefta Sanhedrin 2:2). In short, Easter and Passover were destined to coincide time and again.