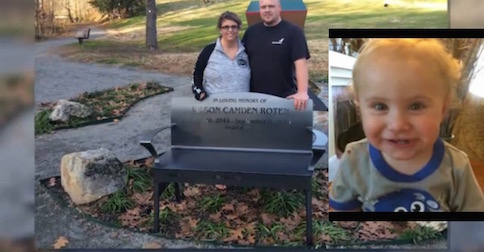 In Elkin, North Carolina, a bench honoring the memory of a 16-month-old boy who died in a hit-and-run car accident was removed from a municipal park because a bible verse and two crosses were engraved on it.

On Saturday, Heather Roten, whose toddler son Mason died on September 6 when a black Chevy Impala pushed her husband Stewart Roten’s car off the road and into a tree, which fell, crushing Mason, was tearful as the bench was installed by alumni from Elkin High School.

The bench, which the alumni made, sat near the playground at Elkin Municipal Park where Mason and his brother used to play every week, Roten recalled, adding, “They had a blast down here… He was just a joyful little boy.”

But after the bench was removed Monday, Roten was shocked, saying sadly, “One day we come down here with this beautiful bench and tears of joy and now it’s being taken away as if we haven’t been through enough already. I just could not believe that they would take something away from my precious little baby like that.”

Ben Whitecross, an Elkin High alumnus who knew the Roten family, asserted that he obtained permission from the town’s parks and recreation director, Adam McComb. Whitecross said that he was told the bible verse and crosses were the ostensible reason for the bench’s removal.

Chris Leupold, Mason’s grandfather, said, “We were just overwhelmed that somebody would memorialize our little baby. Then to have something like this happen, it’s just devastating.”

In Elkin we have an approval process for any bench to be added to our municipal park that is for a public memorial. This bench was added last Saturday without prior knowledge or approval. It was also installed on top of another memorial in the park. The bench was first noticed on Monday morning and was removed due to not being first approved by our recreation and parks director. The bench does have religious symbols and scripture in its design which no other bench in our park currently has. It is a beautiful bench and we are currently working to find another more suitable location for the bench which is in memory of a young child. Our Town Board will be discussing the matter at its next meeting to be held on December 14th. at 7 pm.

Whitecross was furious, charging, “They’re pretty much calling us liars, that they didn’t get permission, which they did. That bench should be there in his honor.” The Most Common Reason for Sickness

Join Sid Roth and Jim Richards as they discuss the #1 most common reason for sickness. Many people have been healed when they take…