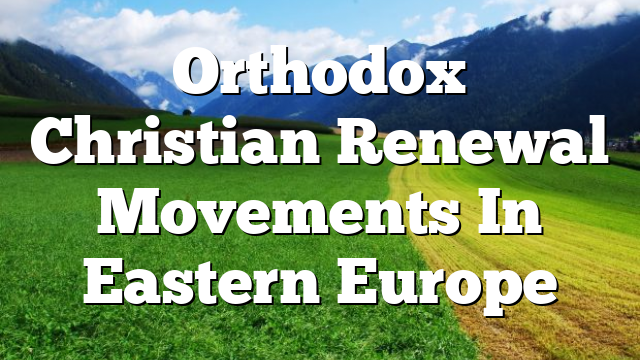 Over the last several years what was once identified in the “Christian” academy as Pentecostal-Charismatic studies has broadened to be more inclusive of reli- gious groups that don’t quite fit into those categories.This collection of essays is a volume in the series CHARIS—Christianity and Renewal—Interdisciplinary Studies. Senior editors Wolfgang Vondey of the University of Birmingham (UK) and Amos Yong of Fuller Theological Seminary (USA), adopt the more com- prehensive identification of Renewal Studies in order to include, “… a range of Christian ecumenical and religious traditions to explore issues at the inter- section of Pentecostal, charismatic, and other renewal movements and related phenomena, including: the transforming work of the Holy Spirit in Chris- tian traditions, cultures, and creation; the traditions, beliefs, interpretations of sacred texts, and scholarship, of the renewal movements; the religious life, including the spirituality, ethics, history, and liturgical and other practices” (ii).

Edited by Aleksandra Djurić Milovanović and Radmila Radić from the Uni- versity of Belgrade, these two scholars also co-authored the introductory chap- ter defining the term Renewal Movements, especially as they uniquely impact and intertwine with Eastern Orthodox Christian life in Eastern Europe. The book’s Introduction deftly lays out the purpose of the volume and is clear in identifying those characteristics shared by a majority of these renewal move- ments. The common threads include, “intensity of personal religious experi- ence, holiness, discipline, communion, Scriptural authority, the use of the ver- nacular languages in liturgical practice, hymn chanting, prayer and the revival of pilgrimages and monasticism” (12). This work brings to the English-speaking world information about certain sects and movements that have never before been known in the West. For that alone this volume is deeply welcomed.

A wide diversity of religious groups is treated in this volume. From the Old Believers, a 17th century Russian Orthodox schismatic sect to the Zoe Brotherhood, born in 20th century Greece, several of the movements were unabashedly anti-establishment in their attitudes, both towards the official Orthodox Church and the State. Others, however, sought to remain within the Orthodox Church and work for reform by serving as examples of committed piety and practicing their spirituality in their daily lives. Attitudes of the Ortho- dox hierarchy towards these movements were by no means uniform. Some bishops sought to harness the zeal and fervor of the members for the bene- fit of the entire Church, while at the same time discourage them from adopting heretical beliefs and practices that were contrary to Orthodox tradition and

Divided into three sections, Part I, contains four chapters, and addresses renewal movements in Imperial Russia, the Soviet Union and Ukraine. The Old Believers schism is introduced and the Orthodox Church’s attempts to squash the movement and it’s Endenoverie program to reunite the Old Believers to the official Church.

Somewhat problematic to the theme of spiritual renewal in the Orthodox Church, is the inclusion of sects that were judged as heretical by the Russian Orthodox Church and would have not been viewed in any way as legitimate “spiritual renewal movements”. The Doukabhors believed that their leaders were incarnations of Jesus or of the Holy Spirit. The Maliovantsy, named for their founder, Kondrat Maliovannyi, worshipped him as “the Incarnation of the Word of God, who gave them spiritual life and served as the Living Book of the New Testament.” They acted in ways that would later characterize Pen- tecostalism, i.e., dancing, jumping, shaking, quaking, rolling on the ground and glossolalia.

Part II of the volume presents, in my opinion, the most fascinating of all the renewal movements covered; the Nazarenes, not to be confused with the Wesleyan-Holiness denomination in the United States or the God Worshippers of Serbia. Initially, in the mind of the Serbian Orthodox Church there was no difference between the sect of the Nazarenes and the God Worshippers. How- ever, over the years it became clear that these two sects were quite different from each other. The Nazarenes traced their founding to 18th and 19th century German Pietists who had settled in southern Russia and were decidedly anti- Orthodox in their beliefs. The God Worshippers however, were participating members of the Orthodox Church and did not reject its teachings or practices, rather, they sought to be an evangelical movement within the Serbian Ortho- dox Church. This was seen in their continued attendance at the Divine Liturgy, their gathering at Orthodox shrines and in Orthodox Churches and practice of traditional Orthodox spirituality. Different than mainstream Russian Ortho- dox laity, they gathered after Divine Liturgy, read and studied the Scriptures, sang hymns and prayed prayers they had composed. Their worship services were more emotional in character then regular Orthodox observance. They wept while praying and were especially well known for their prayer chanting of liturgical hymns from Orthodox Church services, and for their hundreds of self-composed hymns and spiritual songs. While not precise in their dogmatic content, the hymns of God Worshippers were melodic and simple and there- fore easy to memorize

The God Worshippers elicited distrust among the hierarchs of the Serbian Orthodox Church. They would have been thrust out of the Church if it were

not for the stalwart support of well-respected Bishop Nikolai Velimirović. (The last years of Velimirović’s life were spent in the United States. For several years he taught Dogmatic Theology at St. Tikhon’s Orthodox Theological Seminary in South Canaan, Pennsylvania, and resided there until his death in 1956.) Velimirović encouraged them to organize into a single association, with a head- quarters and offices to train their members to do missionary work and instruct lay preachers. Between the wars at least 500 “brotherhood” cells existed with some 100,000 members.

Like the Lord’s Army the Zoe Brotherhood of Theologians grew from within the Orthodox Church of Greece. Founded in 1907 by Archimandrite Eusebius Matthopoulos, the Zoe Movement from its inception grew out of a deep devo- tion to the life and spirituality of the Church. The catalyst for its birth grew out of the turbulent 19th century, when Greece, for some 400 years, was under the oppressive rule of the Muslim Turks. Thousands of Orthodox Christians perished for their faith during Ottoman rule and the practice of the Ortho- dox Christian Faith was confined to the home and Church buildings and few of the priests were theologically educated. After the overthrow of the Turks by the Greek people, the Church was in great need of spiritual renewal. The need for renewal was exacerbated by the rapidly changing relationship between the Church and Greek State, the public perception of the Orthodox Church as being weak, lukewarm and ineffective in its convictions and inability to strengthen Greek identity and culture. This provided the fertile soil for the creation of a para-ecclesiastical organization like Zoe. The result was that Greek language, Greek culture and Greek identity became synonymous with the Orthodox Church in Greece.

The raison d’etre of the Zoe Movement was twofold in nature; first, “the spiritual growth of its members according to the principles of Orthodox spiritu- ality” and second, “complete dedication to the expansion of Orthodoxy within Greece …” These goals were accomplished through a vigorous program of edu- cation in which sermons and lecture, of both a spiritual and scientific nature were delivered, Sunday School were organized in parishes and villages, public reading libraries were established where religious and cultural books, pam- phlets and periodicals were made available. Likewise, charitable works were established, and Zoe worked with other existing organizations in order to pro- vide for the material needs of the public.

In its initial years Zoe was accused of being “Protestant”, especially in regard to its call for a stern moral code among its membership and neglect of detailed dogmatic theological education. Being condemned by a well-known and respected Orthodox lay theologian, an archimandrite and a bishop, led to the Synod of Bishops investigating of the Movement.The Synod not only dismissed the charges but embraced the Zoe Movement and endorsed its work. The Zoe Movement can be credited with motivating the Orthodox Church to undertake foreign missionary work in the 20th century, unheard of previously.

The Zoe Movement’s influence on the Orthodox Church in Greece, and around the world, cannot be underestimated. Numerous Greek Orthodox teachers, preachers, lay theologians, bishops, priests and government leaders have been impacted by Zoe. The present Orthodox Patriarch of Constantino- ple, Bartholomew (Archontonis), the head of the Orthodox Church in Albania, Anastasios (Yannoulatos) and the ruling Archbishop of the Greek Orthodox Archdiocese of America, Demetrios (Trakatellis), were all members of Zoe in their youth.

While the Zoe Movement continues in Greece, its strength and influence has abated. It has failed to positively adapt to the growth of Western culture in Greece. Because of its conservative nature it finds itself at odds with the present liberal government of Greece. Nonetheless, it continues to publish periodicals, organize local Bible study societies and train lay preachers and teachers, with the blessing of the official Church.

This volume is a must for those who have an interest in what “spiritual renewal” looks like in an Eastern Orthodox context. It is my hope that it is only the first of many other similar studies that will be made available to the English- speaking world.

BY GRACE YE ARE SAVED