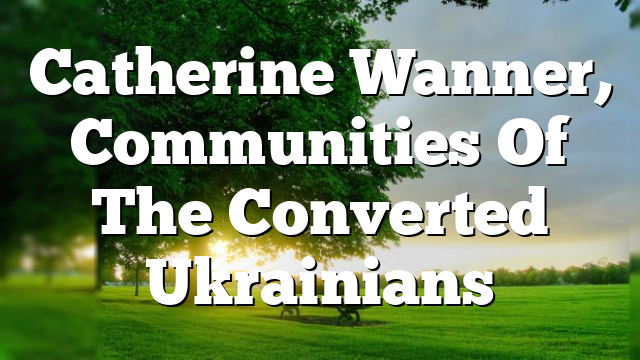 Te former Soviet Union was once thought to be militantly atheist, but even before its col- lapse in 1991, the Soviet Republic of the Ukraine had the most Pentecostals and Baptists in Europe and the most evangelical Protestants. A religious renaissance has been taking place in the Ukraine since the 1950s, often obscured in the West because of confusion about the distinction between “Russia” and the “Soviet Union” that included such diverse and far- ﬂung republics as Ukraine and Uzbekistan. Te religious renaissance, which included the remarkable revival of Orthodoxy, accelerated during the 1990s with the onset of religious freedom. But Ukraine has also always been the most Christian part of the Soviet Union. Not only has it been the most evangelical country in Europe, but for many years before the fall of the Soviet Union and ever since, it has been the most missionizing. Ukrainian mis- sionaries today return by their hundreds to their former haunts in far-ﬂung parts of Russia and Central Asia, and have also become missionaries in the transnational sense of moving from East to West and the reverse. Te Ukraine with its large evangelical population has become a centre for missionary and seminary training and publishing, with signiﬁcant assistance from the West. Western evangelicals in general and American Pentecostal and Charismatic groups in particular now see Ukraine as the most suitable base to launch new evangelistic initiatives into the former Soviet Union. Tese are all themes covered in this intriguing study, although more attention may need to be given to the tensions created by the new forms of Christianity with Eastern European nationalism and with the Orthodox churches. Westerners are fascinated with the phenomenon of the Nigerian pastor (Sunday Adelaja) with the largest congregation in Europe, but usually understand little of the con- text that made this at all possible.

Tis is why anthropologist and historian Catherine Wanner’s multidisciplinary book is so important for scholars of global Pentecostalism. Tis study is carefully constructed to take account of the social and historical context of the Ukraine, not only in discussing Ukrainian evangelicals themselves, but also in helping the reader understand the central role played by evangelism in their communities. Te book is divided into three parts. Among other things, the ﬁrst part of this book titled “Soviet Evangelicals” provides what is arguably the most comprehensive socio-historical account of Soviet Pentecostalism in the English language, even though this was not the author’s primary intention. Te pioneer of Pentecostalism in the Soviet Union, Ivan Voronaev, operated from the Ukraine, his main support base, until he was imprisoned in 1930 and is thought to have died in a Siberian labour camp in 1937. Baptist and Pentecostal organizations were forced together under the repressive Soviet regimes, but both groups were extremely conservative and rigid. Te inter- dependence that was formalized with the government-registered All-Union Council of Evangelical Christians-Baptists (AUCECB) in 1944 was an uneasy one. Te regimes under Stalin (1922-53) and Khrushchev (1953-64) sought to eliminate religion and imprisoned and executed its leaders. Most Pentecostals went underground, but the AUCECB joined the World Council of Churches in 1962 and gained an international and ecumenical voice. Under Brezhnev (1964-82) restrictions on religion were signiﬁcantly relaxed. Te ways in which secularization and the urge for Ukrainian evangelization have intersected and

confronted each other is vividly displayed through personal stories of those who lived through these turbulent times. Based on personal interviews, Wanner’s portrayal of life for evangelical and Pentecostal believers under the diﬀerent Soviet regimes is both compelling reading and at times harrowing. Her historical narrative is replete with detailed case studies based on personal interviews, not only in the Ukraine itself during six years of ﬁeld work but also among Ukrainian migrants to the United States.

Te second part of the book, “Missionizing and Movement,” takes the account into the most recent history of the Ukraine and from the perspective of Evangelical and Pentecostal Ukrainians in the United States. Emigration to North America of Ukrainian Protestants increased rapidly after 1987 when Gorbachev announced that victims of religious persecu- tion were free to emigrate and many thousands took advantage of the oﬀer. Te role of migration, travel, and the movement of Ukrainian evangelicals forms a prominent part of this study and illustrates the wider dynamics of globalization. Equally interesting is the discussion of the obvious role of these evangelicals in social and national transformation in Ukraine. Te personal case histories or “testimonies” are sometimes moving, such as the case of the man from far eastern Siberia from a shamanistic background who became a Pentecostal and was studying at a Bible college in the Ukraine in order to return as a pastor and evangelist to his own people. Te author has successfully woven micro-narratives of conversion like this into the macro social and political events of the time.

Te third part of the book, “A World without End” is a ﬁne contemporary ethnographic study dealing with evangelical Christianity in the former capital Kharkiv near the eastern border with Russia by proﬁling two Baptist and two Pentecostal churches in this city. Te tensions between the old conservative churches and the new churches inﬂuenced by global- izing forces are illustrated here. Te last chapter proﬁles in some detail the socio-political impact of the Embassy of the Blessed Kingdom of God for All Nations (the Embassy of God), the mega-church in Kyiv founded by Sunday Adelaja in 1994, an amazing phenom- enon that has planted churches all over the former Soviet Union and much further abroad, including in the “10/40 Window.” Te author describes the participation of these evan- gelicals and Pentecostals in the Orange Revolution of 2004 that brought Viktor Yush- chenko to power, and the role of the Pentecostal mayor of the Ukrainian capital Kyiv (Kiev), L. M. Chernovet’skyi, a member of the Embassy of God. In all, this most illuminat- ing study is essential reading for anyone interested in issues of globalization, social involve- ment and Pentecostalism in Eastern Europe.

We have urgent need of 50 Bibles in Pakistan, please help us to change someone’s life [kbashir.org} Facebook Comments