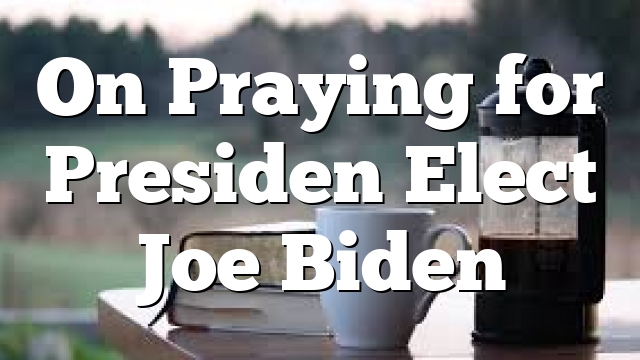 First of all, then, I urge that requests, prayers, intercession, and thanksgiving be made in behalf of all people, for kings and all who are in authority, so that we may lead a tranquil and quiet life in all godliness and dignity. This is good and acceptable in the sight of God our Savior, (1 Tim 2:1-3) (NASB)

Many evangelical/charismatic Christians have been deeply disappointed by the election of Vice President Joe Biden. Many hold to various     theories on how President Trump was cheated out of his victory. I don’t hold to that view and have written against it. But now I wish to discuss how even passionate Trump followers may be able to pray for Biden with a good conscience. First of course, we are commanded by scripture to pray for our governing officials (above).  In the context of Roman and Judean governors Paul was talking about, these governors were not necessarily nice, often quite cruel, and at times came to their positions via assassinations and other nefarious means. Still, he commanded Christian to pray for them and their success so that Christians could live in peace.

Admittedly, this is difficult to do when the President is someone we dislike or mistrust. I recall a conversation with a fellow Christian while Obama was president. He steadfastly refused to pray for him or the success of his administration. I suggested that he pray for his wisdom, but it not be recognized until after he died. He would not even do that. Political passions can make biblical obedience tough.

But now that the electoral college has voted and Biden is the legal president-elect, there are certain things most Christian can agree in praying for him.

I now pray for Biden every night as if I were right in front of him, in faith laying my hands on his head and asking for excellent health for him and a brain regenerated and free of any form of dementia. I also pray for his heart. (I am 77 now and pray that for myself so I can continue as Christian historian and writer).

Jill Austin: A prophetess by providence

I still remember the night that I ended up in the house of the prophetess by providence. I believe in impartation. Do you? Phil…