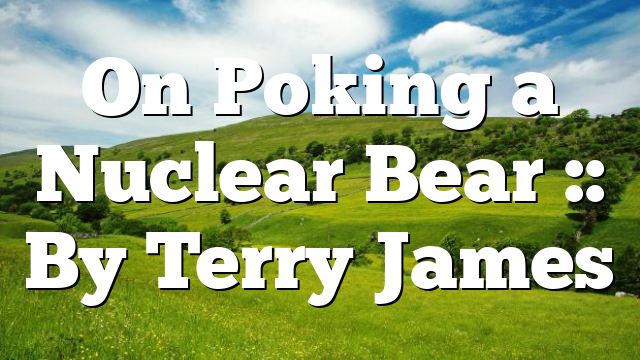 For those believers who understand that the PreTrib view of eschatology (study of end things) is truth presented by God’s word, seeing movement toward initiation of World War III should be especially pertinent. Not only is evidence of such movement front and center at the moment, but astoundingly dramatic movement it indeed is, by my way of analysis, at least.

The prophetic heart of the matters involved revolves around the Gog-Magog prophecy of Ezekiel, chapters 38 and 39.

We have looked at Gog-Magog numerous times from most every angle. And many top prophecy ministries have done the same. So, it isn’t necessary, I sense, to delve again here into the nuts and bolts of Ezekiel’s greatly detailed foretelling of that assault that will come against God’s chosen nation, Israel. Rather, let’s take a look at the most recent developments that, collectively, almost certainly are precursor issues that seem to be late-date stage-setting for that devastating invasion.

One of those prophesied events, I believe, might even precede the Rapture of the church. But I think it not likely. That is the foretold destruction of Damascus, Syria.

“The burden of Damascus. Behold, Damascus is taken away from being a city, and it shall be a ruinous heap” (Isa 17:1).

The other prophecy that most PreTrib students believe is probably next for fulfillment on God’s prophetic timeline is the Gog-Magog attack on Israel found in Ezekiel chapters 38-39.

What I hope we will look at with intention to gain insight is the reality that the Gog-Magog primary actors are in the headlines each and every news cycle. The nation prophetically scheduled, according to God’s Word, to bring Ezekiel 38-39 to fulfillment – the nation Rosh (Russia), has been dominating the news for some time now. Not only has it been dominating the news, but it is at present feared to at any moment bring man’s worst nightmare to fruition. Russia and its nuclear capability – either ranked 1 or 2 so far as numbers of stockpiled nuclear weapons — is positioned to initiate World War III at any moment.

This is the nation, according to most who study the Ezekiel 38-39 prophecy, that will lead the coalition over the mountains of Israel to take great spoil, as the scripture says.

Russia has, at present, as its leader, a man that fits the profile of Ezekiel’s description of Gog. Gog, as we have seen, is the demon spirit from the abyss that will indwell an end times leader of Rosh.

Therefore, with these facts in mind, it is more than prudent to look at the man Vladimir Putin, president of Russia. It is important to think on the profound threats and other relevant statements surrounding Mr. Putin and his actions of late while his forces zero in on his objective – taking over at least part of Ukraine.

Whether Putin is, in fact, the one who will become Gog is beyond our knowing for certain. But he, as stated before, seems to fit the profile Ezekiel provided for us to consider. And issues and events surrounding Russia and this leader point to dangers that portend perhaps war that could engulf the world in nuclear holocaust.

Russia, as configured as the Soviet Union, was often characterized as a bear. Soviet dictator Leonid Brezhnev, as some will remember, seemed to personify that bear, so intimidating was his appearance with the bushy eyebrows and his frowning, hulking figure.

The Russian bear still, I think, is a proper caricature of present-day Russia. And this American presidential administration – and the military-industrial complex controlled by the globalist powers that be are poking that bear. It is as if they are wanting Vladimir Putin to unleash the bear’s destructive power from its nuclear cave.

Although a smaller figure of a man and not as physically intimidating as Brezhnev, Putin nonetheless is possessor of a nuclear arsenal more powerful than his Soviet predecessor commanded. And it is the Putin version of the bear that is being gouged in ways not done in any era of the cold war.

There are so many examples of this poking going on that there isn’t room to begin writing them here. So, I will just give the most recent as of this writing. It is a profound indicator of the globalist war mongers’ trying to goad, thus provoke an “evil thought” from the Russian bear.

Former White House national security adviser John Bolton is now taking to the networks to call for Russian President Vladimir Putin’s assassination. “I think we should make it clear publicly so that not just Putin but that all the top Russian leadership… that if Putin authorizes the use of a nuclear weapon, he’s signing his own suicide note,” the well-known neocon hawk said to CBS in a Friday appearance.

Describing that Putin is head of command and control for all Russian – including nuclear – forces, Bolton continued by stating what he says should be official US policy: “He’s a legitimate military target… he needs to know that he’s on our target list at this point.” Bolton essentially called for the US to assassinate the Russian leader if the opportunity ever arises. Bolton went on the discuss an op-ed he penned days prior in the online military journal 1945, wherein effecting regime change in Russia was the focus.

“There is no long-term prospect for peace and security in Europe without regime change in Russia. Russians are already discussing it, quietly, for obvious reasons. For the United States and others pretending that the issue is not before will do far more harm than good,” Bolton spelled out in that op-ed. (Watch: John Bolton Calls for Putin Assassination, Regime Change, by Tyler Durden, ZeroHedge)

Why the insanity – to call for an already angry bear’s assassination? Many observers of the globalists –like those within the World Economic Forum (WEF) – believe the new world order minions are willing to bring on nuclear conflict and World War III in order to accomplish the Great Reset those such as Karl Schwab and George Soros desire.

Other than that explanation, one can properly conclude that it’s all part of the reprobate mindset of Romans 1:28. It is because of the Ephesians 6:12 human minions’ turning of their collective back on God. They are sin-infected with satanic insanity.

All this said, the Russian bear and his hordes, as foretold in Ezekiel 38-39, will have the hooks in the jaws only when God does the hooking.

Before that time, when the nukes, I believe, will be unleashed, Jesus Christ will Call His Bride to Himself. That very day of Rapture, Jesus said Judgment will begin to fall like it did on the wickedness and evil of Sodom and Gomorrah of Lot’s day (Luke 17:28-30).

Don’t be left on this Judgment-appointed earth when God’s Wrath must do its Righteously destructive work. Here is how to avoid that time of Tribulation.

The post On Poking a Nuclear Bear :: By Terry James appeared first on Rapture Ready.

Protestant vs Catholic Theological Debate on Spiritual Gifts and Healing

Here’s a post that may be of interest to some of the Pentecostal charismatics among us. Incidentally, anyone here is welcome to join this…