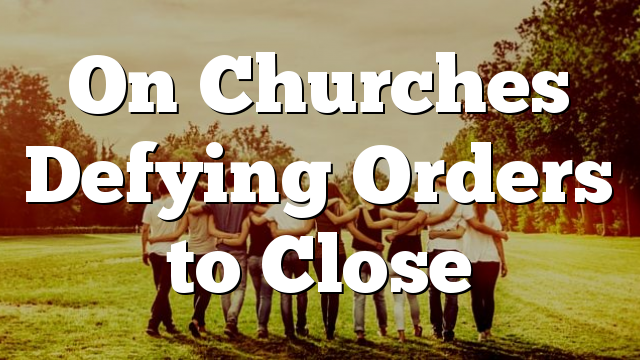 I have been asked by several person to comment on the issue raging among many Christian, that of church attendance during the covid-19 lockdowns. The controversy came to a head with the arrest of Pastor Rodney Howard Brown for his defiance of his local sheriff’s request that he not hold his usual Sunday services.

As a historian of revival, some believe I should have a definite word on this, but the only thing that comes to me is that the issue is ambiguous, and good Christians could go either way. Yes, governments have the responsibility and power during pandemics to take quarantine measures. Such measures are lawful and should be obeyed by Christians. And yes, on the other hand, in this country we are blessed with the 1st Amendment that ensures freedom of worship.

This leaves an area of ambiguity of moral choice, i.e., to disobey a law and affirm a spiritual obligation or not. As Americans learned in the Civil Rights era, for instance, defying laws excluding African American from white only restaurants was a spiritual imperative, but unlawful act. Is the restriction of attending church in the same category? I am not convinced, but for some it may be.

Many Christian don’t like having moral ambiguity in their lives. They would prefer something like the Old Testament law to guide every dilemmas presented to them. But the New Testament allows large areas of ambiguity in many of life’ issues. Paul is especially clear about ambiguities and the Christian’s freedom on conscience. Recall of his advice on eating meat offered at the local temples, a big deal then, or holding one day more sacred than the rest (Rm 14). For him, Christians could act in differing ways towards these issues.

But behind the ambiguity of the current situation there are important historical issues to consider. In spite of much progress, many denominations of the Church still have a poor understanding, or an absent practice, of healing prayer. Very few Christians understand how to specifically pray against a virus or bacteria that is invading their body and making them sick. The general prayer, “Lord, heal me.” is usually not very effective.

The New Testament pattern against infections is modeled in the incident when Jesus rebuked the fever that was making Peter’s mother-in law ill (Luke 4:39). We don’t have the exact words he used, but a rebuke is a directed, firm negative statement. We have the exact words that Jesus used against a fruitless fig tree that caused its death (Matt 21:19). We must assume that the virus or bacteria that was affecting Peter’s mother in law received a deadly curse just like the fig tree. The infectious agents died immediately, for she recovered and began preparing supper for Jesus and his disciples.

I have used a similar form of cursing the virus or bacteria for years on myself (usually in front of a mirror) and found it very effective, I have not seen it modeled in the healing literature anywhere, but would appreciate information and correction on this. I never thought too much about it until the present pandemic, when I wrote a brief blog posting on it. Let me add that I combine the curse on the virus with words of encouragement and blessing to the immune system to be strong and resist the virus or bacteria.[1]

The Church as a whole is just recovering fro the long heresy/error of not doing healing prayer. The Reformers asserted cessationism right at the start of the Reformation, and the Catholic equivalent which restricted healing prayer to the very holy and rare people, evolved in late antiquity, and basically banished effective healing from the normal parish.[2]

Thus Church has not had successful instance in experience stilling pandemics with prayers. The Black Death, for instance, which ravished Medieval Europe ran its gruesome course with no letup in spite of desperate prayers from the Christians, as in novinas and “exposing relics,” all unbiblical. Luther, among others, encouraged Christian clergy not to run and stay and treat those who were sick even at great risk to themselves.[3] But he had not a word about effective healing prayer to still the plague.

In the 1890s and 1900s, some Holiness Evangelicals and then the Pentecostals recovered many aspects of Biblical healing prayer, as in the laying on of hands. But the Pentecostals did not figure out how to effectively pray against the influenza of 1918, and like other Christian denominations, shut down their churches until the pandemic ended. All of which is to say we still have much to learn about healing prayer and should not fault the civil authorities for their judgments about closing churches temporarily.

Further, as Christians, we must grant to government officials the right to be suspicious of Christian practices on healing and prayer. In former decades it was not uncommon to that children of Pentecostal or fundamentalist churches die because they were not taken to the doctor, or because they did not accept insulin for diabetes on the grounds that they had faith in God’s direct healing. That still happens on occasion. That form of presumption,[4] was actually a serious issue in the first healing revival, the Faith-Cure Movement of the 1890s, and did much to end that pioneer, and otherwise excellent revival.[5]

So we really should avoid thinking that the sheriff who arrested Howard Rodney Brown was some sort of anti-Christian villain. In fact, he declared that he hated doing the arrest.[6] Obviously he was acting on common sense based on the woeful history and experience of the church in regard to plagues.

So what should the church do now? The most obvious thing is to up the effort in teaching effective healing prayer so that it becomes normal in practically every church in America, and which results in hundred of thousands of witnesses on effective healing prayer. Learning to pray effectively against virus and bacterial infections must be taught systematically and not just left haphazard. There will plenty of occasions to practice and refine that type of prayer in the course of a normal year. Recall that many common colds are less deadly forms of corona viruses, so that a Christian who has experience in paying against an on setting cold should have no difficulty in combating the covid-19, or any other deadly virus.

Further, churches must probe on ways to mobilize united, mass prayers against entire pandemics. I recently reported on how Kenneth Copeland and his son-in-law, the Rev. George Pearson, led a pray, watched by thousands on Copeland’s cable TV network, to come against the covid-19 virus en mass (Sunday 3/30/ 2020). Pastor George and Kenneth Copeland both “prophesized” about the corona virus Covit-19 and “judged” it to disappear “much sooner than expected.”[7] Bu judging they meant that the Christian can take Jesus’ authority over it and declare it ended. Copland elicited the agreement of his viewers (I assume mot who viewed this program went along) to form a huge network of prayer of agreement that the covid-19 would quickly weaken and dissipate. Certainly many Christian have a right to be skeptical about that prayer, as unlike praying individually against a virus (fever) there is no biblical pattern for praying against a mass plague.

But I commend the Revs. Copeland and Pearson for attempting this. They are within the New Testament mandate to “but test everything, hold fast to what is good.” (1 Thess 5:21 NRSV) If it does not work, and covid -19 runs its normal course of ending late summer or after a vaccine is developed, nothing was lost, except that perhaps both pastors will have some egg on their faces. If there is an unexplainable slowdown in the progression of the disease, then their attempt will be seen as a milestone in the history of the Church’s healing ministry. Let us see.

[4] The classic on the issue of faith or presumption is Charles Farah’s, From the Pinnacle of the Temple (Plainfield: Logos International, 1979).

The Fire of God’s Judgement

Tuesday”s (11/20/18) Thought! Chapter 5, Part 1 – The Fire of God’s Judgement Man’s judgments are always flawed, because they proceed from the finite…