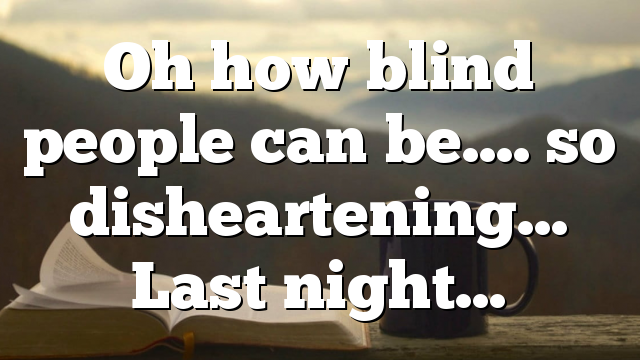 Oh how blind people can be…. so disheartening…

Last night i got to witness to a couple friends of mine, both almost 50 years old. Tonight we were going to watch “Luther”, it’s a movie about the reformer martin luther, and the one friend got a call from his mother asking what he was doing. “At Chad’s getting ready to go over to see eric with him” he said… then she asked him to tell me “not to talk about God with eric because he gets freaked out about hell”. He told me and i simply replied “I’m an american and have the freedoms of speech, and religion, I’m a minister of the gospel and cannot help but speak about the things of God. If she wants eric to go to hell that’s her business but he’ll not be able to point at me and say Chad never warned me.” He never told her that.

I asked todd if he wanted me to come over still and he did but not to talk to eric about religion. So i told him I’d just stay home because
1. I would not disobey my Lord and my God.
And 2. I wouldn’t give up my freedom of speech or religion.

On the bright side todd said i explain the gospel better than the “baptist priest” or the other baptist i had him listening too.

The Letters of John (N.T. Wright for Everyone Bible Study Guides)