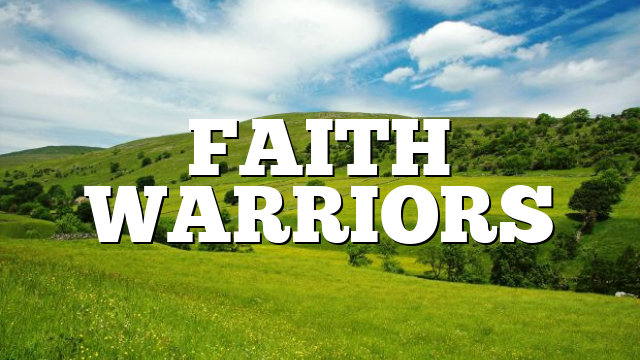 I hope You are all well and fine by the love and favour of the Living consuming fire Elohim the Creator and king of the universe.I would like to share with you few words about faith warriors in this week,Many are misunderstanding the word faith in these very moderated Christian life.Everyone say keep faith in you keep faith in your heart,but many are not understanding what is the faith?
faith is a invisible thing in our hearts and visible thing through our deeds Hebrews 11:1-2:-Trusting is being confident of what we hope for, convinced about things we do not see. 2 It was for this that Scripture attested the merit of the people of old.
It was proved by many warriors in the ancient days from the beginning we can see the list of the faith warriors in the book of Hebrews.
1.Abel:Hebrews 11:4:- By trusting, Habel offered a greater sacrifice than Kayin; because of this, he was attested as righteous, with the Elohim giving him this testimony on the ground of his gifts. Through having trusted, he still continues to speak, even though he is dead.
2.Hanok :Hebrews 11:5-6:- By trusting, Hanokh was taken away from this life without seeing death -“He was not to be found, because Elohim took him away”- for he has been attested as having been, prior to being taken away, well pleasing to the Almighty.
3.Noah:Hebrews 11:7:- By trusting, Noach, after receiving divine warning about things as yet unseen, was filled with holy fear and built an ark to save his household. Through this trusting, he put the world under condemnation and received the righteousness that comes from trusting.
4.Abraham:Hebrews 11:8-9:-By trusting, Abraham obeyed, after being called to go out to a place which the Elohim would give him as a possession; indeed, he went out without knowing where he was going. 9 By trusting, he lived as a temporary resident in the Land of the promise, as if it were not his, staying in tents with Yitz’chak(Isaac) and Ya‘akov(Jacob), who were to receive what was promised along with him.
5.Sarah:Hebrews 11:11-19:- By trusting, he received potency to father a child, even when he was past the age for it, as was Sarah herself; because he regarded the One who had made the promise as trustworthy.
6.Issac:Hebrews 11:20:By trusting, Yitz’chak
(Isaac) in his blessings over Ya‘akov and Esav made reference to events yet to come.
7.Ya’acov(Jacob): Hebrews 11:21:- By trusting,
Ya‘akov, when he was dying, blessed each of Yosef’s sons, leaning on his walking-stick as he bowed in prayer.
8.Joseph(Yosef):Hebrews 11:22:- By trusting,
Yosef, near the end of his life, remembered about the Exodus of the people of Israel and gave instructions about what to do with his bones.
9.Amram and Jochabed(Yokheved):Hebrews :11:23:- By faith Moses’ parents hid him for three months after he was born,because they saw he was no ordinary child, and they were not afraid of the king’s edict.
10.Moses:Hebrews 11:24-28:- By faith Moses, when he had grown up, refused to be known as the son of Pharaoh’s daughter.
11.People of Israel: Hebrews 11:29-30:- By faith the people passed through the Red Sea as on dry land; but when the Egyptians tried to do so, they were drowned.30By faith the walls of Jericho fell, after the army had marched around them for seven days.
12.Rahal: Hebrews 11:31:- By faith the Rehab, because she welcomed the spies, was not killed with those who were disobedient.
13.Gideon:Judges:7c.(Hebrews 11:32):-Judges 7:20:- The three companies blew the trumpets and smashed the jars. Grasping the torches in their left hands and holding in their right hands the trumpets they were to blow, they shouted, “A sword for the Elohim and for Gideon!”
14.Barak:Hebrews 11:32,Judges 4:14:- Deborah said to Barak: “Get going! This is the day when the Elohim will hand Sisra over to you! Adonai has gone out ahead of you!” So Barak went down from Mount Tavor with 10,000 men following him;
15.Samson:Hebrews 11:32;Judges:15:18-20:- Then he felt very thirsty, so he called on Adonai, saying, “You accomplished this great rescue through your servant. But am I now to die from thirst and fall into the hands of the uncircumcised?”19 Then Elohim made a gash in the crater at Lechi, and water came out. When he had drunk, his spirit came back; and he revived. This is why the place was called ‘Ein-HaKorei [the spring of him who called], and it is there in Lechi until now. 20 He judged Israel in the period of the P’lishtim for twenty years.
16. Jephthah Hebrews 11:32;Judges 11:32:- So Jephthah(Yiftach) crossed over to fight the people of ‘Amon, and Almighty handed them over to him.

Many ore are there like David , Samuel etc.. And what more shall I say?
you can study on this subject in this 11th chapter of the book of Hebrews.Now how we are in the faith our Savior asked them in Matthew 17:20:- He said to them, “Because you have such little trust! Yes! I tell you that if you have trust as tiny as a mustard seed, you will be able to say to this mountain, ‘Move from here to there!’ and it will move; indeed, nothing will be impossible for you!”

why we are not doing like that? do we have not that type of faith or trust? we can understand about for faith or trust, we have no power to do thing with our faith but we are telling the words with our mouth and lips, we have need to correct our faith according to the words of the Almighty and through prayers. we need to test ourselves before the mighty words of our Creator.
Thank you so much for understanding my view see you again.
your loving Brother in El Shaddai.
Chandra.