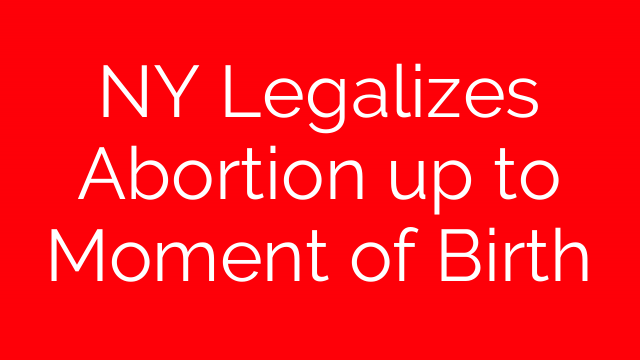 NY Legalizes Abortion up to Moment of Birth, Defines Person as Someone ‘Who Has Been Born’

New York Gov. Andrew Cuomo signed into law Tuesday a bill that goes beyond Roe v. Wade by making abortion a “fundamental right” up to the day of birth and banning limitations on abortion that the Supreme Court has permitted.

The new law, known as S240 in the state Senate and A21 in the Assembly, passed both houses and was signed by the governor all on the same day — the anniversary of the 1973 Roe v. Wade ruling that legalized abortion nationwide. The Senate passed it by a vote of 38-24, the Assembly 92-47. Both are controlled by Democrats.

It was called the “Reproductive Health Act.”

“May almighty God have mercy on the state of New York,” someone from the public gallery shouted after it passed the Senate.

“Supporters of RHA claim it merely seeks to update New York’s laws to make them consistent with Roe v. Wade. This claim is false,” the New York group said. “The changes this bill would make instead would authorize abortion through all nine months, for any reason, with no restrictions, up until birth, and even after birth if a child is born during the course of an abortion (i.e. infanticide).”

The new law prohibits limitations on abortion that the Supreme Court has permitted, such as waiting periods, parental involvement laws, and bans on partial-birth abortion.

Kenneth Copeland and Rod Parsley are ready to come into agreement for your miracle. Miracle, Healing and Victory Jubilee Prayer Cloth Service 2015. Ricky…