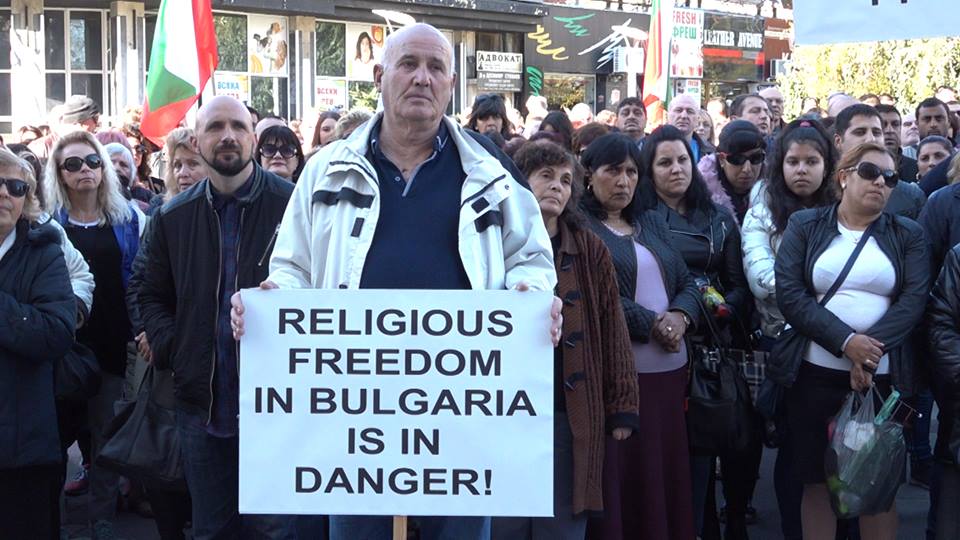 How can you help:

After a month of protesting in front of the Bulgarian parliament, this week the Bulgarian church is bracing for the new legislation on religious freedom proposed by Parliament. The second and final vote on this highly restrictive law is scheduled to take place without any further discussions. Since the legal provision was proposed by three political groups, there is no one in parliament to oppose it and except a miracle occurs it will enter in power immediately.

If this restrictive bill becomes part of the law religion in Bulgaria, virtually ALL protestant evangelical churches will be required to register ANEW with the government. Currently, a new church registration with the Sofia capital court takes 6-8 weeks. IF ALL 178 denominations in Bulgaria have to register again at the same time, the court will be overwhelmed with the extra work and may take months to issue new registrations. Since a new registration will require the denomination to have a minimum of 3,000 members, an extra time for gathering membership lists will be required as well. To initiate a registration, the court must receive membership roll of 3,000+ signed with their names, addresses and social security numbers (!)

Finally, there is the question of religious education in Bulgaria. Only religious groups who represent over 1% of Bulgaria’s seven million population will be allowed to have their own religious schools. All evangelical Protestants in Bulgaria do NOT represent over 1% of the population of the country. Under the new legislation, as it stands, they will NOT be able to operate their own schools. For example, the Church of God college and seminary in Bulgaria has been already inactive since 2009. If this current legislation passes and remains active for even a decade, a whole generation of Bulgarian ministers will have no opportunity to obtain any Bible education and ministerial training whatsoever; which basically guarantees the permanent decapitation of the evangelical movement in Bulgaria.

IF the new bill becomes part of the law by the end of November, it will make it virtually impossible for evangelical churches to hold services on the following Sunday.

For this reason, many evangelicals in Bulgaria are set to hold a three-day national fast and yet another (forth) open air protest on Sunday as they may not be legally permitted to meet for a church service under the new law.

PENTECOSTAL THEOLOGY PHONE APP Became aware while taking to pastor David M. Hinsen today, that many in the group have not yet tried the…