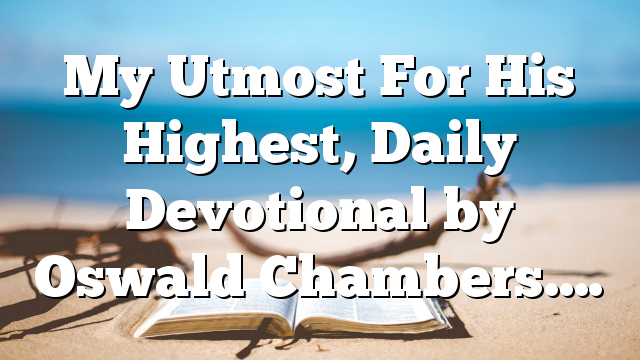 My Utmost For His Highest, Daily Devotional by Oswald Chambers.
January 10
The Opened Sight

This verse is the grandest condensation of the propaganda of a disciple of Jesus Christ in the whole of the New Testament.

The first sovereign work of grace is summed up in the words — “that they may receive remission of sins” (RV). When a man fails in personal Christian experience, it is nearly always because he has never received anything. The only sign that a man is saved is that he has received something from Jesus Christ. Our part as workers for God is to open men’s eyes that they may turn themselves from darkness to light; but that is not salvation, that is conversion — the effort of a roused human being. I do not think it is too sweeping to say that the majority of nominal Christians are of this order; their eyes are opened, but they have received nothing. Conversion is not regeneration. This is one of the neglected factors in our preaching today. When a man is born again, he knows that it is because he has received something as a gift from Almighty God and not because of his own decision. People register their vows, and sign their pledges, and determine to go through, but none of this is salvation. Salvation means that we are brought to the place where we are able to receive something from God on the authority of Jesus Christ, viz., remission of sins.

Then there follows the second mighty work of grace — “an inheritance among them which are sanctified.” In sanctification the regenerated soul deliberately gives up his right to himself to Jesus Christ, and identifies himself entirely with God’s interest in other men.

Perry Stone: 100 House members to support a bill to outlaw churches and ministers to say gay lifestyle is sin

What happened to this prophetic utterance? Assembly Bill 2943 now reads: A religious ministry could not hold a conference on maintaining sexual purity if…