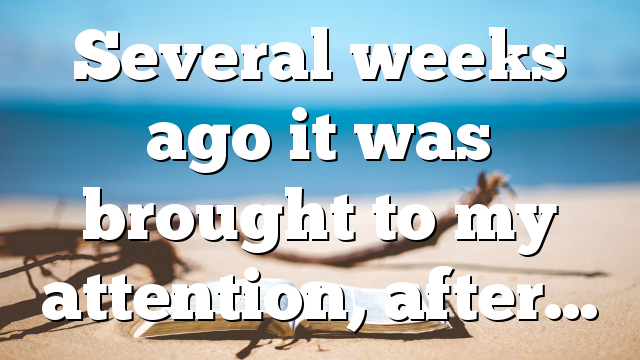 Several weeks ago it was brought to my attention, after me posting some daily devotions from Os Hillman, that he had sided up with some Dominion Theology people, I was given a site to check out. Mean while I stopped posting his teachings on this particular board, until I was finished checking the site and Os Hillman out. I have checked the site out and have checked out Mr Hillman. I not only read a bunch of Os Hillmans material, looking for what the article accused him of.
Other than me seeing where Os Hillman was tied into the 7 Cultural Mountains and what it stands for, I did not find any of his teachings where I felt like or believed he was into Dominion Theology, that said I thought it would be good if I ask him about this stuff. I called him got his answering machine, I left my name and phone number. It took him a couple of weeks but he did return my call. We spoke for close to an hour concerning his beliefs and the teachings.

I ask him point blank questions and he answered every question without hesitating. I promise you his answers were nothing like that article said. The only thing that was as the article said was he admitted he knew the men the article said. I ask him about being tied into NAR or New Age, he denied either, he said he didn’t know what NAR was all about and as to New Age he said he is totally against any part of it. I ask about dominion theology, He said he does not teach or believe in dominion theology, he said, first it’s unbiblical, while he said the bible does mention dominion, but because people have freewill’s it would be ridicules and wrong, to try and teach that anyone would or should believe in Dominion Theology.

I ask him about the men he was tied into with, he said he does not belong to any organization nor does he belong to any particular church as far as Peter Wagoner he hasn’t see him for years and the one man that did start with the dominion stuff he disfellowshiped with him years ago. He said because he does not believe in that. He did say the man has some strange beliefs that he couldn’t agree with. As to the other two men that started the 7 Mountains of culture he explain how that came about and said he doesn’t agree with everything they do but in all fairness that teaching has been totally misunderstood and said to be something that it’s not. He reiterated several answers to questioned asked on a Question answer site of his. You can go here and read it,
http://www.7culturalmountains.org/pages.asp?pageid=107994 also you can read his beliefs here as well.

I ask him about where I read that they don’t believe in the rapture or they believe that there will be no rapture until they have full control of the planet earth thus “Dominionism”. He said, well, I am not a theologian but I do believe in the rapture and it’s foolishness to say he doesn’t or that he has anything to do with trying to dominate the earth. He said he does not believe that nor teach it. He said he doesn’t teach the rapture because he’s thinks for many it leads them to escape mentality. He think they would do better to be taught to solving societal problems through love, compassion and service as following the example of Jesus Christ.

We discussed quite a bit of things, I am confident because of the much materials of HIS that I have read the pass few weeks and the conversation we had, there is no reason for me to believe he’s in to Dominion Theology, New age or anything thing like that. He said that he’s willing to come speak to any group and answer any questions that they might have about him and his ministry, he stated his calling was and is to the Market place. There is much more I could say but I think this should put fears to rest that this man is not into Dominion Theology or New Age ect. I believe the man was honest with me and I didn’t sense at anytime during our conversation that he was hiding or not willing to talk about anything I ask him.

I will continue posting his material on my Facebook until I see where he’s getting off base and getting into Dominion Theology, New Age or whatever. I won’t post his material in here anymore unless I have permission to do so by the owner of this board.

Rico Hero Peter Fiske, the first person to preach an old earth is Moses through the inspiration of the Holy Spirit about 1600 BC….