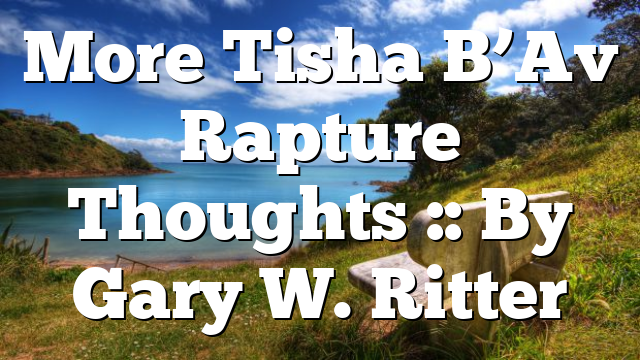 The potential for the Rapture of the church to occur on the Jewish day of mourning known as Tisha B’Av, i.e., the 9th day of the month of Av, has become a topic of much interest lately among pre-Trib Rapture adherents. After reading a couple of well-written discussions on this subject, I figured I might as well accept the challenge and weigh in since I have a different perspective.

In his terrific article titled A Pattern with a Hole, Greg Lauer postulated that the destruction of Israel’s two prior temples indicates a pattern that may apply prophetically in the near term to the Rapture. His basic premise is that God brought about the demise of the First Temple at the hands of the Babylonians following Israel’s rebellion against God through widespread idolatry. In the case of the Second Temple, the Jews turned the Word of God into a legalistic religious observation and rejected their Messiah by crucifying Him. For this great sin of grieving the Holy Spirit, God enabled the Romans to destroy Herod’s temple and eventually allowed the nation of Israel to be lost completely.

The hole that Lauer sees is that the Jews have failed to repent of these past transgressions and have even become jealous of what God has accomplished through the Gentiles, despite in His Word saying He would raise them up in His Name. There is no existing physical temple, yet judgment is coming to Israel soon through the Great Tribulation. What is the temple that fills the void in the pattern? As Greg confirms, the bodies of Spirit-filled believers are the temple of the Holy Spirit. It’s not destruction of this temple, per se, but our Rapture that eliminates it from the earth and paves the way for Israel’s punishment.

Pete Garcia added his thoughts on this topic in an article titled Tish B’Av Rapture? He wisely consulted some discerning, theologically astute friends who commented on the notion. With those added inputs, Garcia diagramed what Lauer outlined and concluded that the strongest argument for a Tisha B’Av Rapture is the additional pattern of how the Holy Spirit fits into the scheme. Temple 1 is associated with the Father; Temple 2 is connected with Jesus the Son. What happens in the Rapture? The Holy Spirit steps aside in the earth through the removal of God’s true children. When we’re snatched away by Christ in the clouds, the Man of Lawlessness can be revealed, which will lead to terrible persecution of the Jews. Thus, believers with the indwelling Holy Spirit are effectively Temple 3 and the hole which is filled in this pattern. Father, Son, and Holy Spirit all play an integral part in this narrative.

The other aspect of much interest in this discussion is the dates on which the 9th of Av in the Jewish calendar fall on our Gregorian calendar. When Greg and Pete wrote their articles on August 6-7, 2022, this year’s candidate for the Rapture was still upcoming. Sadly, we’ve now gone past that date. The next three possible dates in this regard are:

Several months ago, I wrote my speculations on Tribulation timing being tied to Agenda 2030 and the Jewish Shemitah. Based on what I laid out, any of these upcoming dates could certainly be The One, i.e., the day of the Rapture. However, my thinking on our translation from this alien world pertains to the church as the Bride of Christ and how a Galilean wedding works to model that. I laid this out in another recent post that provides this summary of events based on the four steps involved in such a wedding:

For our purposes, point #2 is critical. The father – God the Father in our case – is the One calling the shots. He has no obligation to correlate His telling the Son when to get His Bride with any Jewish feast or other ritual days. He might. He could. But there’s no direct tie-in with this scenario.

What about the pattern that Lauer so eloquently discussed? First, it’s a very cool theory. He might be right, and what I say next could absolutely be incorrect. As Pete says in his conclusion echoing Greg: We simply can’t know definitively. Thus, when I throw out my ideas, they’re as speculative as all the rest.

For this, we need to zero in on the Third Temple. We know for a fact that one will be built. Daniel 9:27 confirms this:

“And he shall make a strong covenant with many for one week, and for half of the week he shall put an end to sacrifice and offering. And on the wing of abominations shall come one who makes desolate, until the decreed end is poured out on the desolator.”

In order for “he,” i.e., Antichrist, to end sacrifice, there must be a temple in which to perform those oblations. This verse gives us some strong words: abominations and makes desolate. According to Strong’s Concordance, abominations is the Hebrew word shiqquts (#8251). It is a detested thing. The Hebrew for the term makes desolate in Strong’s is shamen (#8074). It generally means to be desolated or appalled.

The most common understanding of the abomination is that Antichrist, emulating Antiochus Epiphanes in the Maccabean period, will enter the temple and perhaps sacrifice a pig on the altar as he proclaims himself as god. From there, we have no further indication of what happens with the temple.

Discerning Jews flee just as Jesus warns them to do in Matthew 24:15-21. It is at this point that the Great Tribulation judgment comes upon Israel, and the temple is seemingly forgotten.

Here’s where I go out on the limb. Another meaning of the Hebrew shamen is to be made waste or ruined. What if… Antichrist destroys the temple after he’s made it an abomination? He knows the Jews will no longer use it, and he certainly has no reason to keep it around.

Just as with the First and Second Temples that are destroyed and mark the beginning of judgment, perhaps the Third Temple is likewise demolished. Its end serves the same purpose of demonstrating God’s wrath on Israel and the persecution of the Great Tribulation that comes next. The Holy Spirit remains present to rescue those who turn to Jesus in faith during these awful years. Thus, the pattern is completed, and the hole in it is filled.

In this circumstance, there’s no direct temple connection with the Rapture, which makes that event possible on any given day that the Father determines. The wedding symbology remains intact, and the 9th of Av is – on the surface in this case – another day of mourning.

One other point that Greg Lauer made was that the Rapture occurring on the coincident day of the other temples being destroyed, i.e., Tisha B’Av, awakens Israel to God’s spiritual hand upon them. I’m not so sure the Jews would make that connection. However, what we do know is that the Gog-Magog war of Ezekiel 38-39 surely wakes Israel to that fact. Scripture tells us that Israel is completely helpless in the face of that attack – rightly so in order for God to receive all the glory for the astounding, supernatural victory.

I think it’s this conflict that opens Israel’s spiritual eyes early in the Tribulation – perhaps as part of Seal Judgment #1. In fact, if the Bill Salus Alternative View is in play, the initial five Seals would be opened after the Rapture, but actually before the official beginning of the Tribulation through the confirmation of the Daniel 9:27 covenant agreement.

Whatever is the impetus behind the building of the Third Temple, because so many in Israel will be desirous of worshiping the God who rescued them from sure destruction, Ezekiel’s War appears to me to be the source of the Jews’ spiritual revival.

Thankfully, all this will be well in our rearview mirror as we enjoy the miracles of our glorified bodies and the consummation of our betrothal to our heavenly Bridegroom.

For those remaining on earth, they can only take hope in Jesus’ promise of Matthew 24:22:

“And if those days had not been cut short, no human being would be saved. But for the sake of the elect those days will be cut short.”

Our God is merciful. He has given us a way out – an early exit from the horror to come. What a joy it is to know the Lord Jesus and to place our faith and trust in Him!

Does Romans 7 describe the Christian Life?