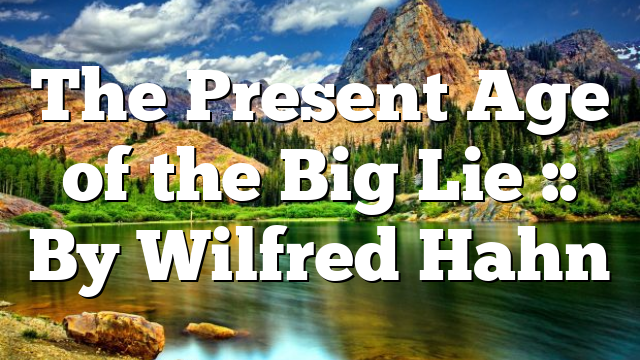 Over the decades and centuries, there have been many lethal encroachments upon Biblical truths and doctrines. Many, if not most, are still with us today. In fact, they are still with us because the lies have been systemized or the subject of long-established dogmas. People seem to believe that the more ancient and longstanding might be a belief or doctrine, the more venerable or truthful it is likely to be. This is absolutely wrong.

It is also believed that the bigger the lie, the less believable it will be. This view is also absolutely wrong. In fact, it is the big lies—the really huge lies—that are the most dangerous and alluring. The lies may be so big that they seem highly improbable. Yet, they are believed. One wonders how these false views and doctrines could even be accepted by both the gullible and scholars alike.

We observe that the most dangerous of lies are the big ones that seemingly are the most unbelievable. These are so big and repeated that they are no longer discernible to the masses.

Why are big lies so successful in attracting belief? And how is it that the most colossal and biggest lies are the most successful of all? Rulers and political strategists have understood this apparent human flaw, to be vulnerable to big lies and propaganda. If you are going to lie, make it a big lie. But how must one bring this about?

Thus was born the strategy of the “Big Lie.” Consider, for example, Adolf Hitler’s perspective, which was heavily influenced by Joseph Goebbels, the propaganda minister to the Nazi regime at that time.

Quoting Goebbels: “The most brilliant propagandist technique will yield no success unless one fundamental principle is borne in mind constantly. It must confine itself to a few points and repeat them over and over.” Elsewhere he further elaborates (and we again quote): “If you tell a lie big enough and keep repeating it, people will eventually come to believe it. The lie can be maintained only for such time as the State can shield the people from the political, economic and/or military consequences of the lie. It thus becomes vitally important for the State to use all of its powers to repress dissent, for the truth is the mortal enemy of the lie […].”

The Nazi regime was highly successful in its manipulations of truth. Historian Zachary Jonathan Jacobson describes its uses and successes in Nazi Germany: “Adolf Hitler first defined the Big Lie as a deviant tool wielded by Viennese Jews to discredit the Germans’ deportment in World War I. Yet, in tragically ironic fashion, it was Hitler and his Nazi regime that actually employed the mendacious strategy. In an effort to rewrite history and blame European Jews for Germany’s defeat in World War I, Hitler and his propaganda minister accused them of profiting from the war, consorting with foreign powers, and ‘war shirking’ (avoiding conscription).

“Nazi fascism hinged on creating one streamlined, overarching lie. […] The Nazis built an ideology on a fiction, the notion that Germany’s defeat in World War I could be avenged (and reversed) by purging the German population of those purportedly responsible: the Jews.

“Jews, Hitler contended, were the weak underbelly of the Weimar state that exposed the loyal and true German population to catastrophic collapse. To sell this narrative, Joseph Goebbels insisted ‘all effective propaganda must be limited to a very few points and must harp on these in slogans until the last member of the public understands.'”

The Strategies of the Big Lie

The techniques of The Big Lie that we cite here have obviously been utilized in the political realm. However, they can apply to all “big lies.” We see these principles being implemented virtually everywhere—religion, geopolitics, and the field of economics—whether over the short-term or over centuries.

Just what lies of this scale can be seen today? They are many. We will name some colossal lies that have persisted till recent times … in no particular order:

The above-mentioned lies are indeed colossal, as they destroy or hide key fundamental truths. Many more can be added … for example, certain aspects of the “climate change” views.

Is the technique of the Big Lie surprising? It shouldn’t be. Why? Prophecy indicates a time of great “false witness” at the end of days. The Bible tells us that lies and intrigue will increase. Zechariah 5:3, for example, prophesies that the latter-day world would be characterized by two main conditions—lying (swearing falsely) and theft (stealing and greed). The result is a world rampant with lies and intrigue.

And, indeed, we observe these conditions increasing with greater intensity today.

For example, statistics today are crafted to cover up lies. They are manipulated to conceal facts and truths rather than to reveal. We find falsehoods institutionalized at many levels.

People are adept at “spinning” facts to support whatever deceiving view they wish. The facts are treated as malleable; the truth is subject to change. To this end, the Russians have an infamous saying: “History is like the weather: It constantly changes.” Ergo, past truths and facts change.

Even secular authors and societal observers are identifying our day and age as chronically untruthful. A number of books and essays on this condition have been published in recent times. For example, “Liars in High Places: Who Is to Blame for Misinformation?” (Foreign Affairs, November/December 2021); or, Liars: Falsehoods and Free Speech in an Age of Deception (Cass Sunstein, Oxford University Press).

In the latter referenced book, the author goes so far as to say that Americans are living in “an age of deception.” It is evident that in recent years, not only have lies become more prevalent in the public domain, but also the greater the flagrant lies, the less the shame in promoting them.

The Bible expressly says: “God is not a man that He should lie, nor a son of man that he would change his mind” (Numbers 23:19). God cannot lie. It would be impossible. Thus, He is Truth.

God hates lies. Why? They are the foundational tactic of Satan, the enemy. Many references in the Bible underline God’s hatred of lies.

Yet, why were lies allowed in God’s creation? The short answer: Because truth must exist. Think about it. Were there no such thing as the concept of “truth,” then there would not be any lies.

However, God allowed lies to exist as part of the strategic landscape of the epic cosmological battle that would, in the end, validate His sovereignty and might. Therefore, it is no surprise that Satan would tactically use lies in his war to defy God. It is the only method the Creator has allowed: “Did God really say…?” (Genesis 3:1).

In the battles against lies and falsehoods, it should be noted that there are no limitations or holds on brutal techniques. The enemy will do anything and everything to keep falsehoods hidden.

Satan is the father of all lies. Said Jesus Christ: “You belong to your father, the devil, and you want to carry out your father’s desires. He was a murderer from the beginning, not holding to the truth, for there is no truth in him. When he lies, he speaks his native language, for he is a liar and the father of lies. Yet because I tell the truth, you do not believe me!” (John 8:44-45).

In response to the actions of Hananiah, the prophet Jeremiah said: “The LORD has not sent you, yet you have persuaded this nation to trust in lies” (Jeremiah 28:15).

Wilfred J. Hahn is a global economist/strategist. Formerly a top-ranked global analyst, research director for a major Wall Street investment bank, and head of Canada’s largest global investment operation, his writings focus on the endtime roles of money, economics and globalization. He has been quoted around the world and his writings reproduced in numerous other publications and languages. His 2002 book The Endtime Money Snare: How to live free accurately anticipated and prepared its readers for the Global Financial Crisis. A following book, Global Financial Apocalypse Prophesied: Preserving true riches in an age of deception and trouble, looks further into the prophetic future.

The post The Present Age of the Big Lie :: By Wilfred Hahn appeared first on Rapture Ready.