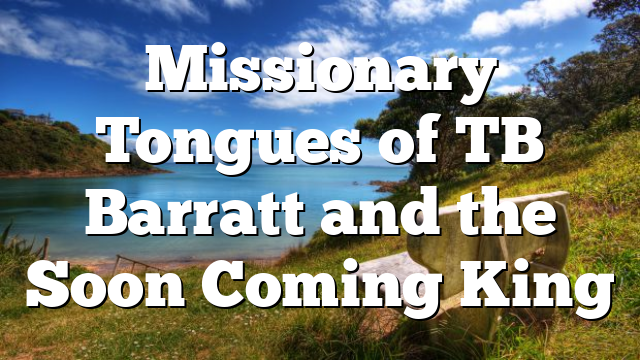 An expert in European Pentecostal history, Geir Lie, introduces readers to his in-depth look at Pentecostal pioneer T. B. Barratt and the early emphasis of Pentecostals that has often been forgotten.

The history of Thomas Ball Barratt (1862-1940) and his role in the origins of not only the Pentecostal movement in Norway, but in most countries within Western Europe, is fairly well known among Pentecostal scholars. The purpose of this article is partly to challenge a previous claim that Norwegian Pentecostalism in its initial stage did not reflect the missionary tongues concept. What is implied by that claim is that speaking in tongues was not the most characteristic feature of the early Pentecostal movement, contrary to what many tend to believe. In fact, tongues speech was generally understood to be secondary to and arising out of what could be characterized as a millenarian belief system.

Early Pentecostals believed Christ’s imminent return would be preceded by a world-wide revival, and the gift of missionary tongues would function as a tremendous evangelistic tool.

It is common knowledge among Pentecostal scholars that Charles F. Parham, who gave notoriety to the initial-evidence Spirit baptism teaching in the USA, preached a millenarian message. Christ’s imminent return would be preceded by a world-wide revival, and the gift of speaking in tongues (not understood as glossolalia but instead as xenolalia) would function as a tremendous evangelistic tool, as it implied speaking existing human languages. Tongues speech was actually the very key to spreading the Gospel effectively to all corners of the world, which, in turn, would usher in the return of Christ. The understanding of tongues as an eschatological sign and as a legitimization of the missionaries’ end-time message, however, only lasted through 1908-9 as several returned to their home country in disappointment and failure, although Parham never abdicated from this doctrine. From about 1909, tongues were redefined as a ‘heavenly language’ (now understood as glossolalia), although God, exceptionally, might give somebody a human language they had never learned naturally (xenolalia), as was the case with the 120 believers on the Day of Pentecost. This redefinition of the purpose of tongues speech was not published from the rooftops, though, and gradually people seemed to forget that the concept of missionary tongues was no minority position, but rather, the accepted belief by all the early Pentecostals.

In addition to strongly suggesting that the missionary tongues concept was also taught by Barratt during the first stage of his Pentecostal experience, this article will challenge the identification of the millennial thesis to have originated with Robert Mapes Anderson in his first edition of Vision of the Disinherited in 1979. This is a serious challenge since Anderson’s thesis was considered groundbreaking among American academicians. This same claim was set forth as early as 1928 in a Norwegian book entitled Dommedagsventing by author Thorstein Gunnarson.  As the originator of Anderson’s millenarian thesis, Gunnarson should be duly credited.

Did early theologians use astrology?

Early theologians, used the widespread interest in astrology to help make the case that the ” star of Bethlehem ” led wise men to…