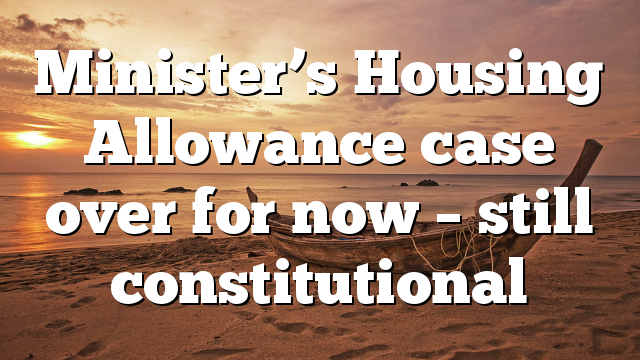 In another surprising move, the Freedom From Religion Foundation has decided not to seek United States Supreme Court review of the Seventh Circuit Court of Appeals’ March 15, 2019 unanimous decision, holding that the ministerial housing allowance did not violate the U.S. Constitution.

DALLAS, Texas – Litigation challenging the constitutionality of the minister’s housing allowance has formally ended after the Freedom From Religion Foundation chose not to appeal a Seventh Circuit Court of Appeals decision to the U.S. Supreme Court.

The FFRF, which won a challenge to the housing allowance in a district court on December 31, 2017, lost during an appeal to the Seventh Circuit when a three-judge panel ruled unanimously to overturn the lower court’s decision. The minister’s housing allowance was codified in federal tax law in 1954,

GuideStone® Chief Legal Officer Harold R. Loftin Jr., who has monitored this and other challenges to the housing allowance, and attended the oral arguments before the Seventh Circuit panel in Chicago, praised the ending of the case. GuideStone has actively engaged in the various challenges to the housing allowance exclusion, filing amicus briefs alongside Southern Baptist and other denominational benefit plans and advocating with legislators and regulators.

“The Freedom From Religion Foundation said that they believed given the composition of the Supreme Court that the could not prevail in the case,” Loftin said. “We believe that their case had no merit, regardless of the ideological makeup of the court, but regardless, are thankful that this matter has been put to rest for the time being.”

“GuideStone will continue to monitor alongside our Southern Baptist family, and as part of a coalition of large and historic pension boards, both litigation and legislation related to the housing allowance to advocate on behalf of the pastors we are privileged to serve.”

In 2017, the Freedom From Religion Foundation won a district court ruling that declared the minister’s housing allowance unconstitutional. That decision was stayed, pending the resolution of all appeals. It was overturned early in March 2019. A similar ruling, made by the same judge in 2013, was overturned on appeal in 2014.