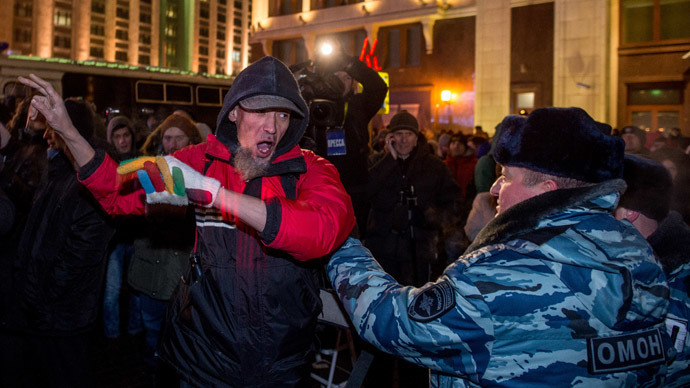 «Antièkstremistskie» the laws enacted recently in the Parliament and is reminiscent of similar norms adopted by the Russian State Duma, have triggered yesterday’s rioting in Kiev. Fuel to the fire to kill the indecision of the “official” of the Ukrainian opposition, is not able at this stage to send Energy Independence in a constructive direction. Another popular Assembly 19 January once again brought together more than 100 thousand. the man, however, a clear plan to counter the regime of Yanukovych protesters had not heard. As a result, thousands of people went to the Parliament and were stopped by the Eagles on the street. Hrushevsky, near the stadium. Lobanovsky. Clashes broke out, during which more than 70 law enforcement officers.

The majdanovcev initiative have undertaken radical groups, members of the Association “the right sector” (UNA-UNSO, Trident, a patriot of Ukraine, white hammer, etc.). It is interesting that during the clashes sounded the famous Russian-language chants, namely, “come on, come on-the …»

The leader of the Batkivshchyna Arseniy Yatsenyuk have already hurried downplayed yesterday’s unrest and demands protesters decide one opposition leader described as “provocative”. He Beat Vitali Klitschko, in contrast, had tried unsuccessfully to speak with the peacekeeping mission during clashes between police and protesters. Today Klitschko met with Yanukovych. According to the results of the meeting should start acting Commission to resolve the political crisis in Ukraine.

HEBREW SEMANTICS OF THE DRINK OF THE BEAST (REV. 17:4)