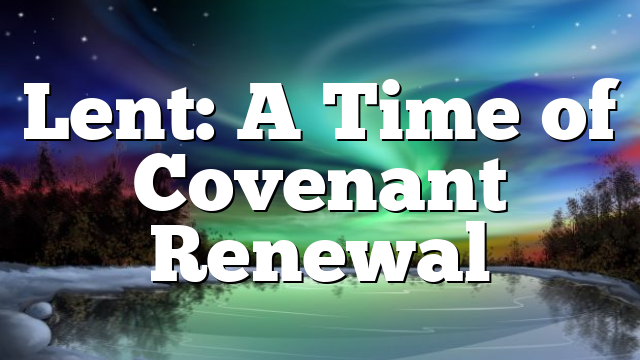 While not all Wesleyans have embraced Lent as an important Christian practice, they regularly engage in forms of covenant renewal that require confession and repentance. Ever since John Wesley initiated the love feast and an annual watch-night service to provide venues for personal testimony, common confession, and renewal of Christian commitment, all kinds of Wesleyans have employed them.

The purpose of these events was to facilitate holiness of life, where holiness was not simply a personal condition one sought after, but a communal experience of deepening fellowship with Christ and one another. In the 1944 Book of Worship for Church and Home, the order of worship for the watch-night service has the minister declare, “From time to time we renew our vows of consecration, especially when we gather at the table of the Lord; but on this day we meet expressly, as generations of our fathers have met, that we may joyfully and solemnly renew the covenant which bound them and binds us to God.” In the communion of the saints, past and present, the minister invites individual believers to journey together toward a more complete union with Christ.

For this reason, the early Methodist adaptation of camp meetings seemed a natural extension of the ethos of Methodism. Stemming from the old Scottish Presbyterian “communion season,” the camp meeting offered a time of covenant renewal that climaxed in the celebration of the Eucharist. Souls unburdened of sin at the altar of repentance were led to drink from the cup and eat the bread at the altar of communion. The camp meeting and the occasional revival service were viewed in relation to the need for ongoing confession and repentance in the Christian life.

These great festivals of the Methodists came down to their holiness and Pentecostal offspring who still practice them even though they have faded within certain sectors of Methodism. Centered upon covenant renewal, such practices have become the regular means to take on the yoke of Christ afresh and “yield ourselves anew to him.”

Wesleyans have always gravitated toward festivals that advance holiness of life even when they must recover an ancient Christian practice as John Wesley did when he introduced the love feast. It is within this ethos that the rationale for participation in the annual Lenten season must be found. Lent combines identification with Christ and covenant renewal into a framework where elders in the faith join young converts in a corporate movement of death and resurrection.

When the season of Lent emerged in the fourth century, it most likely represented a coming together of a various traditions that had developed a period of fasting for candidates in preparation for baptism. Some traditions performed these baptisms at Easter, which is one reason why the pre-baptismal fast of forty days in connection to Christ’s wilderness temptation became a pre-paschal fast. Lent is an annual reminder for all believers of their baptismal vows to die unto sin that they might become alive unto righteousness.

The entire purpose of Lent is a preparation to encounter the risen Lord as one moves through the events of Holy Week. It embodies the admonition of Hebrews to strive for holiness without which no one shall see the Lord. For before one can proclaim the word of life again, one must taste, touch, and see the risen Lord. All of the spiritual senses are awakened in the journey of Lent.

Beginning with the imposition of ashes on Ash Wednesday, Lent invites Christians to remember that they were formed from the dust and yet destined for glory. The imposition of ashes places believers on the narrow path once again as they seek to humble themselves before the Lord. Nevertheless, as Athanasius says to his flock in the festal letter of 340, “the kingdom of heaven is a large one. . .and though a man enters it through a straight and narrow way, yet, having entered, he beholds an immeasurable space, and a place greater than any other, as they declare, who were eye-witnesses of these things.” The movement in Lent is from a participation in Christ’s sufferings to the glory of his resurrection. It serves as a reminder that the way of holiness is a re-ordering of affections and desires that sanctifies and enlarges one’s vision.

The Lenten season is a period of covenant renewal, the sanctification of hearts and minds in preparation to behold the risen Lord. What we find between Lent and Easter is a focus on holiness even as Easter launches one toward Pentecost where the focus is on mission. The sanctified life opens the door to the charisms that form our calling and charismatic existence. To practice Lent with our fellow Christians is a deeply Wesleyan act since it conforms to the primary intention of all the great festivals of the Wesleyan movement. And so, let us prepare to yield ourselves to Christ again.

The post Lent: A Time of Covenant Renewal appeared first on Seedbed.

What do Pentecostal Christians believe? A dove is a symbol of the Holy Spirit in Christianity As with other followers of the Christian faith,…