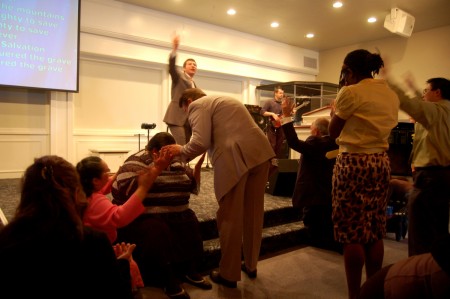 LAYING HANDS when CASTING out DEMONS?
Beloved “try the spirits.” There are many spirits we do not want to have anything to do with. There is our own spirit; the flesh and the devil. There are many spirits contending, and many times we let our own spirit rule and make ourselves think it is God; the same, with the flesh and the devil.

“The Occult Version of Laying on of Hands

When Demon-Inspired Believers Lay Hands On You

You’ve probably fallen victim to malicious gossip through the lips of another Christian. But physical assault gives a literal meaning to wrestling principalities and powers, rulers of the darkness of this age, and spiritual hosts of wickedness in the heavenly places (Eph. 6:12). Indeed, when a demon physically attacks you through a believer, a wrestling match with the flesh and blood that’s hosting the foul spirit can ensue.

Would MARIA WOODWORTH-ETTER  have approved of the Toronto Blessing of today?

Live a better life now. Erik Van Alstine author of Automatic Influence talks about emotional intelligence and the part it plays in our perception,…