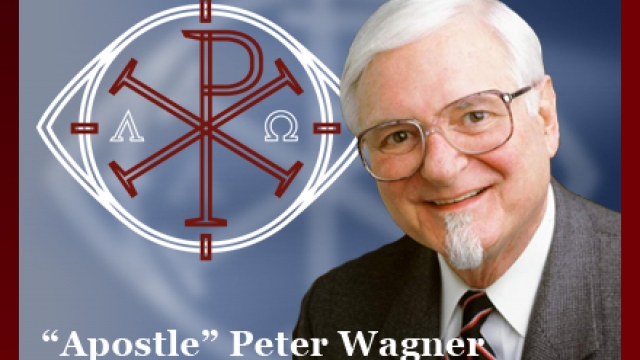 Peter A Vandever [11/30/2015 1:28 PM]
Wagner does not claim to be an Apostle. He claims there are apostles today and he is right. TL Lowery makes the same claim but no one is throwing him under the bus.

‘Third Wave’ doesn’t mean some kind of cult. It was a term Wagoner came up with as a church growth professor to describe evangelical churches that believed in spiritual gifts, but weren’t historically a part of the Pentecostal or Charismatic movements. Charismatics came a little earlier and were a part of the ‘mainline’ denominations initially.

Link Hudson [11/30/2015 5:40 PM]
I think I’ve read one of Wagoner’s books, a rather dry book from the 70’s about how your spiritual gifts can help your church grow. I’ve read bits and pieces and seen a few clips, and I’ve encountered other people with apparently similar beliefs who were from this movement. I saw an interview with Wagoner about this movement, too. He wrote an academic book trying to label as a movement churches that had ‘apostles’ as leaders and various other characteristics. Some people talked to him about being the leader of this movement or a leader of this movement later on.

I don’t think the definition of ‘apostle’ is ‘He’s so anointed, he must be an apostle.’ I don’t see their role as primarily being some sort of overarching leadership for the church, serving in a role like archbishops or cardinals in the Roman Catholic Church. We don’t see apostles trying to find existing churches and talking them into letting them be the daddy to the leaders of the church.

We do see Barnabas and Saul referred to as ‘apostles’ after the Spirit to spoke to separate them to the work. They preached the Gospel from city to city. New churches were formed. I believe in the role of apostle, but in the sense that it models the Biblical role. Paul was a father in the gospel to the Corinthians, but he had actually introduced the Gospel of Christ to them. He didn’t just show up after the church had formed and meet some emotional need of theirs to have a daddy.

John Kissinger [11/30/2015 5:41 PM]
Taliban – NO Cult – YES. Though, the talibanistic in kingdom-now and reconstruction theology is also pretty evident at a glance

Link Hudson [11/30/2015 5:44 PM]
I don’t know if the so-called ‘spiritual warfare’ is really an integral part of the NAR. That is one area where I am very concerned with what I’ve heard about Wagoner and the bits I’ve read. When I hears some of the so-called ‘spiritual warfare’– yelling at principalities– it reminds me of II Peter 2 and Jude 9. One thing we should learn about the passage is that we should not ‘speak evil of dignitaries.’ Jude illustrates this by giving an example of Michael not rebuking Satan with a harsh allegation before the Lord.

I don’t see any reason in the Bible to think that I can solve any problem by naming a demon or principality after the problem, and then rebuking the demon or principality. For example, if a city has a problem with murder, the Bible doesn’t give us any teaching or example of rebuking all the demons of murder out of that city. If a city has traffic jams, I don’t see any reason to think that I can create a ‘spirit of traffic jams’ to rebuke and kick out with a word just because I named it.

If I guess right and rebuke all the spirits of murder out of a city, and then we don’t evangelize the city and win people to Christ, might not those spirits come back with 7 times the reinforcements? The idea that rebuking all the spirits out of a city is a cure doesn’t have any Biblical backing, and it isn’t a logical idea. Paul did spiritual warfare with spiritual weapons, like the word of God. II Corinthians 10 talks about ‘casting down imaginations and every high thought….’ It is a battle in the realm of ideas that involves skillful use of the word of God.

John Kissinger [11/30/2015 5:45 PM]
‘spiritual warfare’ is a VERY integral part of the NAR – most of their international churches are based on the SLSW + business networks http://youthapologeticstraining.com/strategic-level-spiritual-warfare/

Link Hudson [11/30/2015 5:48 PM]
Lots of Gereja Bethel Indonesia churches, which are part of the global COG denomination out of Cleveland, have embraced these ideas of ‘spiritual warfare.’ It irritated me to hear them call talking to the devil and demons ‘prayer’, in the phrase ‘spiritual warfare prayer.’ I saw a lot of this in one of the Bethany churches. I visited another GBI once that had a comic book for children where a child was being bullied. The solution at the end of the book was when the bully was attacking him, he rebuked the spirit in the bully, naming the spirits in the bully after his problems, and the guy stopped attacking him.

John Kissinger [11/30/2015 5:50 PM]
Part?Hardly! GBI has far-reaching autonomy within CoG and is its largest national association. They also have many AG associations

John Kissinger [11/30/2015 5:52 PM]
On 5 February 1967 Bethel Full Gospel Church signed a contract of unification with Church of God. However, on October 6, 1970, due to disagreements among the leaders of the church, the church was again re-registered under the name Bethel Church of Indonesia. Ministry of Religious Affairs officially registered the church under writ ? 41 of December 9, 1972. So it really depends which exactly GBI churches you’re referring to.

Link Hudson [11/30/2015 5:55 PM]
John Kissinger I’m not sure if there are any offshoots that use the name GBI, I think churches have less freedom to do so since the government requires denominations to be registered and has been known to limit the number. They use the name GBI, but COG missionaries and missions funds went there after taking the name GBI.

John Kissinger [11/30/2015 5:56 PM]
No offhots – main stream. I dont remember the name of the guy who split over 1200 congregations, but being more during Charles Page time, may be he can recall what exactly went on then Timothy Carter

Link Hudson [11/30/2015 5:58 PM]
There was a split with Bethany maybe 10 years ago, over whether to use the names of their mother churches. GBI had a lot of large denominations within the larger denomination, the way it was set up, and a lot of smaller congregations that were just under the denomination.

LANGUAGE OF THE NEW TESTAMENT KOINE GREEK: Koine Greek (common Language) was the street language spoken in homes and shops. It had a brogue…