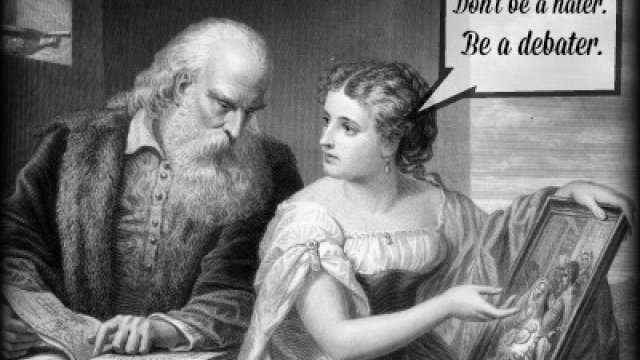 You can’t seriously tell me that you’re interested in pursuing the truth without being open to the idea that there are areas where you’re wrong. Sharpening your beliefs against the beliefs others is a powerful way to put your own precepts on trial.

It takes discipline to not to believe everything you hear, while being pliable enough not to simply dismiss others’ ideas.  This is why healthy debate can be a valuable thing. Again, that’s if you’re willing to entertain the idea that you’re the one off the mark.

I touched on this in a post entitled, What Would It Take to Admit You’re Wrong?

Unfortunately, I don’t see a lot of healthy debate—in myself or others. When it comes to what we believe, we tend to be pretty defensive. Our fear of looking foolish often trumps our sincere desire to wrestle with ideas. You seldom hear (or read) comments like:

“Oh wow, that’s an interesting point. I’m going to have to think about that.”
“That statistic really adds another element to this discussion.”
“You know what? I really don’t have a response.”
“I can totally see how you came to that conclusion.”
“You might be right.”

I think there are some factions of Christianity that make reasonable debate nearly impossible. Because eternity rides on every argument, there’s not a lot of room for concessions. I’ve used the term before, but I really think that theological Jenga makes an honest give-or-take debate difficult. Every belief hinges on another, and there’s a fear that pulling the wrong block could topple the whole an entire system of belief.

I don’t know how often I have had someone say, “Well, if I can’t believe that [principle, interpretation, theology], I can’t put my faith in any of it.”

In many discussions (online or otherwise), I will see people of this persuasion aggressively trying to corner people on arguments I not only recognize, I’ve used. Many of them fall under classical logical weaknesses. Here are a few of them.

This is an attempt to discredit someone by attacking their character or unrelated beliefs instead of the argument at hand. This is a classic bait and switch where you never even have to argue your position. If you can discredit the source, the argument falls, right?

But think about that a second? For an ad hominem argument to work, you have to be flawless yourself. You can’t have areas of fault in your character. You can’t have any other beliefs that are wrong or misguided.

Example: “You know that guy you quoted believes in evolution—don’t you? I can’t believe you’d entertain the ideas of someone who obviously doesn’t care about the truth.”

This is the good, old-fashioned argument from silence. It basically appeals to ignorance as evidence. The thing that makes it annoying is that it pretty much works for both sides in a religious debate.

I want to be very careful here because faith is important to me. A great majority of my spiritual beliefs are ideas I hold by faith. That said, to appeal to my subjective faith to make an objective claim is really a no win situation.

When I tell someone that they can only understand where I am coming from if they have faith—no matter how much I believe it—sounds to them like, “Hey, it totally makes sense if you pretend it’s true.”

Example: “You really don’t understand that my argument is true because you don’t have the faith to see it.”

I don’t think anyone will be surprised to hear that Christians base a lot of their arguments on the basis of biblical authority. I completely understand. The Bible has great authority in my life, too.

But to appeal to biblical authority with people who don’t accept the Bible as authoritative is silly. It is the worst sort of circular logic, and it usually makes the person you’re debating with dismiss you.

I recently saw this in an epic Facebook debate where the antagonist was claiming to give the protagonist the “full counsel of Scripture.” This meant that her interpretation was authoritative and faultless.

We can discuss your interpretation, but don’t assume that because you say that you’re speaking for God that I’m going to agree.

Example: “Of course God preordained who would be saved, it’s in the Bible. You can disagree with me, but you’re also disagreeing with Scripture.”

The Latin here literally means, “argument to the cudgel” or appeal of the stick. It’s the argument you see pulled out when you want to overwhelm your opponent with what could happen if they don’t agree with you. We could call it the Left Behind argument, “If I’m right, we’re all going to disappear in the blink of an eye and then the tribulation starts. You don’t want scorpions to feast on your face, do you?”

Example: “You know, a real smart mathematician named Pascal explained it this way, ‘If I’m right, you could die and go to hell. So you might as well believe. Because if I’m right, you won’t have to go to hell, but if I’m wrong, no harm done.”

This is the appeal to information that confirms what you already believe while ignoring what doesn’t. We all do this. There isn’t a person among us that doesn’t cherry pick information  we agree with and appeal to statistics and narratives that confirm our already set ideologies.

This is a hard one to prove in an argument because usually it’s behind the scenes coloring the conversation in ways that we can’t necessarily see. But occasionally you’ll run into online debates that have devolved into crazy cut-and-paste parties. When you check their sources you begin to see that their just googling their argument and stealing the more compelling arguments of people who agree with them.

Example: “You know this statistic proves that . . .”

It’s the classic attempt to distance yourself from the behavior of someone in your group by excluding them from it.

Example: “Yes, I know all about the Crusades, but no real Christian would ever do anything like that.”

During fox hunts smoked herring was used to distract the dogs from the scent of their prey. A “red herring” is used any time we take a debate into a whole new, unrelated direction.

This happens all the time when proof texts are dropped into an argument. It doesn’t take too long before the conversation rabbit trails into a discussion about the context or interpretation of that verse and away from the actual topic being discussed.

This is my least favorite form of debate sorcery. It’s when an argument is discounted because of an appeal to imagined consequences.

Example: “If we allow marriage equality then the next thing you know people will be marrying their sisters and pets.”

This is one of the most common fallacies used in any debate. It basically comes from the idea of creating an easily destroyed caricature of your opponents beliefs—and everyone does it.

When I read Dawkin’s The God Delusion, it was constructed almost entirely of straw men.

But we do it too. God’s Not Dead based its whole premise on the straw man of the atheist who really just hates God.

Example: “You don’t believe in God? So you obviously think that everything happens by random chance and we just evolved from tadpoles?”

What are some debate examples you could stand to hear (or use) less? I’d love to hear about it in the comments!