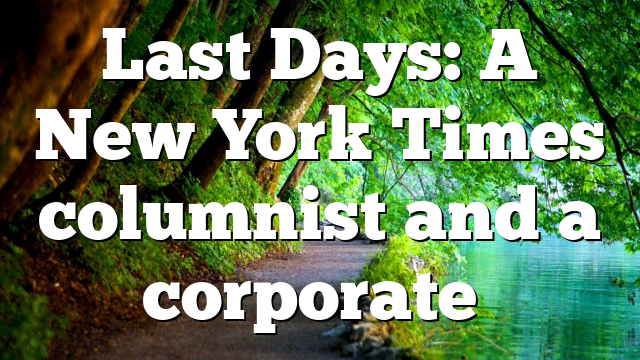 Last Days: A New York Times columnist and a corporate leader have agreed that Christian churches “must” be convinced, or coerced, to change their teachings on sexual morality and abandon an “ossified” doctrinal teaching that sex outside heterosexual marriage is immoral.

Frank Bruni wrote that traditional Christianity – whether among evangelicals, Catholics, or Orthodox – provides the greatest resistance to normalizing homosexuality in the United States in a recent column in the New York Times.

“Homosexuality and Christianity don’t have to be in conflict in any church anywhere,” Bruni insisted. “The continued view of gays, lesbians and bisexuals as sinners is a decision. It’s a choice. It prioritizes scattered passages of ancient texts over all that has been learned since — as if time had stood still, as if the advances of science and knowledge meant nothing.”

Bruni quoted furniture tycoon Mitchell Gold, who has used his millions to found a liberal pressure group Faith in America, writing that Gold believes Christian churches “must be made ‘to take homosexuality off the sin list.’”