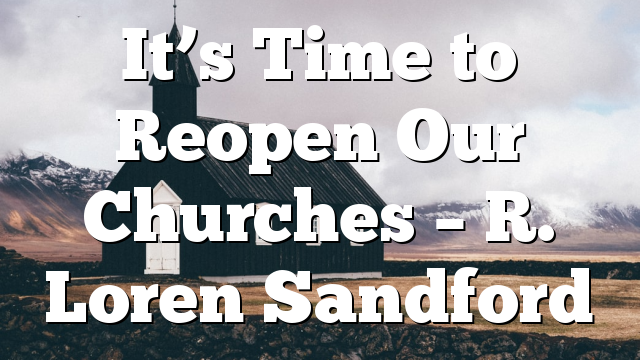 A DAY OF REGATHERING – PENTECOST SUNDAY

[Churches everywhere, let us stand in solidarity, declaring this Pentecost Sunday, May 31 a Day of the Regathering of the Churches, and each do so. The message below from pastor/prophet/author R Loren Sandford (being republished with permission) I truly believe is God’s will. Please spread the word and share it to your page so this message goes viral and brings unity of purpose. Note, that emphasis is mine. – Ray E Horton]:

IT’S TIME TO REOPEN OUR CHURCHES
by R. Loren Sandford

Pentecost Sunday is coming up May 31. It’s a special day and I want to tell you why.

Many prophetic voices, going all the way back to David Wilkerson in the 1980s up through today, have been prophesying that this coronavirus crisis will be followed by a great outpouring of the Holy Spirit. I don’t like setting dates for such things. We’ve seen too many prophecies with dates attached come and go without real fulfillment, but I do believe the greatest outpouring of the Spirit of God in history is coming and I don’t believe it will be long before we see it unfold.

Churches everywhere, let us stand in solidarity, declaring this Pentecost Sunday, May 31 a Day of the Regathering of the Churches

Some say it will actually begin on this coming Pentecost Sunday, May 31. I can’t verify that. I can’t say that God has spoken this to me, but this I do know. That date is significant. Historically, Pentecost Sunday is the day the church remembers and celebrates the outpouring of God’s Spirit and the baptism in the Spirit that John the Baptist prophesied before Jesus began His earthly ministry.

It was the day that the sound of a mighty rushing wind filled the upper room where the 120 were gathered. It was the day that flames appeared on their heads and they began speaking in tongues, praising God in languages they had not learned. The power of it drove them out of seclusion in the upper room into the street to become witnesses for Jesus, making disciples of all the nations. Three thousand men and their families came to Jesus that day because of the power they received.

All across this nation and the world, churches have been forbidden to gather during this crisis. Most have willingly complied with government orders while at the same time a chorus of voices have risen, at least in the United States, to protest this violation of our first amendment rights to freedom of religion and freedom of assembly. Most have gone along with it because they believed they were saving lives, and because they believed they should submit to the governing authorities, but as the days and weeks have passed, both the issue of whether we are actually saving lives and the issue of submission have been legitimately called into question.

Online church can never substitute for eyeball to eyeball ministry

Now in many states businesses are gradually being allowed to open. Marijuana shops and liquor stores never did close. They were deemed “essential services” by our government officials while churches were ordered to remain shut. We were labeled “non-essential”. We were supposed to be content with going online, but going online will never be a satisfying substitute for in-person contact and eyeball to eyeball ministry to one another in an atmosphere of the presence of God.

Some states – and yes, I will say states ruled by Democrats – have forbidden churches to open for many more months to come. But the worship of God and the gathering of the saints is indeed an essential service for the mental and emotional health of a stressed out and fearful people. We need that touch of God and the encouragement of fellowship face to face and eyeball to eyeball. As human beings we’re built for this. It’s the way God made us.

I am therefore now choosing to exert whatever influence I have to call for May 31, Pentecost Sunday, to be a day of regathering across this nation and even the world. Already 500 churches in California, where the governor has stated that churches cannot meet for the better part of three more months, have composed a letter to the governor of their state declaring that they will open their churches on Pentecost Sunday, May 31.

I urge churches across this nation and the world to do two things.

1) Rise up and declare May 31, Pentecost Sunday a day a day of regathering. Declare it a day when we worship together in person once more, a day when, if need be, we obey God rather than men

2) In the runup to that day, inundate the president, governors, mayors and county commissioners with letters and emails calling upon them to lift the restriction on churches. Let them know that whether or not they respond, the saints will gather.

I’m not calling for anger or a spirit of rebellion. My own church has been meeting for several weeks now in person, but we have observed social distancing guidelines, six feet between family units, hand sanitizing at the door, and masks for those who want them. And we encourage people experiencing any kind of symptoms to stay home. We do all this even though it reduces our seating capacity by 2/3. Because of the atmosphere of fear that has gripped the nation, most of our people have been fearful to come out and have watched online, but the 1/3 who have chosen to be present have attended some very powerful services of worship. And not a single person in our flock has been infected – not one as of this date.

I could be tempted to believe that these restrictions on churches are part of a conspiracy to silence the church. I don’t believe, however, that any of the political leaders who have handed down these executive orders for closure have consciously attempted anything like a deliberate attempt to shut down the witness of the church. I prefer to believe that they have been functionally blind to the value of the church for the health of society. They simply don’t know Jesus.

Demonic powers are trying to silence the voice of God

I do know that behind all of this, in the realm of the spirit, these closures have been motivated and driven demonically. As the devil has deceived well-meaning people it has been an attempt by demonic powers and principalities to silence the voice of God as He speaks through the church. It won’t work.

It’s time for us to rise up in authority as the apostles did in Acts 5 and say no. The governing body of the Jews ordered them to stop teaching in Jesus’ name. Here are the pertinent verses: “‘We gave you strict orders not to continue teaching in this name, and yet, you have filled Jerusalem with your teaching and intend to bring this man’s blood upon us.’ But Peter and the apostles answered, ‘We must obey God rather than men‘” (Acts 5:28-29).

Open your churches on Pentecost Sunday. Write the governing authorities and ask them to lift restrictions. Let them know that you will be meeting anyway, regardless of whether or not they do. Maybe, like Peter and the apostles, some of us will suffer a flogging for moving forward, but, “...they went on their way from the presence of the Council, rejoicing that they had been considered worthy to suffer shame for His name” (Acts 5:41).

Open ALL churches this Pentecost Sunday

Please let this … go viral. Post it. Copy it. Share it. Let a movement rise. I think one is already under way so please help expand it. Make a declaration. Let our voices be heard. There is power in oneness.

John Wesley On Free Will

Steve Wright HT602ON Historical Theology 2 November 17, 2014 Introduction Doctrine is critical because what you believe will determine how you live. Therefore, the…