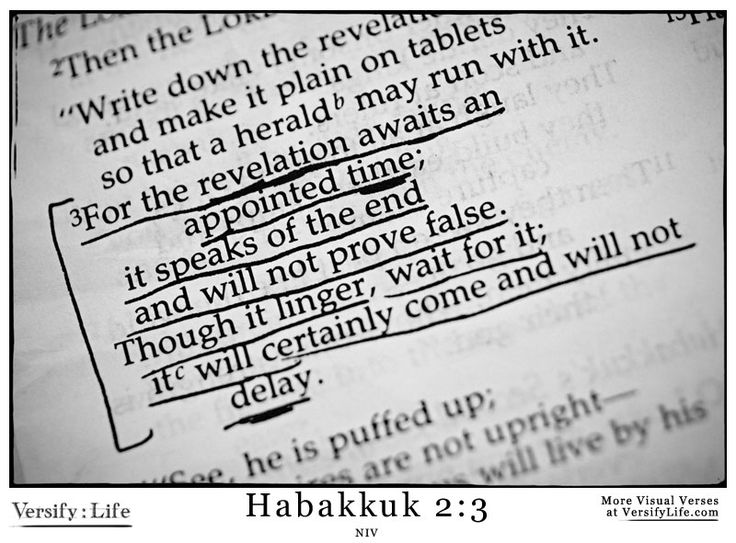 [The prophets are characterized as watchmen, watching constantly for the comfort, safety, and welfare of Gods people; and watching also to receive information from the Lord: because the prophetic influence was not always with them, but was granted only at particular times, according to the will of God.] “I will stand at my watch and station myself on the ramparts; I will look to see what he [the Lord] will say to me, and what answer I am to give to this complaint. Then the LORD replied: “WRITE DOWN THE REVELATION AND MAKE IT PLAIN on tablets so that a herald may run with it. For the revelation awaits an appointed time; it speaks of the end and will not prove false. Though it linger, wait for it; IT WILL CERTAINLY COME AND WILL NOT DELAY. (Hab. 2:1-3) [This is a very important verse. It is first applied to Babylon. God’s power and providence was widely displayed in the destruction of this city and empire, in the humiliation of Nebuchadnezzar!] “…the earth WILL BE FILLED WITH THE KNOWLEDGE OF THE GLORY OF THE LORD as the waters cover the sea.” (Hab. 2:14) [Think about where we are right now, anything we want to know is just a voice command away on our cell phones!] “The wolf will live with the lamb, the leopard will lie down with the goat, the calf and the lion and the yearling together; and a little child will lead them. The cow will feed with the bear, their young will lie down together, and the lion will eat straw like the ox. The infant will play near the cobra’s den, the young child will put its hand into the viper’s nest. They will neither harm nor destroy on all my holy mountain, FOR THE EARTH WILL BE FILLED WITH THE KNOWLEDGE OF THE LORD AS THE WATERS COVER THE SEA.” (Isa. 11:6-9) [Paul said of the day of general judgment he had spoken of before, should come as a thief in the night, when not expected; but he did not attempt to fix the time, neither did he imply that it was near at hand, or far off. Remember this was some 2000 years ago; so, he shows that it must necessarily be far off, because of the great transactions which must take place before it can come!] “Concerning the coming of our Lord Jesus Christ and our being gathered to him, we ask you, brothers and sisters, not to become easily unsettled or alarmed by the teaching allegedly from us–whether by a prophecy or by word of mouth or by letter–asserting that the day of the Lord has already come. DON’T LET ANYONE DECEIVE YOU IN ANY WAY, for that day will not come UNTIL the rebellion occurs and the man of lawlessness is revealed (the antichrist), the man doomed to destruction. He will oppose and will exalt himself over everything that is called God or is worshiped, so that he sets himself up in God’s temple, proclaiming himself to be God.” (2 Thess. 2:1-4) Be blessed as you praise The Lord, knowing that THE EARTH WILL BE FILLED WITH THE KNOWLEDGE OF THE LORD! -Bill Stockham