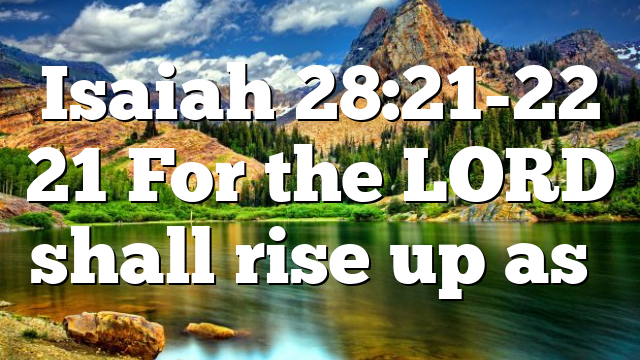 Isaiah 28:21-22
21 For the LORD shall rise up as in mount Perazim, he shall be wroth as in the valley of Gibeon, that he may do his work, his strange work; and bring to pass his act, his strange act.
22 Now therefore be you not mockers, lest your bands be made strong: for I have heard from the Lord GOD of hosts a consumption, even determined on the whole earth.

נִדְרַ֙שְׁתִּי֙ לְל֣וֹא שָׁאָ֔לוּ
I was ready to be sought by those who did not ask for me;

נִמְצֵ֖אתִי לְלֹ֣א בִקְשֻׁ֑נִי
I was ready to be found by those who did not seek me. (ESV)

The ESV (also NRSV, NET, NASB; contrast NIV, HCSB) take these two verbs – “ready to be sought … ready to be found” – as tolerative nifals, I gather.

generally with a notion of effective action….to allow oneself to be asked, and that effectively, hence practically = to answer (speaking of God)

This “efficacy” nuance is different from the “ready to…” translation of the ESV etc.

How should we decide in what way to understand the nifal here? Is this verse intended to convey something already accomplished (revealed, answered) or merely offerred?

1. The other uses of the potentially “tolerative” nifal דרש (with subject = Yahweh) are in Ezekiel; mostly these could also be taken either way.

2. The LXX seems to carry a similar sense of “effective”: Εμφανὴς ἐγενόμην τοῖς ἐμὲ μὴ ζητοῦσιν, εὑρέθην τοῖς ἐμὲ μὴ ἐπερωτῶσιν· = I became visible to those who did not seek me; I was found by those who did not inquire after me. This may have more to do with reading them as passives (“was found” + reconciliation of “did not ask” with “was sought” –> “became visible”) rather than a reflection of the translator having read Jouon, but you never know.