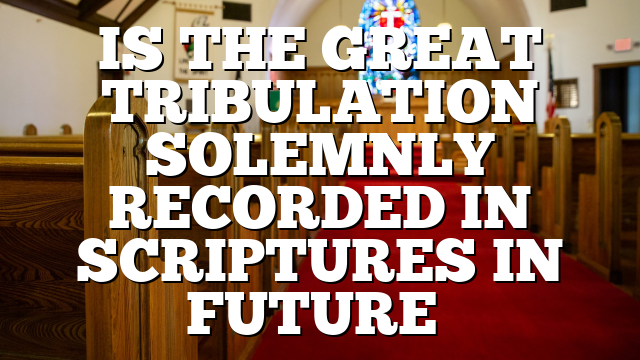 IS THE GREAT TRIBULATION SOLEMNLY RECORDED IN SCRIPTURES IN FUTURE OR NOT?
One of the reasons why ancient Israel didn’t know when the Lord visited her(Luke 19:44) is that she understood not the times and seasons of the prophecy about the messiah as it was written in Dan 9. If we too, walk blindly about the times and seasons, even the second coming of Jesus shall be unexpected. In Matt 24:15-31 is recorded the great TRIBULATION said by Jesus Himself, and in verse 15 it starts with the abomination of desolation, spoken of by Daniel the prophet, standing in the holy place( great emphasis is said for the understanding of this). Only when we understand the abomination of desolation in Dan 8:10-14 and in Dan 12:9-12 and when they happened then only can we know when was the great TRIBULATION and how it was. According to the correct words of Jesus in Matt 24:29, immediately after the tribulation the sun must be darkened, the moon not give her light and the stars fall from heaven. Now that these three things have happened consecutively as the Lord said, is evident that the Great TRIBULATION has happened and we find ourselves between the tribulation and the coming of the Son of man in the clouds of heaven with power and great glory. In revelation, where all books meet and end, the earthquake, darkening of the sun, the moon not giving her light and the falling stars happen after opening the 6th seal. Therefore, the great tribulation must be on one of the seals before the 6th seal. The prophecies of of the 6th seal began to be fulfilled with the great Lisbon earthquake of November 1,1755. Following the earthquake, May 19,1780, the sun was darkened and the moon appeared as blood the following night. Then came the falling of the stars, the great meteoric shower of November 13, 1833. The 5th seal cannot be the tribulation because souls which were slain for the word of God were seen crying for revenge and were not seen been killed(suffering), Rev 6:9-11. The 4th seal has a pale horse, death riding the horse and hell following with him. Killing is done in the 4th seal so this is the great tribulation, Rev 6:7,8. The pale(no specific color) horse and death riding the horse is the same as the non-descriptive beast of Dan 7:7,8 and death on the horse is the same as the horn(having the face of a man) and a mouth speaking great words who also wears out the saints and think to change times and laws, Dan 7:25.

FacebookTwitterSubscribe
Subscribe to receive all news to your email or phone: [wysija_form id="1"]
futuregreatrecordedscripturessolemnlytheTribulation

Acts 4:12 is NO proof for ONENESS theology

Acts 4:12 [12]Neither is there salvation in any other: for there is none other name under heaven given among men, whereby we must be…