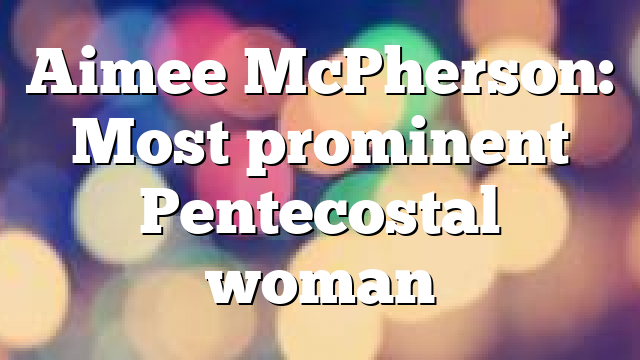 Almost six decades after her death, ‘Sister’ Aimee Sempel McPherson – the legendary Pentecostal phenomenon of the 1920s and founder of America’s first megachurch is making a comeback in Hollywood. This time she is the inspiration behind two characters in the television series, ‘Perry Mason’ on HBO and ‘Penny Dreadful: City of Angel’ on Showtime.

Likewise, in Showtime’s Great Depression-era detective series, ‘City of Angels’ –  Kerry Bishé evokes the evangelical powerhouse with her role as ‘Sister Molly,’ a radical preacher who broadcasts the gospel with her fictional radio program, ‘Joyful Voices.’ In real life, Sister Aimee became the first evangelist to pioneer radio as a means of drawing new sheep to her flock.

Aimee Semple McPherson became an American sensation in the 1920s as a glamorous and charismatic, evangelical firebrand. She skyrocketed to fame after performing a series of public faith ‘healings’ and rollicking sermons at revival meetings across the nation that drew in massive crowds.

Later, she went on to establish the country’s first megachurch in Los Angeles, that seated 5,300 spectators in the audience and drew 40 million visitors within the first seven years of opening.

FacebookTwitterSubscribe
Subscribe to receive all news to your email or phone: [wysija_form id="1"]
aimeemcpherson:mostpentecostalprominentwoman