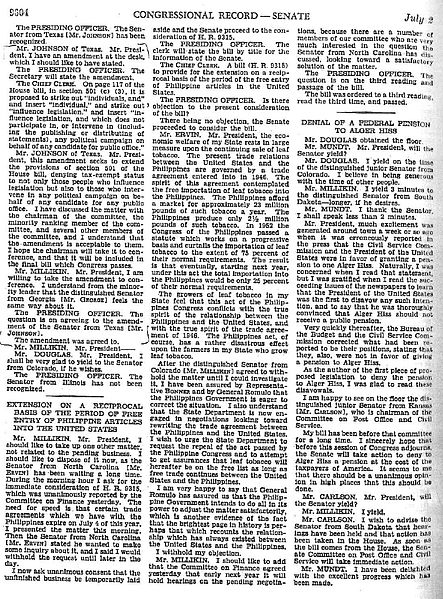 The Johnson Amendment is a provision in the U.S. tax code that prohibits all 501(c)(3) non-profit organizations from endorsing or opposing political candidates.

“The restriction was championed by (Lyndon Johnson) in 1954 when Johnson was a U.S. senator running for re-election. A conservative nonprofit group that wanted to limit the treaty-making ability of the president produced material that called for electing his primary opponent, millionaire rancher-oilman Dudley Dougherty, and defeating Johnson. There was no church involved. “Johnson, then Democratic minority leader, responded by introducing an amendment to Section 501(c)(3) of the federal tax code dealing with tax-exempt charitable organizations, including groups organized and operated exclusively for religious, charitable, scientific, literacy and educational purposes, or to prevent cruelty to children or animals. It said, in effect, that if you want to be absolved from paying taxes, you couldn’t be involved in partisan politics.” FacebookTwitterSubscribe
Subscribe to receive all news to your email or phone: [wysija_form id="1"]
amendmentjohnsonrepealwise

Today we look at the arrest, imprisonment and execution

Today we look at the arrest, imprisonment and execution of William Tyndale. http://andnowyouknowmore.blogspot.com In 1535 a friend of Tyndale betrayed him and he was…