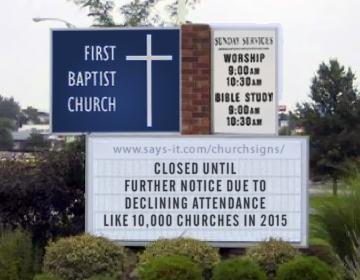 Church attendance in advanced industrial societies is in gradual general decline with people shifting from weekly to monthly or holiday attendance. Sociologists have attributed this trend to a number of reasons, starting from a simple boredom during services and lack of motivation, to generational incompatibility of belief systems and social changes attributed to modernity. Research across 65 different nations showed that out of 20 advanced industrial countries – 16 demonstrated a declining rate of monthly church attendance. An article published in the Christianity Today Magazine emphasized that at least in America church attendance since the 1990s has remained stable. Indeed, 50% of Americans replied that God is very important in their lives, comparing with 40% of Irish, 28% of Canadians, 26% of Spaniards, 21% of Australians, and 10% of the French.

What is Going on with the Church in America?

The United States Census Bureau Records give some startling statistics, backed up by denominational reports and the Assemblies of God U.S. Missions:

Practice of religion according to practice of parents (%)

In short, if a father does not go to church, no matter how faithful his wife’s devotions, only one child in 50 will become a regular worshiper. If a father does go regularly, regardless of the practice of the mother, between two-thirds and three-quarters of their children will become churchgoers (regular and irregular). If a father goes but irregularly to church, regardless of his wife’s devotion, between half and two-thirds of their offspring will attend church regularly or occasionally.

While most smaller churches with less than 1,000 will never become megachurches, they can be encouraged that churches their size can actually have more overall attendance gain (i.e. net) than many megachurches. In the Church Growth Today 100 fastest growing churches list actual gain begins at 500 people and the 200 fastest growing churches list begins at an annual gain of 200 in weekend attendance.

These two lists reveal that actual attendance gain is not the exclusive domain of megachurches who can have great growth but have more losses than gains. A church’s ability to multiply new leaders and new groups, in proportion to their size, can be a major factor. Creation of additional worship services may increase attendance but involvement in groups retains the new growth. Smaller churches tend to have fewer additional services and are able to assimilate a higher percentage of their attendance gains. So smaller churches can excel as they reach new people and care for existing members.

That said, the actual average attendance of the smallest among America’s 100 largest churches has experienced seismic gains since year 2000. A top 100 church that had 4,000 attendance could be among the 100 largest churches but by 2010 needed 8,000 to be among that group. The average size doubled mostly due to the addition of multi-site locations created by new churches and three in four of the largest churches. Multi-site churches, among these evangelical, Protestant, and non-affiliated gatherings, increased by 10 percent (up from 66 percent in 2010).

There were 329 multi-site campuses in 2010 compared to 511 in 2015 (a gain of 182 sites or 64 percent). Ten of the 2015 churches each reported having 10 or more multi-site campus worship locations. Life.Church of Edmond, Oklahoma, has 70,000 attending 21 locations (micro-churches) in seven states. Christ the King Church in Burlington, Washington, has at least 23,400 in their small church groups network.

Major shifts are trending among both small churches and American megachurches. These are seismic shifts since the 1980 book, The Complete Book of Church Growth (1981), by Elmer Towns and John Vaughan announced 2,000 attendance could include a church among the 100 largest churches. That was the first book to list the 100 largest churches in worship attendance, membership, Sunday school enrollment, Sunday school attendance, fastest growing Sunday churches, and income.

FacebookTwitterSubscribe
Subscribe to receive all news to your email or phone: [wysija_form id="1"]
americaastrayAwaychurchDeclinegenerationgodgoing

Christians Taken Captive by the Will of Satan | Perry Stone