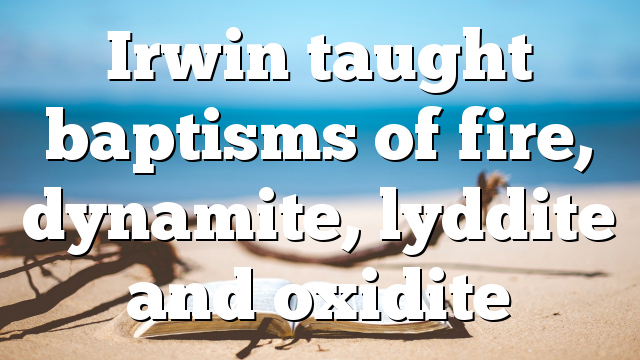 I baptize you with[a] water for repentance. But after me comes one who is more powerful than I, whose sandals I am not worthy to carry. He will baptize you with[b] the Holy Spirit and fire.

Sanctification is an act of separation from that which is evil, and of dedication unto God. Sanctification is realized in the believer by recognizing his identification with Christ in His death and resurrection, and by the faith reckoning daily upon the fact of that union, and by offering every faculty continually to the dominion of the Holy Spirit. http://www.ag.org/top/beliefs/statement_of_fundamental_truths/sft_full.cfm#9\host.

There are 7 baptisms for believers listed in the New Testament. Baptism of Fire could be Holy Spirit or persecution as early Pentecostals saw their power in being persecuted for the Gospel. We had a good discussion not long ago on the whole baptism in fire, dynamit etc. But matters little what we think about it and it’s more important what John the Baptis meant when he said: He will baptize you with the Holy Spirit and fire. (Matthew 3:11 )

The term FIRE-BAPTIZED was introduced to the Holiness movement BEFORE they were baptized with the HG.. Irwin taught of a third blessing that came after salvation and entire sanctification called the “baptism of fire.” While speaking in tongues was not unheard of among the Fire-Baptized Holiness, it was not (or perhaps not yet) understood as the initial evidence of fire baptism. This idea was formulated by Charles Parham and only began to influence the Fire-Baptized Church (est. 1895 Lincoln, Nebraska) as news of the Azusa Street Revival spread after 1906. By 1900 (i.e. before Azusa), Irwin also taught there were additional “baptisms of fire” he called baptisms of “dynamite”, “lyddite”, and “oxidite”. This “chemical jargon” never took root within the church and was abandoned by Irwin’s successors. It was also discarded by the few Pentecostal circles that adopted it once the doctrine of HS baptism was finalized at Azusa and denominations like AoG and CoG introduced their doctrinal statements. We had a great discussion about those early roots not long ago, but I cannot find the article. Perhaps Charles Page remembers it and can point you to it

Irwin became convinced that there was an experience beyond sanctification called the “baptism with the Holy Ghost and fire” or simply “the fire”. After receiving this experience in October 1895, he began to preach this “third blessing” among holiness adherents in the Midwest, particularly among Wesleyan Methodists and Brethren in Christ. His services were highly emotional with participants often getting the “jerks”, shouting, speaking in tongues, and holy dancing and laughing.

Authority Through Love and Humility

AUTHORITY THROUGH LOVE AND HUMILITY – Ray E Horton Love and humility were typically Jesus’ way to operate with authority, proclaiming and demonstrating the…