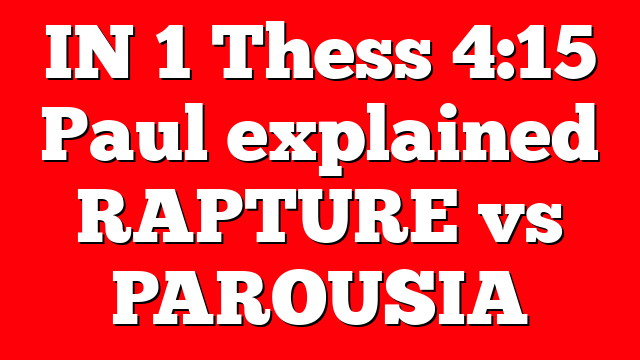 1 Thes 4 is very very clear in the chronology of events and a total eschatological order 1 Thes 5 proceeds based on that order that Paul has established in ch. 4 so do 2 Thes 1-2 you can accept that or not but it is what the apostle Paul is saying And he knew his stuff having gone to the heavens and back

What inferences can be drawn, as regards timing, by Paul’s unique use of the preposition EIS with PAROUSIA?  Should EIS be translated as “to,” “till,” “until” or “up to” and thus convey the idea that the “rapture” event could be expected early in the PAROUSIA or, should it be translated as “for” or “during” the PAROUSIA and leave the timing of the “rapture” indefinite?  Personally, I would be happy for the timing to be definite, but, my reading of pages 358-9 on prepositions in Wallace’s GGBB has disturbed my conclusions. Please bear with me as I explain how I got to the latter conclusion of the above question: I view the PAROUSIA of Jesus as a durative event. In my view it is shorter than the PAROUSIA described by Israel P. Warren but longer than just the ERXOMAI of Jesus with power and great glory. The PAROUSIA would seem to be a “state”; whether of shorter or longer duration; rather than an “achievement” or “semelfactive” event. In my study of the PAROUSIA and the events connected with it, I note that EIS is uniquely used with PAROUSIA at 1Thess. 4:15. Now, as far as I can determine, only dependent verbal participles (circumstantial or adverbial) are grammatically subordinated to their controlling verbs (usually the main verb of the clause).  At 1 Thess. 4:15 hOI PERILEIPOMENOI is most likely an independent substantival participle and as such is not grammatically subordinated to the main verb of the sentence. It could also be a nominative absolute participle but this seems less likely.  Therefore, in the clause “hOI PERILEIPOMENOI EIS THN PAROUSIAN TOU KURIOU,” EIS would not be grammatically subordinated to the main verb of the sentence, but rather to the participle. Could the participle PERILEPOMENOI at 1 Thessalonians 4:15 be viewed as “stative” and if so, would it then, override the transitive force of the preposition EIS.  On how to identify a “stative” verb Wallace on pg. 412 of GGBB states: “The key is simple: The stative occurs either with the equative verb or one that in translation uses am + a predicate adjective.” [italics mine] So, if his observation that one could identify a Greek “stative” verb by its ability to be translated using “am” + a predicate adjective, then the following English translation would seem to allow PERILEIPOMENOI to be “stative.”: …we the living who are surviving [for the presence of the Lord…] I believe that “surviving” is in this instance a predicate adjective. In this instance, EIS might then be better reflected by the preposition “for” rather than “to.” Also, on page 369 of GGBB under heading A.) Basic Uses of EIS at usage # 8  Wallace indicates EIS could be used in place of EN with its various nuances. I.P. Warren translates EN TH PAROUSIA as “during” the PAROUSIA. This translation of EN is also allowed for in BDAG and Wallace. So I say all of the above to again ask this: If it is shown that at 1 Thess. 4:15, EIS is sandwiched between a “stative” governing verb and possibly even a stative prepositional object; which really would not necessarily influence the preposition; should it then, be translated as “for” or “during” the PAROUSIA and leave the timing of the “rapture” less definite than might be allowed by the possible ramifications of the conventional translation using to/till/until/up to and viewing PAROUSIA as an “acheivement” (coming) rather than a “state”?

[] Translating EIS at 1 Thess. 4:15 [] Translating EIS at 1 Thess. 4:15 On Mar 5, 2010, at 11:58 AM, Timothy Lawson wrote:> To All:> > At 1 Thessalonians 4:15 Paul connects the timing of the so called “rapture” to the PAROUSIA. What inferences can be drawn, as regards timing, by Paul’s unique use of the preposition EIS with PAROUSIA? Text: 1Th. 4:15 Τοῦτο γὰρ ὑμῖν λέγομεν ἐν λόγῳ κυρίου, ὅτι ἡμεῖς οἱ ζῶντες οἱ περιλειπόμενοι εἰς τὴν παρουσίαν τοῦ κυρίου οὐ μὴ φθάσωμεν τοὺς κοιμηθέντας· [TOUTO GAR hUMIN LEGOMEN EN LOGWi KURIOU, hOTI hHMEIS hOI ZWNTES hOI PERILEIPOMENOI EIS THN PAROUSIAN TOU KURIOU OU MH FQASWMEN TOUS KOIMHQENTAS·]I should say first of all that it is not our practice on to discuss doctrine as such; the passage you ask about is certainly open to a variety of interpretations, but our limited focus here is on elucidating the possibilities of understanding the Greek text.Note that EIS here is used with an article THN and then the noun PAROUSIAN. The natural way of understanding PARALEIPOMENOI EIS THN PAROUSIAN TOU KURIOU is “left behind for/until-such-time-as the coming of the Lord.”> Should EIS be translated as “to,” “till,” “until” or “up to” and thus convey the idea that the “rapture” event could be expected early in the PAROUSIA or, should it be translated as “for” or “during” the PAROUSIA and leave the timing of the “rapture” indefinite?I think you are asking more questions than the Greek text will provide clear answers to

FacebookTwitterSubscribe
Subscribe to receive all news to your email or phone: [wysija_form id="1"]
4:15explainedparousiapaulrapturethess

Are BATHROOMS still an issue for the Christian Church?