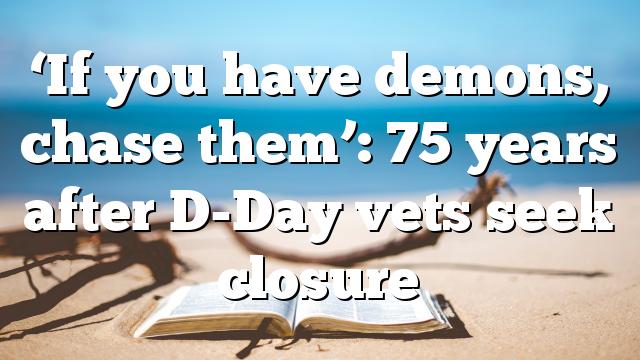 OMAHA BEACH, France – On the anniversary of one of history’s most infamous battles, a handful of survivors have returned to Normandy’s D-Day beaches, some for the first time since that fateful day, in hopes of finally putting their demons to rest.

Many veterans returned to Omaha Beach in the name of duty, honoring the fallen comrades they were forced to leave behind. For others, the prospect of returning opened up memories that were suppressed for decades, and for good reason.

Regardless of how people remember D-Day, many fear the world is forgetting and the returning veterans want younger generations to hear their stories so that they can be passed on to future generations.

Jerry Deitch, from Nevada, was 18 years old when he landed on the beach in Normandy 75 years ago.

“After the first day I felt like I was 30. I went in a little boy and came out a man. You grow up fast,” Deitch said.

The survivor of the bloody battle on Utah Beach, one of the five D-Day beaches, had always refused to go back to Normandy. “I said, ‘No,’ I said, ‘I don’t think I can handle it. I’ll get too emotional,'” he recalled.

Now 93 years old, Deitch decided he wanted to return to the spot where his friends died and revisit the place by a seawall where he was hit by a piece of shrapnel that left a fist-sized dent in his helmet.

For Deitch, speaking to his family about his experience was simply too difficult. He recently found solace in writing his recollections down, hoping one day, his loved ones would understand what he went through. “I did a few chapters just before I came here,” Deitch said.

“It changed my life, yeah,” he said of D-Day. “It taught me to be very tolerant. God gives us free will; you’ve got to use it.”

Having long kept his internal war to himself, Deitch thanks people for listening to his recollections now.

“I feel better when I speak about it,” he said. “If you have demons, face them.”

Onofrio “No-No” Zicari stormed Omaha Beach when he was 21 years old. He managed to evade sniper and artillery fire, but could not escape the nightmares and trauma he would battle for the rest of his life.

After his caretaker had suggested the now 96-year-old Las Vegas resident return to Normandy, Zicari made his first trip back to France for the 75th anniversary of the most harrowing day of his life.

Zicari was able to make the trip thanks to Forever Young Senior Veterans, a nonprofit that organizes trips for veterans of U.S. wars, allowing them to visit the battlefields that changed them forever.

“Maybe this will bring me some closure,” Zicari told the U.S. Department of Veterans Affairs. “So that’s why I’m going. Maybe there is something there that will help me put this all behind me. I’m 96 years old, how much longer can it go, you know?” he laughed. “Maybe I’ll see the beach.”

Zicari found support in facing the beaches once again through his PTSD support group through the VA of Southern Nevada.

The group, consisting of World War II, Korean, and Vietnam Veterans, meets once a week for emotional support.

“I was relieved when I was talking to the other Veterans. They understood my feelings. And I’ve stayed right there with them for nearly 30 years.”

There were six fellow WWII veterans when Zicari joined the group — now he’s the only one.

Zicari refused to go if his caretaker and family friend wouldn’t accompany him, and it wasn’t just the logistics of travel that kept the veteran from returning to those fraught beaches. Zicari said that the trauma of that day left him with PTSD.

“I was having nightmares, in fact, I just had one the other night. This all brings back a lot of memories for me,” he said.

As time goes by, the memory of war fades. According to The National WWII Museum, 348 WWII veterans die every day, and many irreplaceable memories go with them.

The inevitability of all veterans of the 1939-1945 war soon being gone is acting as a clarion call.

From across the globe, people are converging on Normandy to follow in the footsteps of, perhaps even rub shoulders with, the remaining men and women who made a military success of D-Day.

The Associated Press contributed to this story.

So if we say that a church person can never OSAS

So if we say that a church person can never be demon possessed, isn’t this some sort of Charismatic Eternal Security (CES/OSAS), to say…