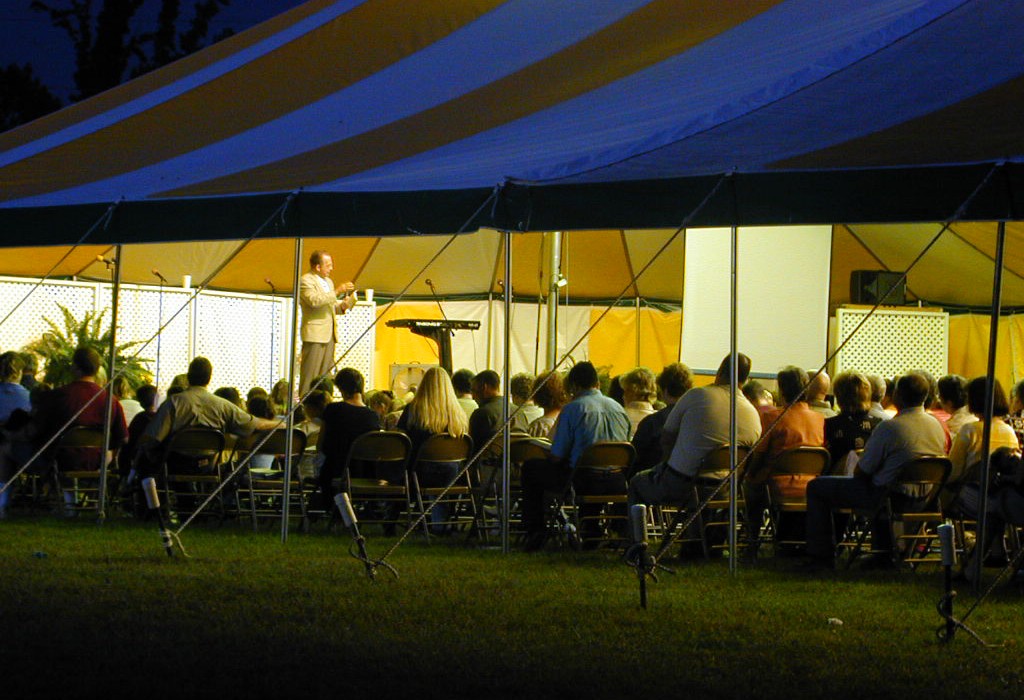 I believe we need a revival of personal prophecy more than ever!

John Kissinger [11/06/2015 11:33 AM]
wait – that lady behind you just showed emotion – this makes your message invalid according to Link Hudson http://www.pentecostaltheology.com/a-motion-for-a-pentecostal-emotion/b

Link Hudson [11/06/2015 3:38 PM]
John Kissinger I think you know you are twisting my viewpoint for the sake of humor. I’m not against people having emotions or even showing them. But I don’t think we should consider people showing emotions to be the Holy Spirit. I also see a problem when preachers preach stuff about emotions that the Bible doesn’t teach or emphasize instead of focusing on the word of God.

And I don’t think a church service has to look like an episode of Hee Haw run at twice normal speed with a bunch of clog dancing to be for the Spirit to be moving. There are different cultures and styles around the world.

John Kissinger [11/06/2015 3:40 PM]
I am also wondering if Ricky Grimsley thinks God knew that lady would pass by the window behind Peter A Vandever with such great emotion 🙂 I am somewhat opposed to conditional prophecies (when used by false prophets whose prophecies did not come true)

Link Hudson [11/07/2015 3:09 AM]
There is a seeker sensitive mega-church in my town. I’ve never seen anyone go there to prophesy in the congregatin at the Sunday service, but I hear if someone tried to do that or give a message in tongues or interpretation, that they would shut it down. It’s actually a Foursquare congregation, which is a Pentecostal denomination, but most people that atted probably don’t know that.

But I was talking with a pastor at a church plant off of this big church. He says the senior pastor is gifted in prophecy.

I don’t get it. I don’t know why church leaders would prioritize dance performances and things like that in the meetings and not allow for prophecy and tongues with interpretation. To me, it seems like genuine prophesying is great for evangelism. Paul gives an example of this in I Corinthians 14, where the man’s secrets are made known through prophecy and he falls down on his face an says that God is truly among you. I know someone who was led to the Lord through a prophecy or word of knowledge, and I know of people who’ve experienced this sort of thing.

The Bible also shows us examples of people who believed after witnessing miracles and healing. If the goal of seeker-sensitive is to reach more people, does it really do a better job than signs, wonders, miracles, and healing?

But we have to be dependent on God and believe Him for healing, prophecies, etc. People can have a program, with singing and dancing, under their own control.

Sonja Wilson-Horn [11/07/2015 12:27 PM]
Well said my brother . You are not the only one that feels that way. Was have lost the power of God. The fire has been snuffed out due to demonic forces whispering lies in Christian ears until they start believing . Example: be sensitive to new members concerning tongues , shouting , and the fire of God for we don’t want to scare them. Years ago we didn’t worry about that, the fire fell and those who wanted it , sought it. I was one of those not raised in a full gospel church but started going to one . Was I scared ? Yes. Did I stop going ? No. I want getting ready I knew there was power and there was something I needed at this place ! No one was seeker sensitive . No one gave me a 30 minute explanation about why this or that was happening . The Holy Ghost drew me and he gave me the knowledge and desire to seek the fire . Some things can’t be explained they have to be experienced . I’m glad the church I went to wasn’t seeker sensitive, but Holy Ghost sensitive !!!

Link Hudson [11/07/2015 2:21 PM]
Sonja Wilson-Horn, I can find in the Psalms where it says to shout to the Lord. I can’t see where the Bible says that the shouting is a move of the Spirit. The Holy Spirit can move through prophecy and other gifts in meetings that aren’t wrapped in enthusiastic Pentecostal packaging. I grew up in Pentecostalism, and sure, I heard plenty of prophecies and tongues and interpretation. I’m not speaking bad about them, but a lot of them sounded like encouraging passages of scripture or paraphrases strung together, mixed in with phrases we’d hear in sermons and hymns.

Later, in life, I met with some folks where the preacher didn’t get all worked up and preach loud with a preacher voice (not all the Pentecostal churches I went to were like that before). People praised and worshipped the Lord, but it wasn’t really Pentecostal style. And when people prophesied, they didn’t speak loudly in King James English. Some people would till prophesy, and they’d have visions, or have a kind of prophetic or word-of-knowledge prayer where they knew all about you. It sure seemed like people in these non-southern-Pentecostal-style movements operated a lot more in these gifts in an obviously supernatural way than the Pentecostal church I’d been going to.

As far as tongues go, the Lord gave some commands on how we are to use them in church meetings through Paul in I Corinthians 14. One of Paul’s lines of argument is how tongues effect unbelievers.

John Kissinger [11/29/2015 9:17 AM]
Conditional prophecies and A NOTE ON PROPHETIC DUALITY: Is the Temple of Ezekiel 40-40 Millennial, PreMillennial
or the New Jerusalem? http://originofnations.org/HRP_Papers/Prophetic%20duality.pdf

John Kissinger [12/08/2015 7:41 AM]
Pretty sure this was the topic where Peter A Vandever brought the question about the Kansas City Four but not certain why the comments is gone? Anyway, 2 streams of restoration came forth in 1947-48. one was the Latter Rain Movement, which restored the practice of…the laying on of hands…as well as extensive congregational prophesying one of the father figures in the Latter Rain Movement was a man named David Shoch, while William Branham was a strongly anointed leader in the Healing and deliverance Movement. As a matter of fact, the current expression of the modern prophetic movement in America appeared in the late 1980s, centered in multiple locations: yet was distinctly at that time in Kansas City Fellowship (later Metro Vineyard Fel-lowship, then Metro Christian Fellowship, and today iHop-KC) in Kansas City, Missouri. its then lead pastor was, Mike Bickle, along with prophets such as Bob Jones, John Paul Jackson, Paul Cain, and others. at that time, i also, was recognized as one of the “Kansas City prophets.”
http://www.pentecostaltheology.com/growing-in-prayer/

John Kissinger [12/08/2015 7:49 AM]
not according to Jim Goll, the comparative quote is from his book The SEER. Goll sees them all and the same (at least) in the Spirit Jon Sellers

John Kissinger [12/08/2015 7:55 AM]
I see your point, but Jim Goll was also there and he stated “Kansas City Fellowship (later Metro Vineyard Fel-lowship, then Metro Christian Fellowship, and today iHop-KC)”

John Kissinger [12/08/2015 8:01 AM]
So if IHOP aligns with NAR’s prayer (SLSW) and social gospel does this make them a product of the KGB? http://www.pentecostaltheology.com/gutierrezs-book-a-theology-of-liberation-designed-by-kgb/

Charismatic Theology [12/14/2015 4:57 AM]
Every Christian has four eyes and four ears. You are given one
set when you are born and another set when you are born again.
Through prophetic dreaming, God can communicate direction
to you that perhaps you would not be able to hear while awake
in your distracting environment. This is the entire basis behind
the idea of this book about seeing the voice of God, because
it involves communication without speech. We all know it is
possible to communicate without words. Baseball players do it.
Participants in a game of charades do it. Animals do it. Even
babies do it.

Is Ted Cruz a declared Christian?