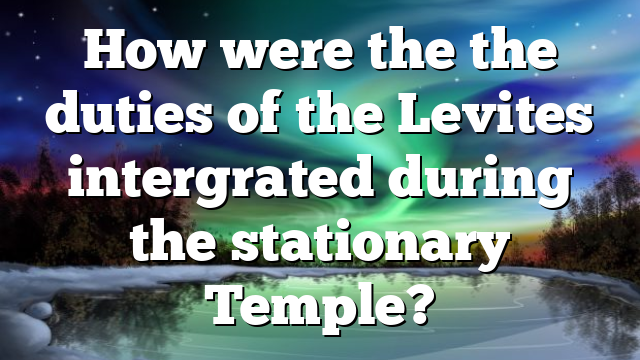 When the first mobile tabernacle was built three divisions of the Levites namely Kohathites,Gershonites and Merarites were allocated different duties.Their duties entailed carrying the mobile tabernacle and its various vessels

This is the service of the families of the Gershonites, in serving and in carrying: 25 they shall carry the curtains of the tabernacle and the tent of meeting with its covering and the covering of fine leather that is on top of it, and the curtain for the entrance of the tent of meeting, 26 and the curtains of the courtyard, the curtain for the entrance of the gate of the courtyard that is around the tabernacle and the altar, and their ropes and all the equipment for their service; and everything that is to be done [n]by them, [o]they shall perform

“As for the sons of Merari, you shall count them by their families, by their fathers’ households; 31 Now this is the duty of their loads, for all their service in the tent of meeting: the boards of the tabernacle, its bars, its pillars, and its bases, 32 and the pillars around the courtyard and their bases, their pegs, and their ropes, with all their equipment and with all their service; and you shall assign by names of the men the items [r]that each is to carry.

How were the different duties of the three divisions integrated in the service of the stationary temple in Jerusalem?

Glory in Your Story